Suspended in Brine – Pickling with Cornersmith

The team behind Marrickville’s Cornersmith cafe have garnered a cult following for their wholesome pickles and preserves. We drop by for a two cheese and pickle toastie and a chinwag about community. 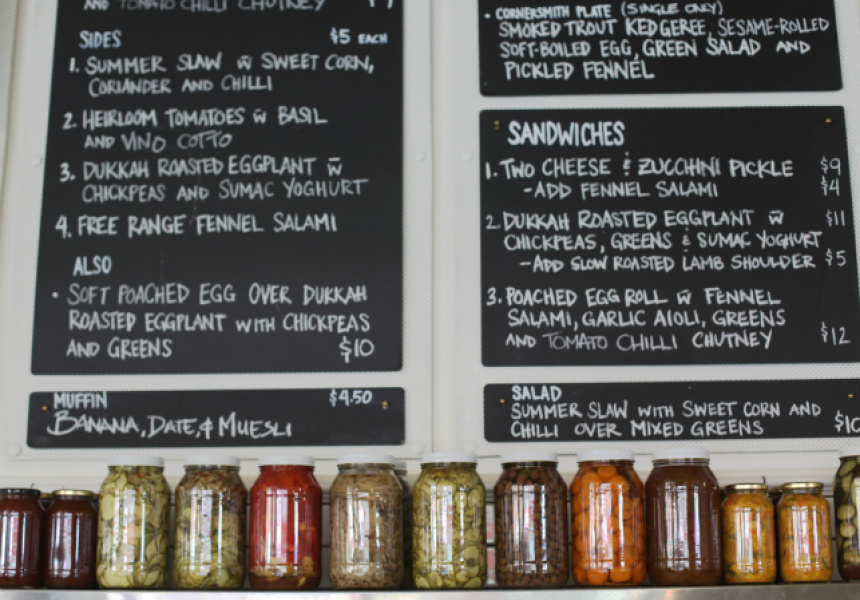 We arrive at Cornersmith on a Monday afternoon in the thick fog of high summer. The cafe is closed, as Monday is pickling day, and crisp green cucumbers stand to attention in a bucket on the counter, ready to be sliced by the glinting edge of a sharp mandolin.

Above the stove sits a row of huge glass jars. Cucumber and zucchini pickles – sliced paper thin and flecked with dried chilli – sit beside vessels brimming with swollen pickled cumquats, perfect for stuffing inside a roast chicken, cinnamon quills tucked between them. A little further along are some smaller jars of ruby red tomato chutney and mustardy piccalilli. The cafe is light with huge windows that cast a bright reflection on all these beautiful jars. It’s impossible to miss them, even if you hadn’t come here for them in the first place.

The menu, chalked up on huge boards high on the kitchen wall, reads like nothing else in Sydney. “I thought we’d base the menus around what we were preserving. So on every element, somewhere, there’s something that’s been pickled or preserved,” says Alex Elliott-Howery, Cornersmith’s resident pickle-pusher, who opened the cafe with her husband James Grant in December 2011.

“We want [the pickles and preserves] to be really accessible, which is why we put everything on the menu, so people can see how they’re used,” says Elliott-Howery. A ploughman’s plate sets the scene for Indian-inspired piccalilli with fennel salami, sharp cheddar, fruit and toast to accompany, while the Cornersmith plate sees pairings of smoked trout kedgeree, a soft-boiled egg rolled in sesame seeds, green salad and pickled fennel – sharp and crunchy. “You don’t want a soggy pickle. I also like a more sour taste than sweet,” Howery divulges. “You really don’t want to taste the vinegar; the brine has to have the right balance. You want to taste the spices, but you don’t want them to be overpowering.”

At Cornersmith, the produce is the star of the show and a focus on local and seasonal fruit and vegetables has changed the local community in more ways than one. “The thing that’s been amazing here is when we put little signs out for backyard produce and people drop in their excess,” says Elliott-Howery. Currently, a call-out for tomatoes, chillies, basil, zucchinis and stone fruit grown in neighbouring Marrickville backyards is chalked up on at the bottom of the menu, all of which are bartered for.

“The majority of people don’t want anything in return,” she says. “They just don’t want to see it rotting in their back garden.” So preserves it is. Last winter saw over 100 kilos of citrus turn up on their doorstep, which meant that marmalade, preserved lemons and pickled cumquats lined the Cornersmith shelves for weeks, bottles and bottles going home with the neighbours that provided the fruit in the first place.

It sounds like a system likely to have stemmed from a small country town, not the inner west of sprawling Sydney. But Elliott-Howery is quick to point out that “You can do all this and still live in the city – that’s really important for people to know. I have no interest in living in the country; I’m very urban. I like that, on a small scale, you can have community in the city. You can have sharing of produce and you can know where your produce comes from. It’s just everyone pooling together and making the right choices where we can.”

It’s a philosophy that defines Cornersmith. “I remember when we were writing our business plan, I wrote down that it would be great to sell 10 jars of pickles a week,” she says, grinning. “We made so many cucumber and zucchini pickles last year, thinking they’d last us the whole year, but of course they didn’t.”

So after one full year in the cafe, the team were excited to be back in the midst of summer and the glut of produce – such as zucchinis and cucumbers for pickles – that it brings with it.

Nothing on the menu is tricked up or disguised, but merely accentuated by a few spices here and there. A toasted sandwich of two cheeses (house-made labneh and slices of sharp vintage cheddar) and a pickle that rotates depending on the time of year, is a local favourite. It’s simple and completely unfussy yet, at the same time, wonderfully refined, each ingredient at the peak of its potential. Elliott-Howery rattles off her favourite combinations they’ve pickled over the year: spiced grapes for cheese plates, pink pickled onion and crisp strips of choko. A staff tomato-canning day is coming up soon and pickling classes are in the works at a dedicated pickling site up the road.

“Education is the way to go this year,” says Elliott-Howery with a determined look. “I was a bit meek about it last year because I didn’t want to ram my philosophy down people’s throats. But I have the knowledge and I’m happy to put it out there. People should learn how to do this stuff…it’s not hard!”

A country philosophy with a city edge – we could get used to this. 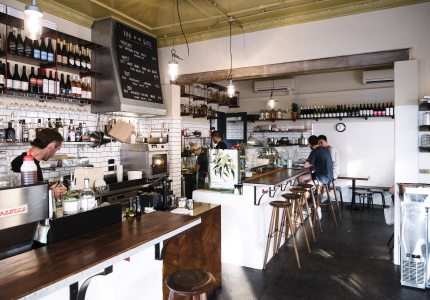