Its banging jaffles are filled with the likes of smoked ham and cheddar, truffled mushroom and ricotta, and bolognaise. 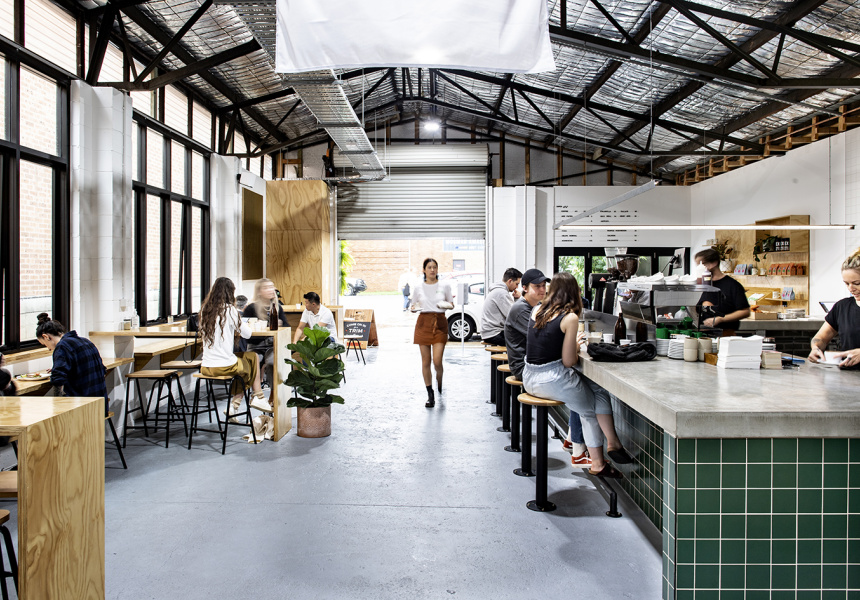 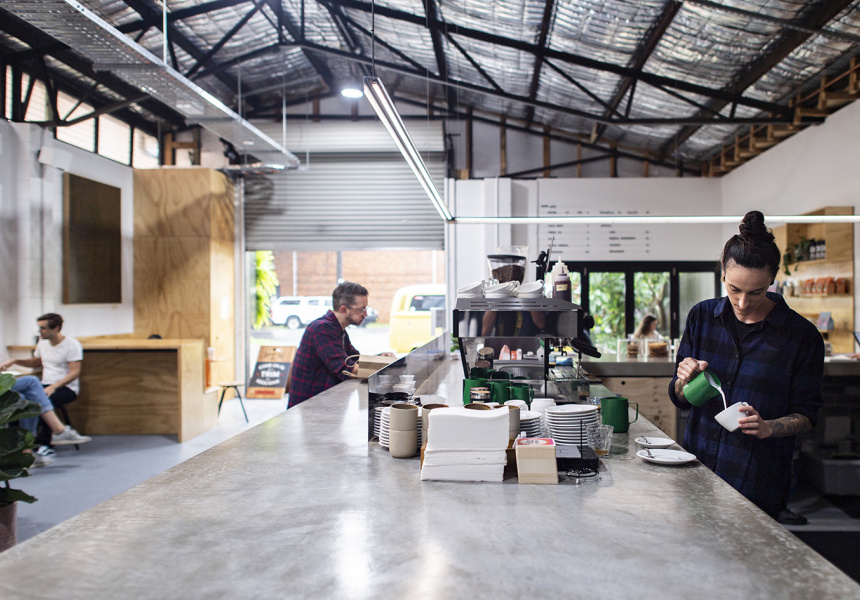 Frangipani trees frame the window bench seat of a former warehouse in Brookvale. A bicycle shop, men’s barber and cafe all share the relaxed space, where locals sip coffee to a soundtrack of spinning vinyl. No-fuss industrial interiors are lent pops of colour from indoor plants, a countertop perched on a green-tiled base and orange tables.

It’s the site of Super Okay, a new cafe by Bo Hinzack, who’s also one of the founders of Manly’s Rollers Bakehouse. Hinzack opened the cafe in January; it takes its name from Okay Coffee, the roasting business he runs in partnership with Melbourne-based Aaron Wood (of Melbourne’s Wood and Co).

“Having been in the coffee industry for a long time, you see a lot of pretentiousness around it at times and that’s not Aaron and I – at all. We wanted to dial it back and make coffee a lot more accessible to the average punter. I think that’s where we came up with the name ‘Okay’. We just wanted an everyday name,” Hinzack tells Broadsheet.

The Mitchell Road site is a two-in-one for the pair: Super Okay is the coffee bar up the front, while the roasting operation of Okay Coffee is soon to open behind the cafe, with a Loring roasting machine – currently being made in California – set to arrive in July.

Hinzack’s friend Justin Roscoe, the owner of Sticky Bottle bike shop, approached him in July last year with an idea for a place where “a bike shop and coffee collide”.

On weekdays, morning cyclists roll up for their first caffeine hit of the day. Come the weekend, a melting pot of locals with babies, prams and dogs settle in.

The food menu is deliberately simple to ensure coffee remains the focus. But that doesn’t mean it’s not well-considered.

“That dirty word ‘jaffle’ came into my head and I thought, ‘Gosh, I wonder if we could do a great jaffle,’” says Hinzack. “If we get great bread and use really good ingredients, I wonder if that could be something?”

Turns out, his hunch had legs. Super Okay’s bestseller is its smoked ham, cheddar and bourbon-relish jaffle, served with pickles and mustard on the side. Other flavours include truffled mushroom and grated ricotta; smoked salmon with cream cheese, capers, lemon and dill; and classic bolognaise. They’re made with bread created specifically for Super Okay’s jaffles by nearby bakery Berkelo – it’s effectively a sourdough brioche.

Pastries are sourced from Staple Bread in Seaforth, and there are Assembly teas from Melbourne and zero-alcohol beer by Heaps Normal. Plans to obtain a liquor license are afoot, so the cafe can stay open for after-work drinks and jaffles.

The ethos behind Okay Coffee centres on ethical supply.

“It’s about traceability, great coffee, direct trade and cutting out the middle man so that the farmers can have more money in their pockets – because that’s what feels good,” says Hinzack. Okay Coffee works with North Manly green-bean supplier Caravela.

Beneath shelves of coffee bags and jars of gin-spiked pickles, the presence of a turntable fulfills a long-held dream of Hinzack’s.

“I always wanted a record player in my shop, but they have never been big enough,” he says. “But it turns out changing records during service is really hard. We actually had a Brookvale local come out here on a Friday and he played DJ for four hours – it was great.”

Bags of Okay Coffee beans, with their orange, retro-style label on biodegradable packs, are available to purchase, and both Hinzack and Wood hope their love of brewing coffee at home will catch on too.

“We really try and push home brewing for no reason other than that there’s a nostalgic factor there. It’s fun and it should be about making yourself a cup of brew, knowing its origins, traceability and the two guys who are behind it – and sitting in the sun.”