A little bit of history gets a makeover at Heritage Coffee Brewers. 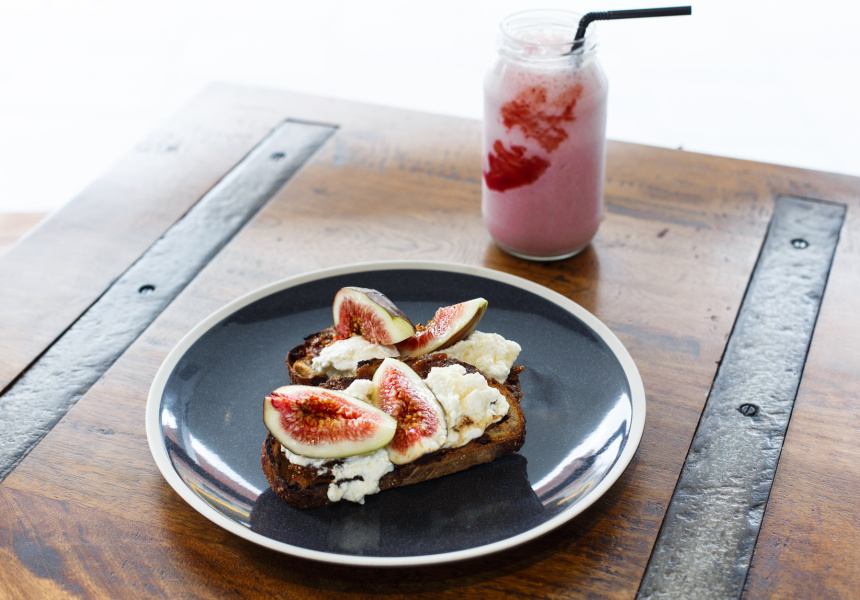 “Sippet (noun) – a traditional offering from Georgian England. First mentioned in 1685 as a piece of toast or bread usually served with gravy.” So reads the menu at Heritage Coffee Brewers – the newest cafe in Summer Hill – neatly explaining its house specialty of toast with toppings, but not as you know it. The cafe opened on Australia Day and is the work of coffee veterans Andrew Carter and Dan Kim, who have been seen at The Source, Brewtown Newtown and Bean Drinking.

“I stumbled on the idea of a sippet in the UK,” says Carter, who is originally from Cheltenham, England. “In Georgian England it was a kind of filler. If people couldn’t afford meat they would use it to bulk out a meal. But we do it as fresh toast with braises and new toppings.”

Sippet toppings at Heritage include simple and sweet ricotta, fig and local honey, or strawberry with fresh berries, lemon ricotta and basil. For savoury, try a benedict with fennel, tarragon and house-cured salmon, or 12-hour beef cheek with kale, cheddar and pickled carrot. The bread that underpins it all is by Brickfields. But it’s not all toast and toppings, there’s Korean pulled pork with kimchi slaw on a milk bun, as well as decadent sweets including huge sea-salt chocolate cookies, peanut-butter crunch cups, homemade jams, house sodas (blood orange and cardamom; elderflower; or apple and ginger) or the peanut-butter-chocolate-fudge milkshake.

As expected with such credentials, the coffee here is a thoughtful offering. Milk-based espressos are Mecca beans, while V60 filter (hot or iced) and batch brew are rotating guests, beginning with Reuben Hills and following up with the UK’s Square Mile. The cafe’s mantra: “weigh, measure, time, repeat” is a testament to the team’s focus. There’s a lot of history at Heritage (from the menu image to the idea of the sippet), but there’s nothing old fashioned about it. And winter promises rabbit and other gamey sippet toppings. Gravy on bread has never sounded so good.