In Suburbia, Fried Chicken Two Years in the Making 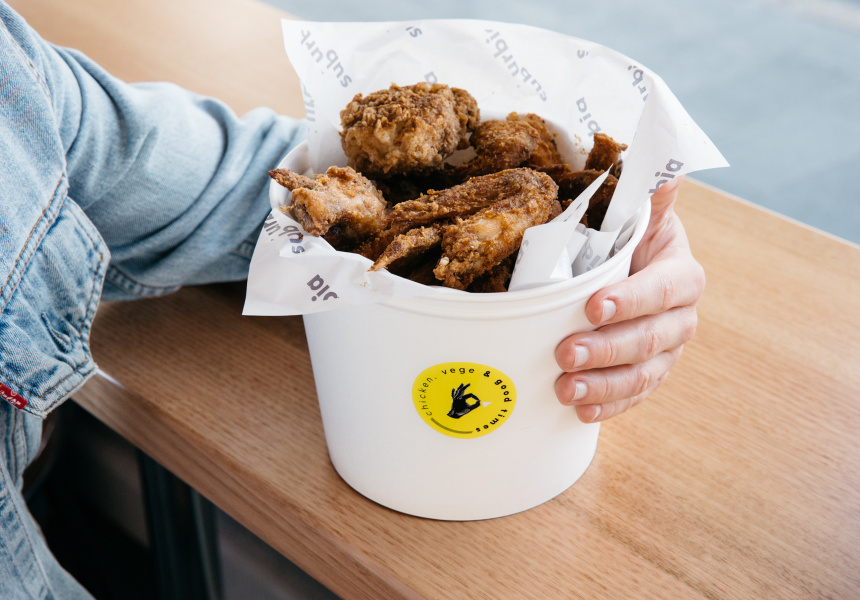 Sydney is no stranger to fried chicken – there’s Butter, Belles Hot Chicken and Thirsty Bird. There wasn’t however, a thriving fried-chicken scene north of the bridge, prompting husband and wife team Doug and Kylie Fraser to sell their restaurant in Narrabeen and give the genre a go. “There’s definitely nothing there, apart from KFC in Manly,” says Doug, who spent the past two years developing a spice-mix recipe for the chicken.

Preparing the chicken is a two-day process. It’s first honey-brined, then slow cooked and finally flash fried in a house-made bread mixture. “This is to minimise the amount of oil the chicken absorbs, while also keeping it crisp on the outside and moist in the middle,” says Doug. It’s then seasoned with the spice mix.

Although it’s primarily a fried chicken restaurant (the chicken can be ordered as wings, tenders, in a burger or on a waffle drizzled with maple syrup) there’s an equally strong emphasis on vegetable dishes. “My mum’s Japanese so there are a few Asian things that have slipped on the menu,” he says.

One to try is Grains and Greens, an inventive dish of snow peas, chickpeas, almonds, cured egg yolk and mirin dressing. To Doug’s surprise the baked eggplant with Korean miso, sesame seeds and buffalo mozzarella is one of the most ordered options. “A lot of people don’t even like eggplant and like this dish,” he says.

The drinks menu is relatively small, with a well-curated selection of beers and wines ( several of which are either natural or organic) as well as cocktails. The watermelon Margarita is a highlight – a mix of Blanco tequila, watermelon juice, strawberry and lime. For a balmy summer evening with friends, grab a jug of the summer Sangria, made here with white wine, lemonade, ginger ale, seasonal fruit and mint.

The space exudes a fresh, summery feel. Giant Designs was in charge of bringing the “Venice Beach and Santa Monica-style vibe”, and have broken up bright white surfaces with leaf prints and pops of canary yellow.

We suggest you park yourself on one of the stools at the counter that runs the length of the open window facade and people watch the evening away.