The Story of the Dulwich Hill Hot Bread Shop

It looks like any old inner-west bakery but it’s home to one of Sydney’s true masters. Luigi Carrieri has been making traditional Italian bread for Sydney’s inner west for more than two decades, but outside of Dulwich Hill hardly anyone’s heard his name. Carrieri, a fourth-generation baker, still makes everything by hand and feel. There’s no accelerated fermentation, machine kneading or golden recipe, just water, flour, salt and yeast combined with Carrieri’s 60 years of knowledge.

From the outside, Dulwich Hill Hot Bread Shop looks as basic as its name. It would be completely anonymous lined up in a street with Sydney’s other bakeries. There’s no sign, literal or metaphorical, indicating anything of Carrieri’s history or passion. The only guide to the bakery’s true worth is the constant, mesmerising scent and the line down the street on weekends.

“We make bread totally differently from other bakeries,” he says. “A lot of people think we put sugar in, but it’s not sugar, it’s the fermentation process.” The flavour of Carrieri’s bread is borne from an Italian-style pre-fermentation called biga. There’s no fridge at Dulwich Hill Hot Bread Shop, instead there’s a cluster of repurposed garbage bins housing Carrieri’s working doughs. Occasionally he’ll peek in one and grope its sides to test its readiness. There’s no set time; it depends on the humidity, the temperature and the flour itself. Australian flour is notoriously difficult to bake with because of the varying protein and gluten levels. When it’s ready, Carrieri will know, his eyes know the exact hue and shade of a perfect dough, while his hands know intimately what texture is needed.

Before biga was popularised with the introduction of baker’s yeast, most Italian bakers made sourdough. Carrieri’s father was one of them. The family grew up in a bakery in the idyllic Pugliese town, Fasano. Talking about it makes Carrieri simultaneously smile, laugh and cry. While Italian life was good to him, it wasn’t right for his father’s business. “He was a very hard-working man, he had to employ a lot of family members to actually make that kind of dough – every three of four hours we used to go and refresh the dough.” When Carrieri was 18, his father, like many Italians at the time, decided the family had a better life waiting for them overseas. “For me it was very hard, I was still going to school, I was doing some surveying. I didn't want to come to Australia.”

When the family arrived Carrieri’s father opened a bakery, but instead of selling sourdough – the product he’d been making since he was a kid – he opted to produce what most other Sydney bakers were making: instant bread. “He made a big mistake. He’s a very talented baker but he’s not a good businessman. He could have been making the best sourdough for 40 years.” Carrieri’s father didn’t want to make sourdough for the same reason Carrieri didn’t want to bake, the terrible lifestyle and hours.

“I come from four generations of bakers, but I didn't want to be one. I was never interested. I never, never, never wanted to be a baker.” After a few years in Australia Carrieri’s life settled. “A lot of people don’t realise the effect of the evolution of life. I was married, I was 25, I didn’t know what to do so I said I better start doing what my father was doing.” After a seven-year trial with a bakery in West Ryde, Carrieri opened Dulwich Hill Hot Bread Shop in 1997. Using a fossil of an oven he adopted from the store’s previous owners, Carrieri revolutionised bread in the area. “After the first day, everyone says, ‘What is this?’ After one year we doubled the amount. People say, ‘Wow, this is bread’.”

It’s typical Italian bread, simple but far more nuanced. The dough is subtly sweet and sour simultaneously. Inside it’s soft but dense to chew and the outside crust is crackable. Like Carrieri himself, it’s familiar and full of character.

Now 62, Luigi still makes bread daily with his own hands. His dad, 88, works two days a week to help out. “I never regret it. When I start learning I just realised, just like a racing horse, if you come from that family, eventually you ‘gotta run, you ‘gotta be a race horse.”

Opening Hours
Mon to Sat 5am until the bread runs out 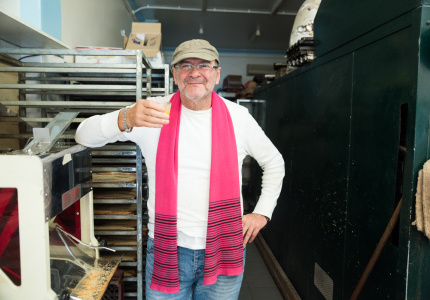