Step-by-Step: How Some of Australia’s Finest Chocolate Is Made

Working with beans from the Pacific Islands, Haberfield’s South Pacific Cacao produces some of the most interesting chocolate in the country. Take a tour of the small site and see how it’s done. 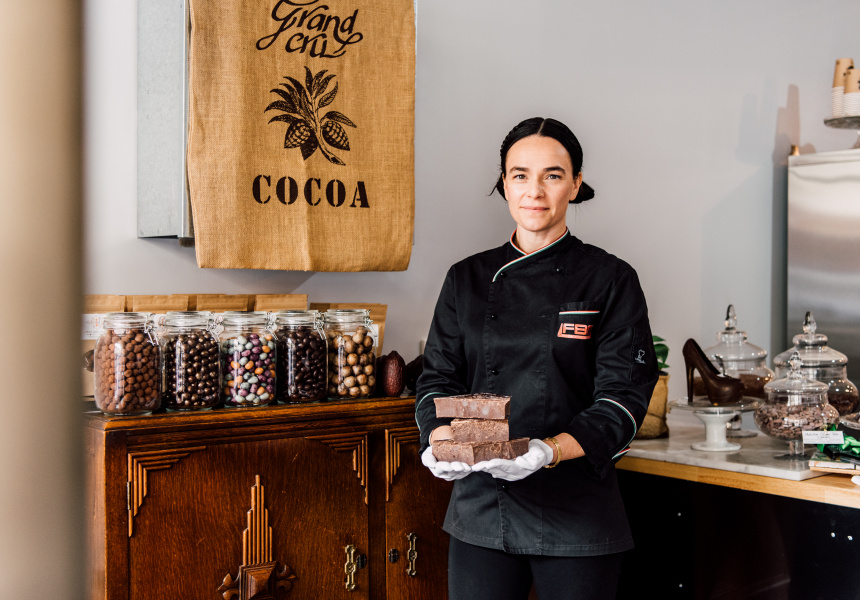 South Pacific Cacao chocolate is unlike anything I’ve had in Australia. One bar tastes like it’s been doused in honey. Another smells like flowers and tastes like it’s been blended with toasted cereal grains. Next season the same chocolate bars might taste like caramel or passionfruit. Yet they contain nothing but roasted cacao beans and a bit of sugar.

This is how chocolate can be when it’s made bean-to-bar. Like wine grapes and coffee beans, cacao beans can express an enormous variety of flavours and aromas, particularly after they’re fermented (a key step in the production of all chocolate). Depending on the season and where the beans grown, one crop can taste quite different to another. These flavours and aromas, though, are only apparent when the beans are carefully sourced from a single origin (one country or growing region) or single plantation (a single farm or small collective of cooperative farms).

In contrast, the big-name chocolate that dominates the shelves at petrol stations and supermarkets uses the cheapest available cocoa powder – usually sourced from multiple locations around the world – to achieve its consistent but generic taste all year round. Sometimes, it’s bought so cheap the farmers don’t even earn a living wage. And many high-end chocolate shops simply work with imported couverture chocolate, rather than buying beans.

That brings us to the other side of this story: South Pacific Cacao, one of the few bean-to-bar chocolate shops in Sydney. The Haberfield-based company is a joint venture between Jessica Pedemont and Brian Atkin. She’s a former Rockpool chef with a flair for making chocolate. He’s a Solomon Islander-Australian who runs Makira Gold, a social enterprise that empowers Pacific Island farmers to ditch the low-quality, low-margin farming geared for the commercial chocolate market. All of South Pacific Cacao’s beans come from Makira Gold.

How South Pacific Cacao chocolate is made 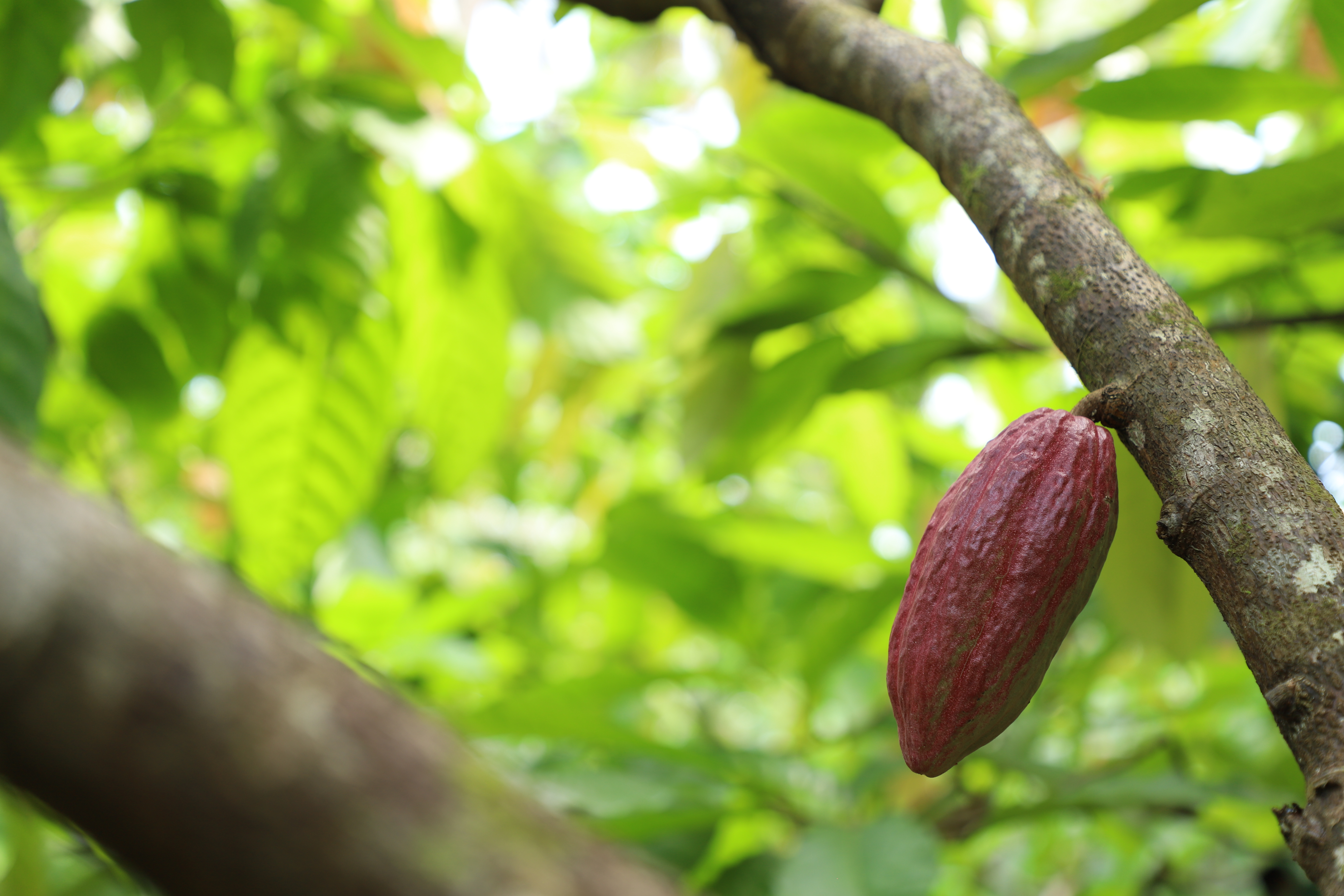 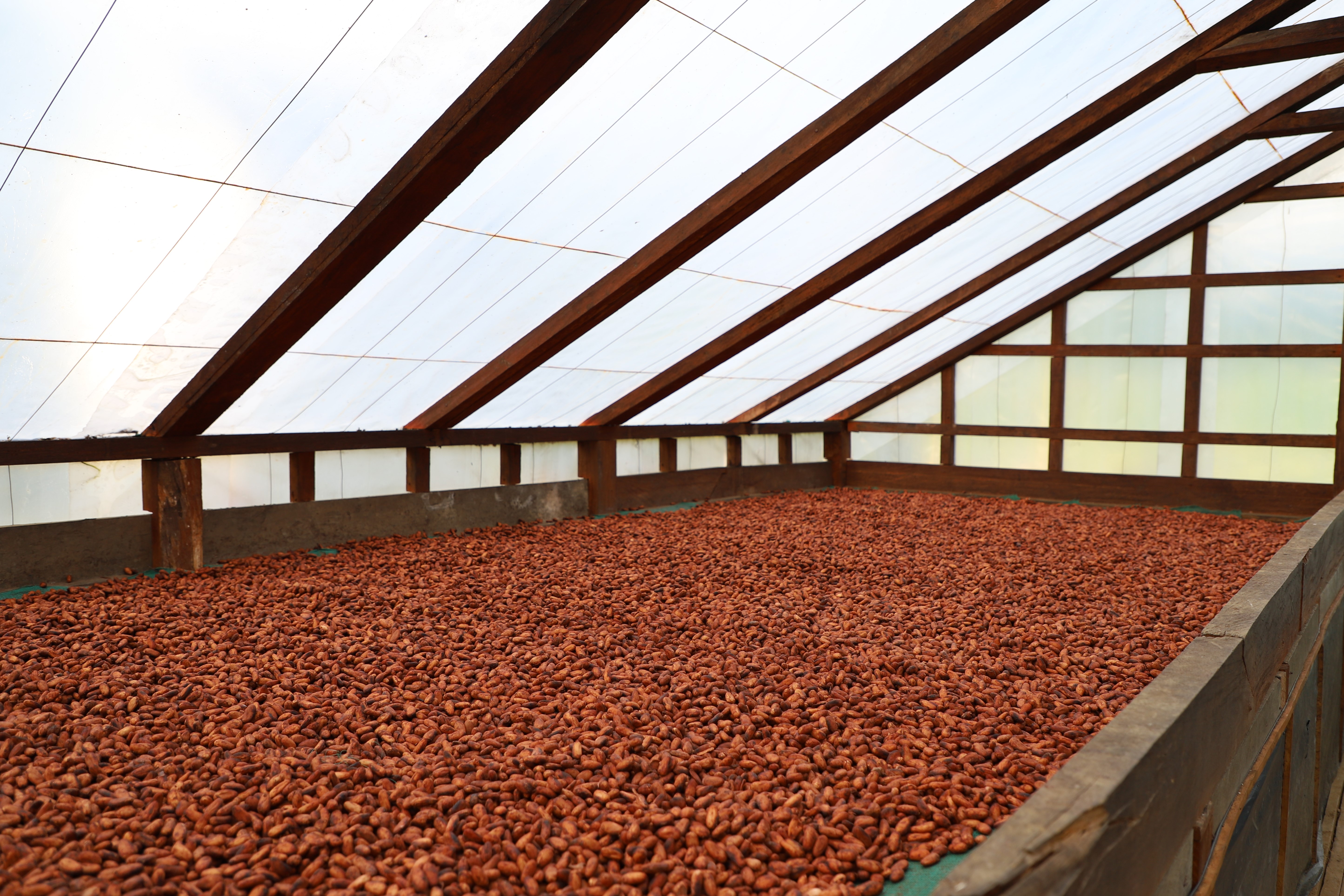 Before the beans get to Pedemont, they’re picked, fermented, dried and packaged so it’s clear which beans are from which farmer. Although the beans vary from season to season, Pedemont knows roughly what flavour profiles are more pronounced in each farmer’s beans. To produce the more distinct flavours – whether honeyed, floral, earthy or citric – and reduce the beans’ natural bitterness, fermentation is key. 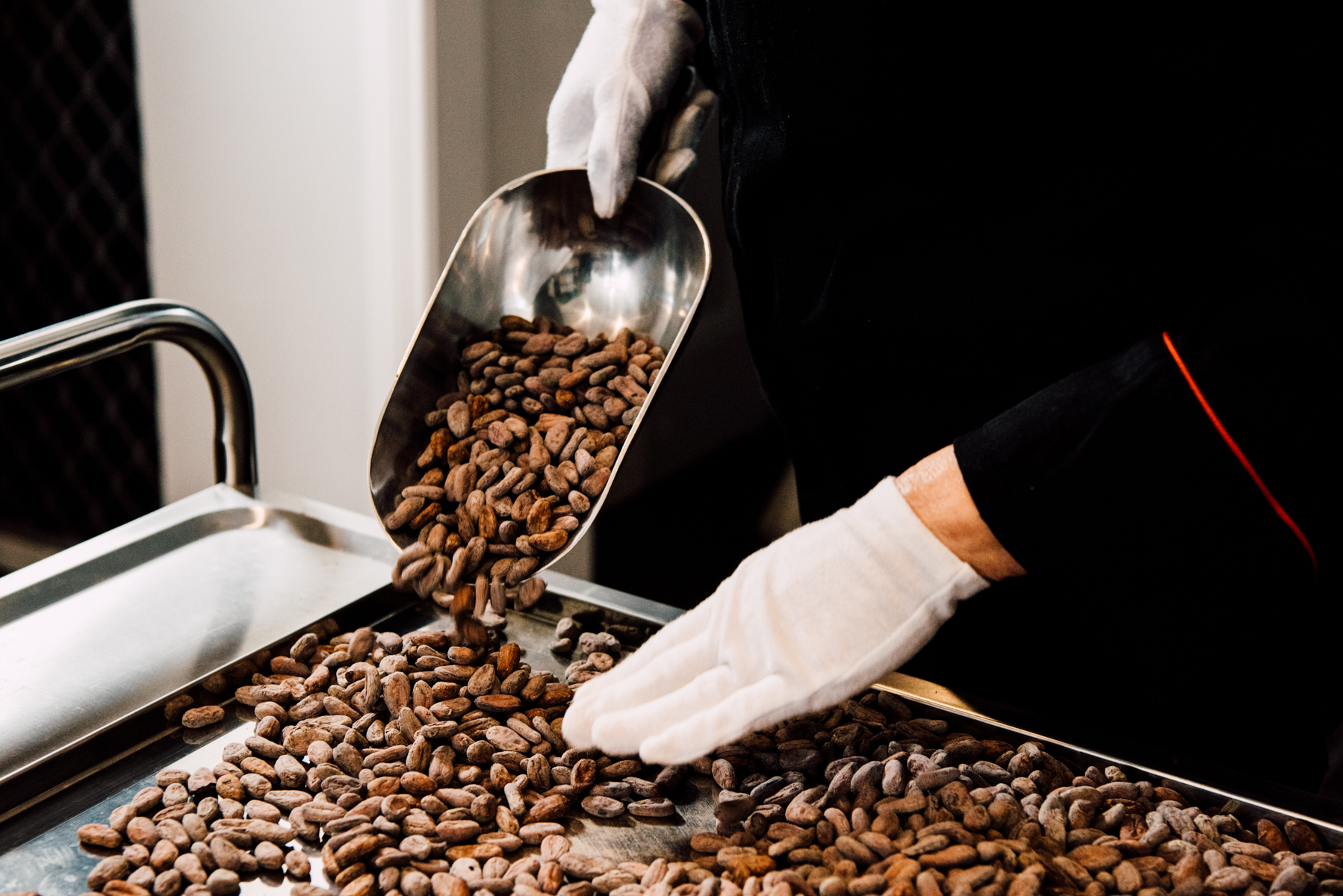 Atkin and his team do a lot of work behind the scenes to make sure the Pacific Island beans are as high quality as possible. Sometimes it’s as simple as providing a hermetically sealed bag for a long dinghy journey, or maybe dealing with the complex problems related to the Solomon Islands’ huge rainfall and exorbitant electricity prices. But like any bag of beans, there will always be a few duds that need to be found and removed. Pedemont does this by hand in Haberfield. 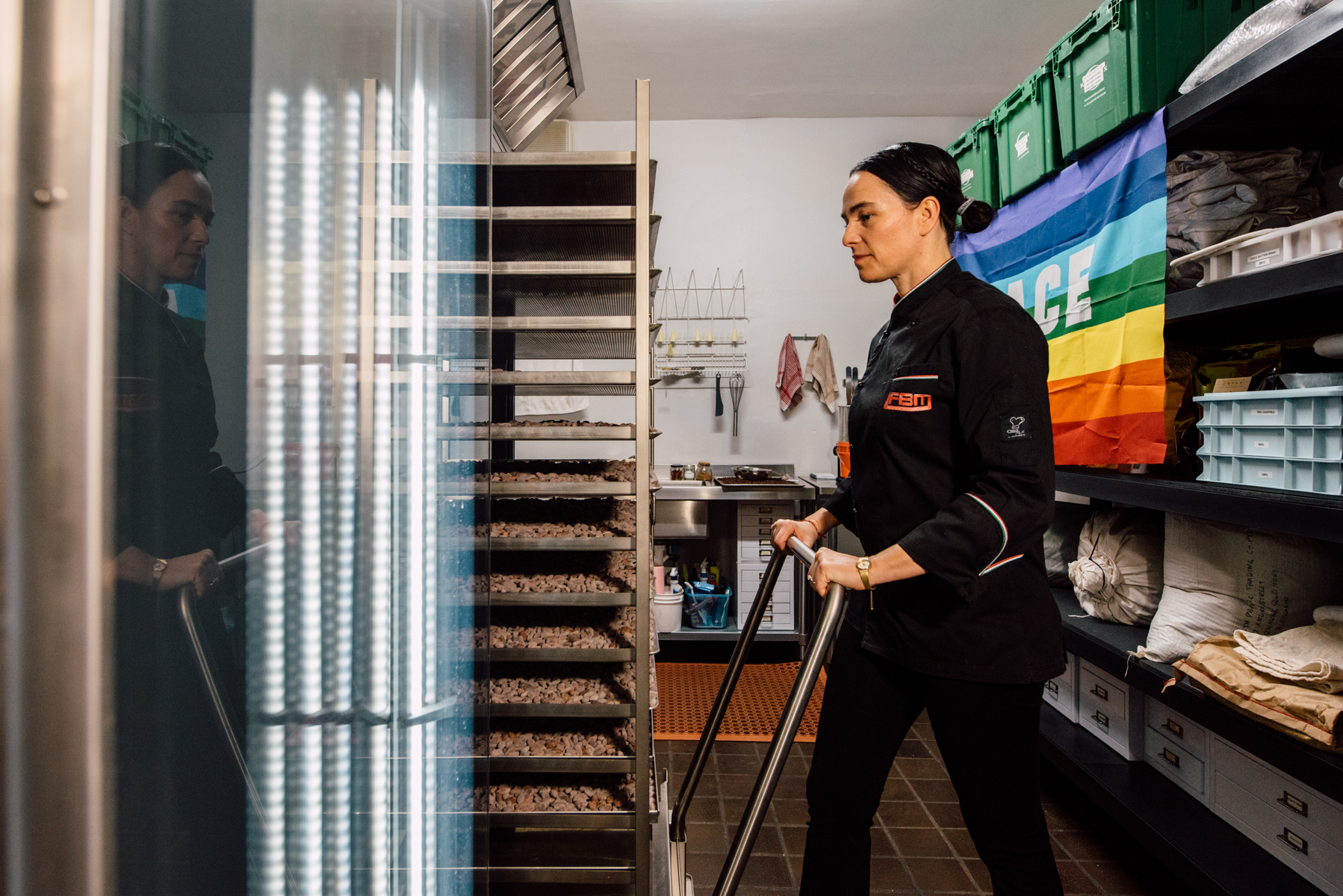 “The biggest component of flavour comes out of fermentation, but roasting is one of the tools a chocolate maker can use to tweak the flavour,” Atkin says.

“A commercial roaster will roast the crap out of it,” Pedemont says. “We don’t roast at high temperatures. We get premium, sun-dried, organic beans that we don’t want to over roast.” Is it like coffee, where a light roast brings out more of the bean’s inherent flavour, and a dark roast results in a more generic flavour? Not really, Pedemont says: “It depends on the bean.” The process of separating the husk from the bean. By hand, it’s incredibly finnicky and time consuming, but Pedemont has invested in a custom-built machine just for this. Usually the husk is thrown out afterwards, but she salvages hers and turns it into a tea (a tisane, to be more precise) that smells and tastes like chocolate, green tea and barley. The beans must be ground into a paste and, eventually, a viscous liquid before they can be shaped into bars. How long and exactly how to conch is a big decision for a chocolate maker, though it tends to be a two- or even three-day process. Grind longer and you get a smoother texture, but grind too long and the excess aeration will sap some of the flavour. Some chocolate makers aerate on purpose by grinding with the lid off, others age the mix in the grinder. Pedemont does neither. Her beans are so good, she takes a minimal-intervention approach.

During the grinding process, Pedemont will add what she thinks the chocolate needs, plus any extra ingredients she wants to experiment with. Dark chocolate will just have a bit of sugar added (raw, organic sugar from Bundaberg, or even the sugar refined from monk fruit juice), and the milk chocolate gets a bit of desiccated coconut (it’s ground down with the beans and used as a milk alternative). Usually cocoa butter would be added but the South Pacific beans are fatty enough. The extras might include vanilla from the tiny island nation of Niue, chilli, organic nuts, coffee beans from a local roaster, or just a little salt. 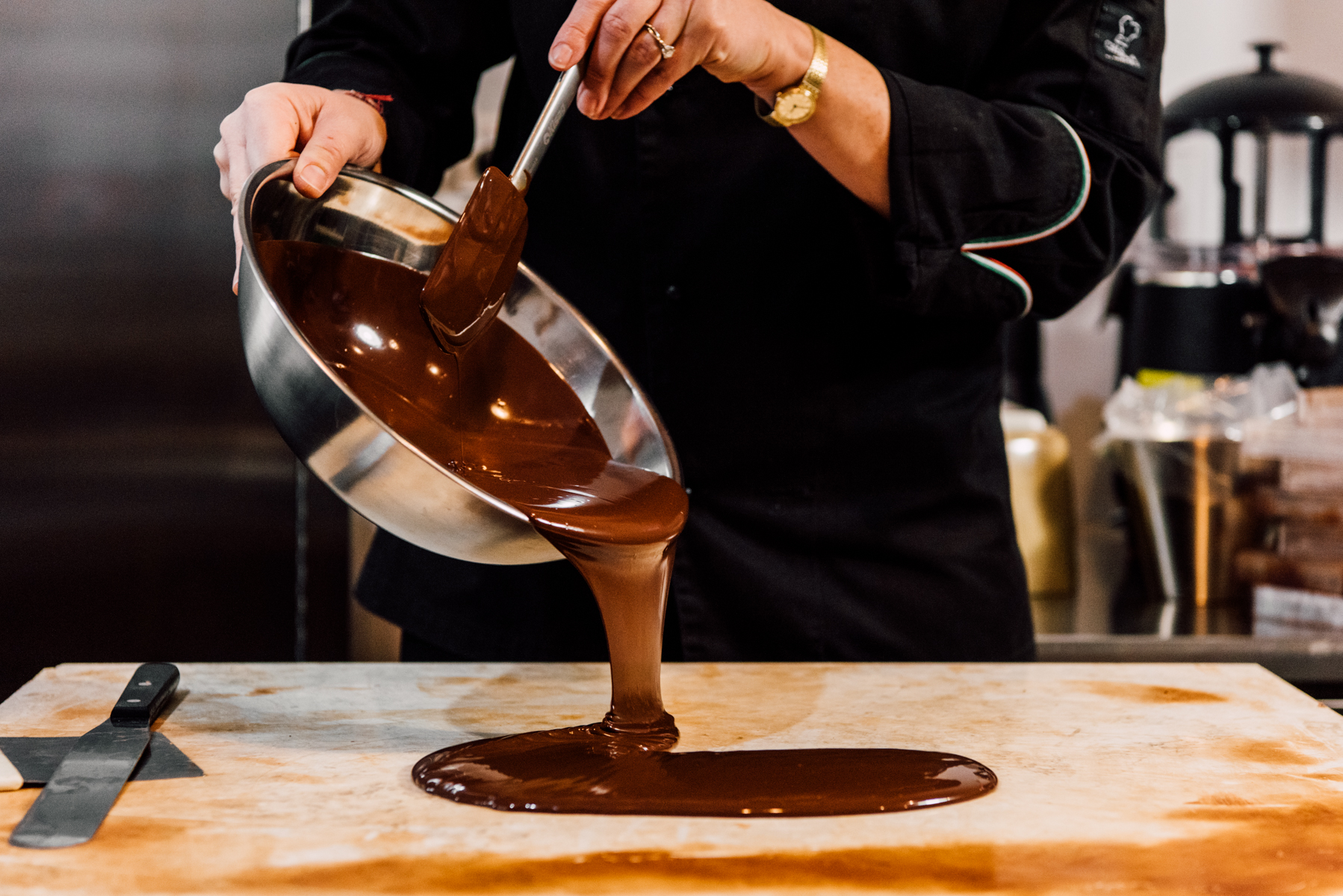 The process of turning liquid chocolate into a nice snap-able block. It’s not as simple as just cooling it down. Do that, and the final chocolate block will be crumbly and limp as a doona. Tempering ensures the cocoa-butter crystals form in an ordered way, giving the chocolate sheen and snap. The old school way is to pour the liquid chocolate onto a marble slab and slowly cool it, while folding the chocolate over itself, getting those crystals to line up and create some structural integrity. 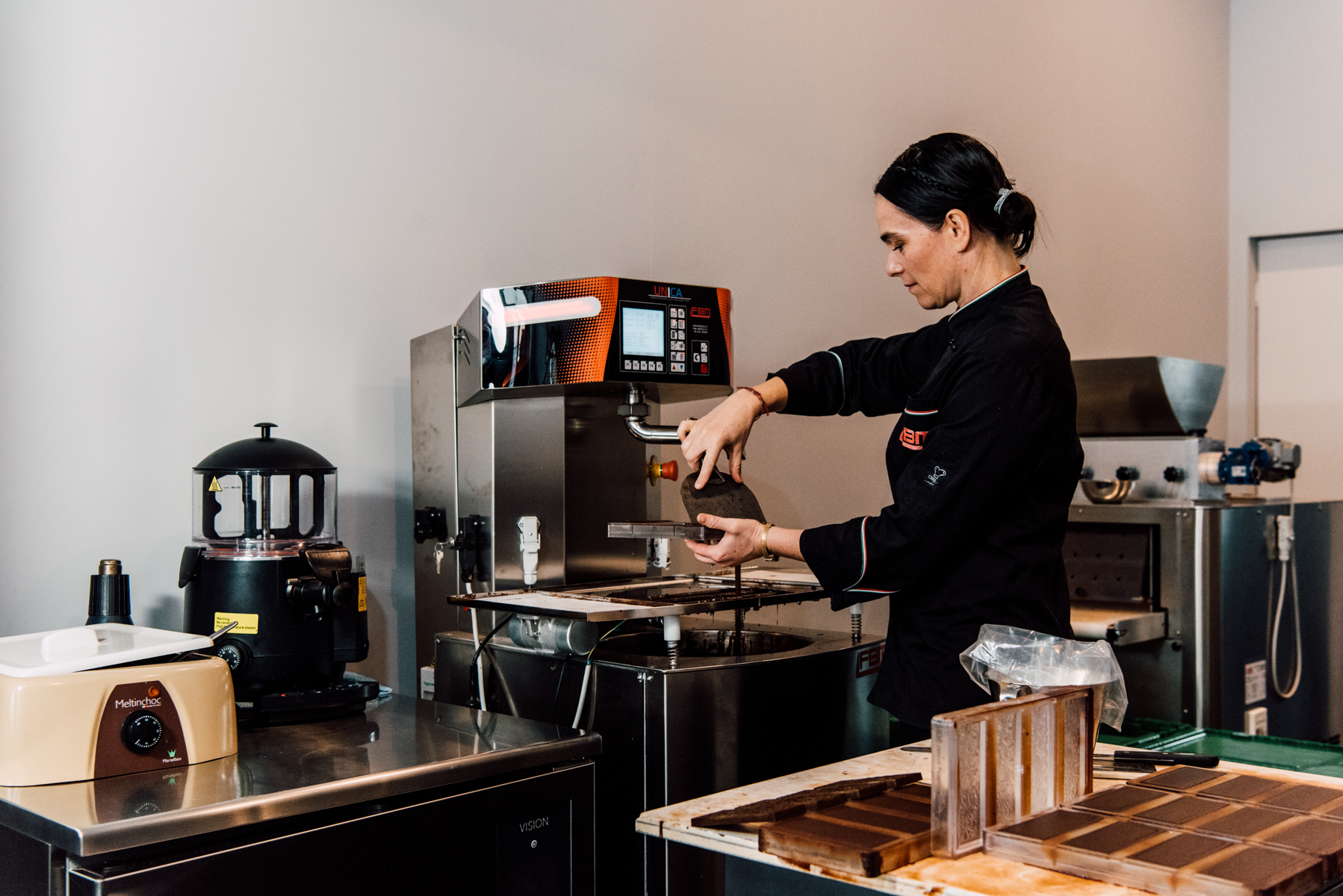 But Pedemont and most other modern makers use a machine, which is easier, quicker and more consistent. 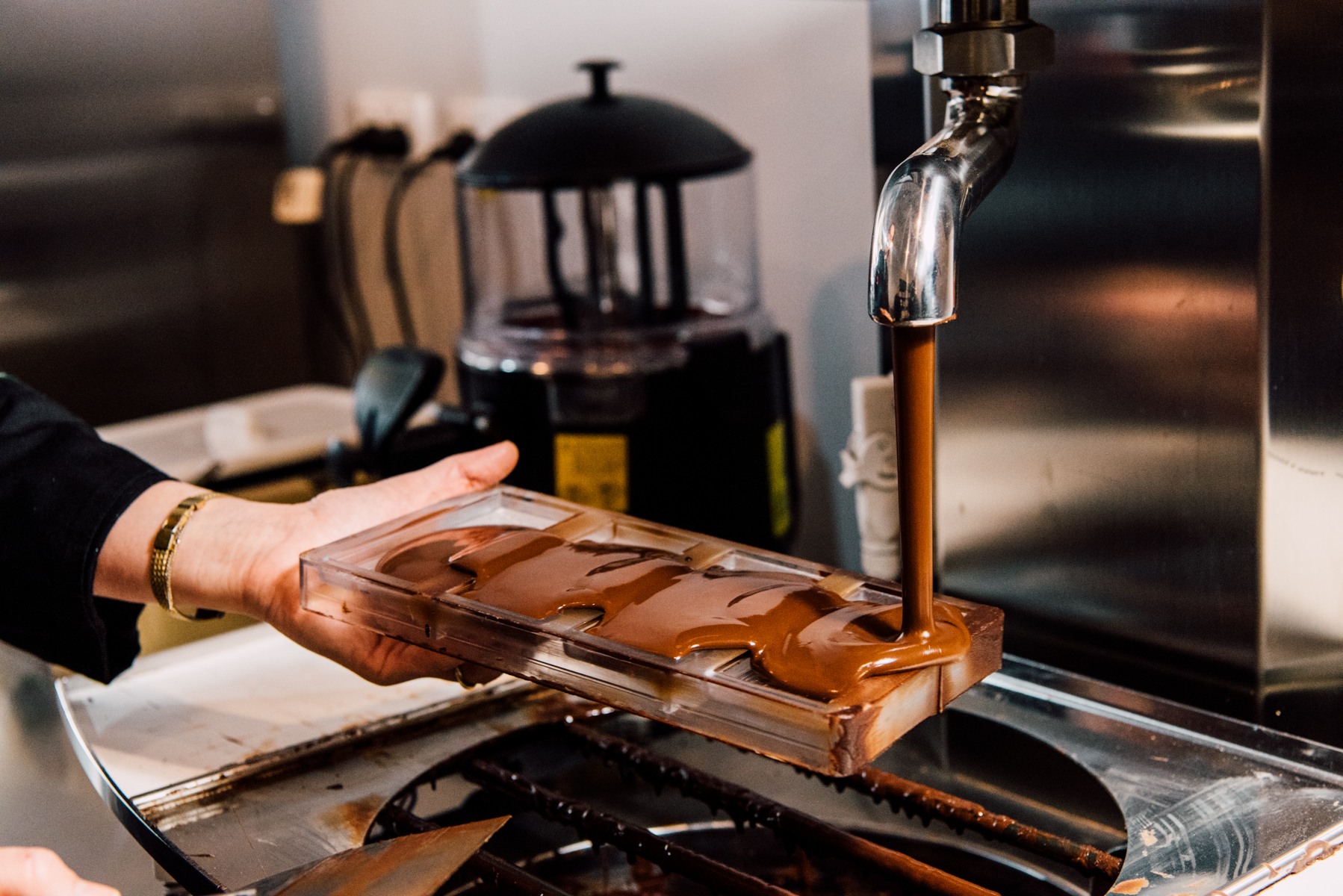 Before the tempered chocolate completely cools and hardens, it’s poured into a mould to set. South Pacific Cacao favours simple rectangles with prints on top. The range usually stretches from a coconut-y, melt-in-your-hand 50 per cent cacao product to a slightly bitter, floral and hard 100 per cent cacao. South Pacific Cacao’s stock-standard bar is the 70 to 75 per cent cacao, a slightly granular and wildly flavoursome number that tastes like the best honey there is. Chocolate Artisan, Pedemont’s second business at the same location, specialises in bon bons, cakes and custom orders.