Get nostalgic with the nachos and sticky-date pudding that put the late-night venue on the map. But Dean’s 2.0 is also of the moment, with a sophisticated wine list, spanakopita jaffles and a selection of classic cocktails with a twist. 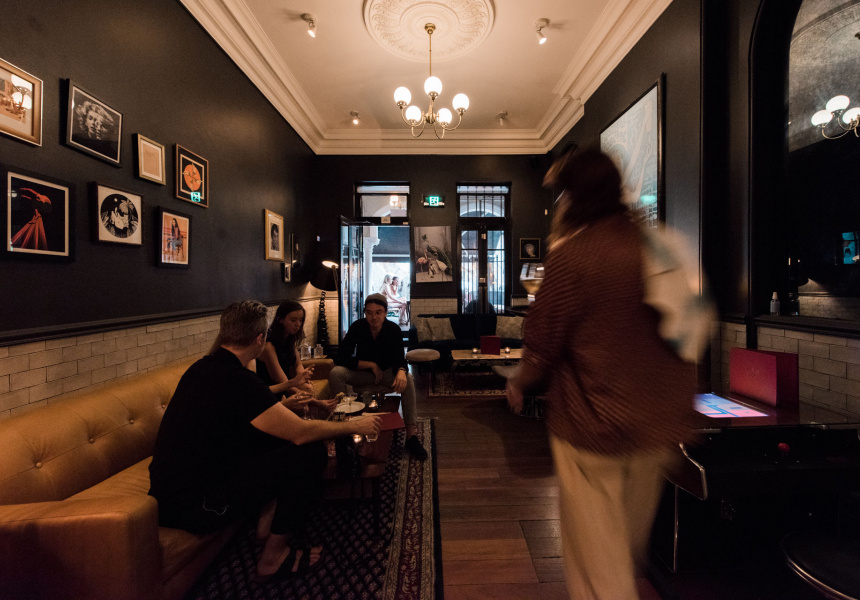 If you came of age in Sydney in the ’80s or ’90s, chances are you spent a few late nights curled up on a velour lounge at Dean’s Cafe. The doors were always open, a 20-cent coin for the jukebox would reward you with How Soon Is Now and the monstrous bowl of nachos was enough to feed big groups crowded around the small tables. Through the smoky haze you’d spot your friends knocking back the house red from water glasses. The waiter had long black hair and looked like he was in a band – too old for the Strokes, too young for the Black Crowes, but somewhere in between. He’d serve you your first taste of something you’d remember for years to come: the sticky-date pudding.

It was comfort on a plate. And now, after a year that made us crave comfort more than any other, take heart. Because Dean’s is back.

“To try and reproduce what it was is impossible,” co-owner Justin Marmot tells Broadsheet. He and his wife Louka Marmot (they also own Barangaroo’s Shirt Bar) opened (the more maturely named) Dean’s Lounge in November, right next door to the original. “Dean’s was different, the world was different, the Cross was different. We’ve made a Dean’s for 2020 – and it has the same soul.”

And while many of us feel a connection to Dean’s that borders on the possessive, for the Marmots it really is personal.

“It’s where Louka and I first met,” Justin says. “It was Mardi Gras night 2002 and my friends and I all ended up here. It was where we always ended up. I was a waiter at the original Dean’s for five years. Our bar manager Jaxon Jager (Nola, The Imperial Hotel) is actually my old boss’s little brother. I remember him coming in here when he was four years old.”

The new incarnation channels the soul of the old and is split over several different spaces. There’s the terrace, framed by an enormous fairy light-lit fig tree. The lounge is fitted out with op-shop-sourced couches, cosy armchairs, a retro arcade table (with Pacman and Donkey Kong), and a jukebox playing nostalgic tunes. A Twin Peaks-esque chessboard floor sits beneath six stylish leather booths that lead the way to the back bar, where old-world Hollywood glamour mixes with the owners’ own memorabilia.

There are personal touches everywhere, from an oversized art nouveau print belonging to the Marmots hanging above the central fireplace, to the display of crystal drinking paraphernalia in the back bar.

And while this might be a blasphemous question, we have to ask it: was the food at the OG Dean’s ever good? Sure it hit that late-night munchies spot, but was that all it was? The Marmots, along with chef Giuseppe Pappalardo (Shirt Bar) have taken the beloved classics of the Dean’s of yore and used their hospitality experience to improve them.

The results are impressive. The nachos is back, piled high with slow-cooked spicy beans, salsa fresca and topnotch guac. There are six jaffle options, including a four-cheese truffle-macaroni affair that has fromage on both the outside and the inside; a spanakopita jaffle made on puff pastry; and a “Sunday roast” jaffle with roast beef, piccalilli and an Oaxaca cheddar cheese mix.

Dessert includes five flavours of house-made ice-cream (including two vegan options); a tangy passionfruit cheesecake; and, of course, the dessert that put Dean’s on the map: the sticky-date pudding. The pressure’s on, but thankfully Dean’s 2.0 delivers. It’s both a blast from the past and a 21st-century-friendly dessert.

“It’s late-night boozy food,” Justin says. “At 2am, this is the place you want to be. We make everything we do simple, but we make sure it's awesome. It’s the place you go for a cocktail before dinner, or for late-night drinks and snacks designed to soak up the booze. If you want a coffee, we have excellent coffee. Or have more cocktails.”

The cocktail list is packed with classics with some twists. There’s a Banoffee Old Fashioned, with caramelised banana and caramel. The Brooklyn Sunset has Rittenhouse rye, strawberry shrub, vermouth and an absinthe rinse, and comes topped with a floating house-made lemon meringue.

Whisky aficionados will be impressed to see that Dean’s is one of 11 Scotch Malt Whisky Society partner bars in Australia. “If you like whisky, we’ve got a little nod to some amazing whiskies here. It’s the really good shit,” Justin says.

“The whole idea is a little bit of nostalgia. Step back in time to how things used to be.”