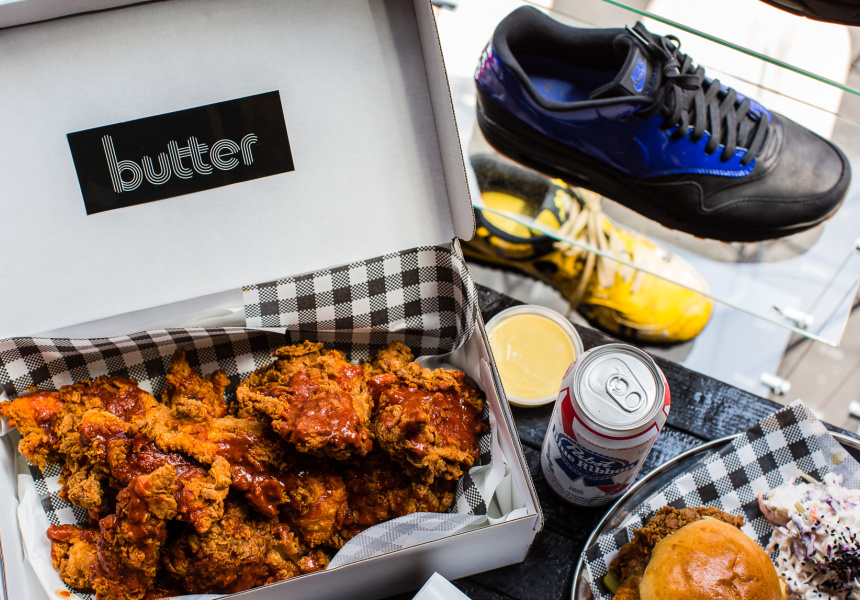 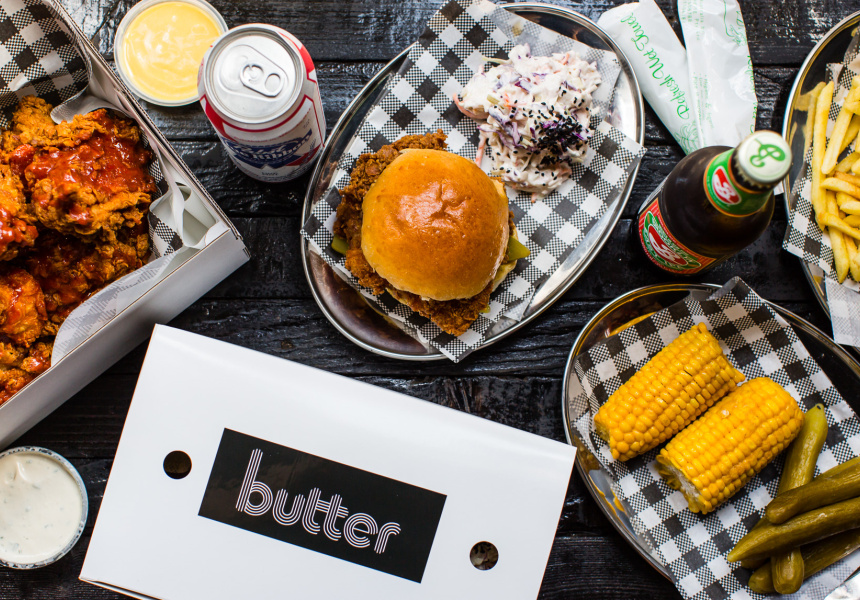 What is Butter? The outside looks like any fancier-than-average sneaker store, but then there’s two bottles of Dom Pérignon in the window. After a double take you see, through the tinted glass and sneaker shelves, fried chicken, soft serves and sparkling wine. It’s not a sneaker store, a restaurant or a bar. It’s something entirely new and different.

“It's just everything we love,” says Julian Cincotta, formerly of Rockpool and Nomad. The rest of the “we” is Mo Moubayed and Paul Flynn from Thievery, in Glebe. The trio’s new project could easily sound gimmicky or like the tipping point of trend culture, except that everything is taken so seriously.

The sneakers in the front window aren’t the same new-release Adidas and Nikes you can buy in Hype; they’re collectible, and you’ll need to organise an appointment just to buy them. “The sneaker heads will know,” says Cincotta.

The chicken is just as serious. It’s brined, heavily battered and, as a result, crunchy and juicy. It’s half drizzled in hot sauce, like a stylised blend of the drier American style and sticky Korean fried chicken. “It's a bit like hip-hop, it's a bit of everything,” Cincotta says. It comes in a sneaker-labelled shoebox, or in an unashamedly buttery, disproportionately chicken-heavy sandwich.

The rest of the menu can be summarised as the chicken entourage: chips, corn, whole pickles, slaw, tofu nuggets and soft serve. The chips are a particular marvel; they’re packing umami flavour from a fermented mushroom salt Cincotta has created. “It’s like natural MSG,” he jokes. Alongside champagne on the drinks list – mostly high-end – there is a rotation of boozy slushies and a few foreign beers, including US hipster favourite, Blue Ribbon.

Eating here – boxed in between a bar pumping out slushies and soft serves, and a frontage advertising itself as a sneaker-nerd hang out – will probably feel exciting and cliquey; like you’ve walked into an exclusive club and no one’s noticed you’re not a member.