A late-night conceptual cocktail bar and modern Chinese eatery opens in the CBD. 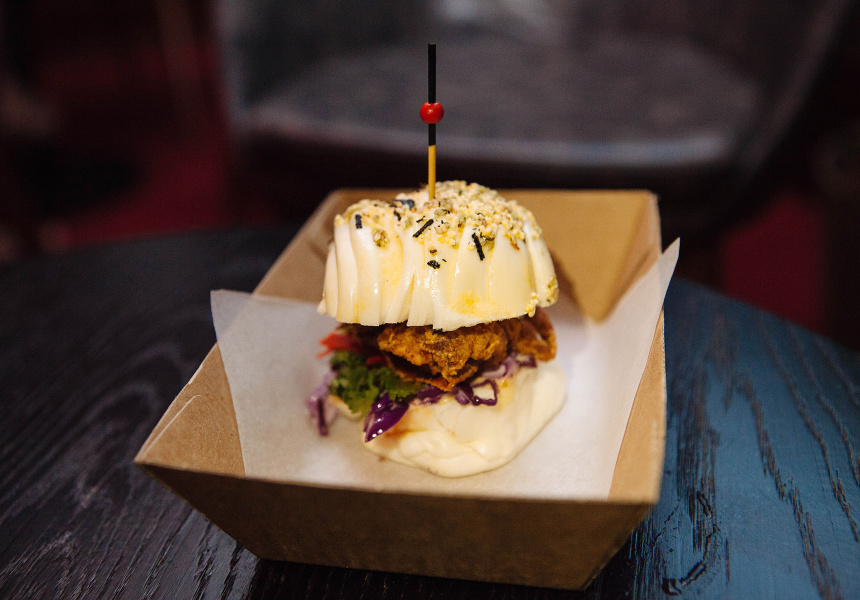 Two flights of stairs above the Carrington Hotel on Park Street lies what at first glance looks like a tribute to 1970s suburban Chinese dining. Faded carpets are laid beneath kitsch red and gold dining chairs, while waiters with plates of prawn toast, dumplings and duck spring rolls traverse the space.

But there are subtle hints that this venue is not all it seems. Behind the bar, bartenders in dapper dress (including Geoff Owens of Tonic Lounge and Manta Restaurant, and Clement Martin of The Victoria Room) whip up modern concoctions from the selection of more than 400 spirits on offer.

There’s the Dunkin Doughnut Martini, a mix of dark rum, bourbon, vanilla and doughnut syrup, topped with half a Krispy Kreme. Or the Hot Smokin’ Mexican Jerk, a spicy mix of smoked silver tequila, chipotle, adobo, agave and ginger, garnished with fresh lime, bacon and beef jerky. Those who prefer a simple twist on the classics might go for a hickory-smoked Whiskey Sour, or the Old & Spiced, made with aged spiced rum, Chinese five spice, house-made ginger beer and candied ginger.

The food menu was designed by chefs Roy Ner (Aria, The Owl House) and Danny Russo (Star Bar, L’Unico, Lo Studio, The Beresford, The Old Library et al.) and borrows inspiration from the local takeaway shops of so many Australian childhoods and thrusts them into the 21st century. Think modern, beautifully presented bar food tailored to a relaxed, shared-dining environment.

As a final touch, in place of the traditional fish tank, diners will find an eerily glowing jellyfish tank, complete with customisable weather patterns, the only one of its kind in the country.