Acme co-founder and pasta whiz Mitch Orr brings his pig’s head macaroni back to the masses; a former Queen Chow chef is infusing chilli oils; and the Old Fitz’s ex-head chef is giving Sydneysiders a taste for eel. 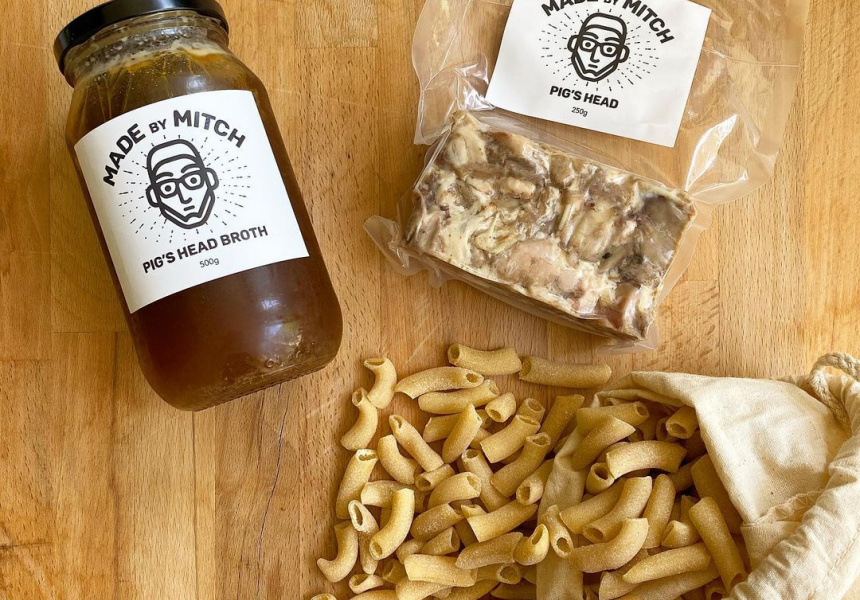 With the hospitality industry brought to the brink by the pandemic, 2020 was a tough year for restaurant workers. But though it was filled with uncertainty, disappointment, hardship and fear, it also provided enterprising chefs with an opportunity to direct some of their culinary energy away from the restaurant and into a range of products designed for our home kitchens.

These three chefs have become part of a movement endeavouring to fill our cupboards and fridges with the kinds of ingredients we could once only find in our favourite restaurants. From smoked eels to XO sauce and pasta kits, it’s a (tasty) silver lining to a rough year.

Nicholas Hill – Smoketrap Eels
Prior to lockdown, ex-Old Fitz head chef Nicholas Hill – who says he was “gutted” to see the Woolloomooloo pub close just as he and his team were settling into their Brit-pub-fare groove – had been trying to source smoked eels to use on his menu. He decided to take matters (and eels) into his own hands and produce the smoked fish himself. But his Hawkesbury River eel supplier’s minimum-order size was far beyond what he could use in the kitchen.

“We couldn’t just get the two kilograms of eel a week we needed,” Hill tells Broadsheet, “so we decided to get 40 kilograms and see how we went. When Covid hit, we thought we should look at going retail.”

Enter Smoketrap Eels. The eels are purged to clear any muddy impurities; brined in a mix of salt, treacle and water; then smoked for 10 hours over hickory. They’ve slithered their way into restaurants including Cafe Paci, and often appear on Hill’s menu at his Milan Cricket Club pop-up at La Rosa in The Strand Arcade.

Home diners, too, can enjoy the premium eels in the form of a smoked-eel pate, which is available from Fish Butchery, LP’s Quality Meats, Fabbrica and Continental Deli. The hand-picked meat is mixed with horseradish and olive oil, then sealed with smoked, clarified butter.

“Get your hot toast, spread on a little smoked butter, then top it with the eel. It’s the best,” he says.

Hill has also recently introduced an eel-infused dashi vinegar to the range. More Smoketrap products are in the works, including katsuobushi-esque sheets of puréed, dried and smoked eel skins, bones, heads and tails – cleverly named Eel Grey Tea – which can be used as a base for stocks and soups.

Spending days at home looking after his newborn son, Friesen kept his hands occupied making dumplings for the family, but discovered he was missing an important condiment.

“I wanted that chilli oil that you get at Szechuan restaurants,” Friesen tells Broadsheet. “That really roasted, really rounded-flavour chilli oil to dip your dumplings in. Nobody could go anywhere, and we were at home with the baby anyway, so I just started making it.”

After giving a few jars away to appreciative friends, he adopted the Kowloon Chilli Co moniker (a nod to the district in Hong Kong), and set about producing a sizeable batch of both the chilli oil and the XO sauce he’d perfected during his time at Queen Chow and Ms G’s.

“Unlike a lot of commercially made XO sauces, this one isn’t full of fried shallots and filler – it’s packed full of the good stuff. Lots of dried scallops and dried prawns,” says Friesen.

Currently available in stores including Season’s Fruit Market, Thai Kee IGA and Manetta Seafoods in Pyrmont (“it works well in seafood shops because you can buy your pippis and then buy a jar of XO sauce”), the products have also appeared as pop-up menu items at diners including Butter and JB & Sons. Friesen recently added his favourite dumpling sauce – a mix of chilli oil, vinegar and soy sauce – to the range.

He hopes to expand his range of stockists, but concedes that his new role as a father has made selling chilli oil a lower priority.

“[The baby] has been doing sleep training the last two weeks. I know I need to start selling a bit more, but I’m a little bit vulnerable right now if I’m honest.”

Mitch Orr – Made By Mitch
Mitch Orr has continued pumping out pasta since he closed popular diner Acme in 2019 – he was the founding chef at Maurice Terzini’s Cicciabella, he’s been leading Pilu’s Baretto Nights wine bar this summer, and he supplied shipments of pasta to Josh Niland for his Fish Butchery At Home takeaway meals during lockdown. But there’s something Sydney hasn’t stopped begging him for: that famous pig’s head macaroni.

A rich, glossy combination of master-stock-braised pig’s head meat and al dente handmade pasta, all crowned with an egg yolk, the dish became a signature of Orr’s Italian-ish pan-Asian-ish fare, and represented the kind of playful but relentlessly delicious food Acme was known for.

Now that dish, along with the black garlic and burnt-chilli paste he served with linguini in Acme’s heyday, are back as part of Made By Mitch, a series of meal packs crafted by Orr for nostalgic diners to cook and enjoy at home.

“I wanted to do a couple of things that are pretty unique to me and relatively easy to produce,” Orr tells Broadsheet. “I settled on the black garlic and burnt-chilli paste and the macaroni pack as they’re still what everyone asks me about. Believe it or not, I still like cooking and eating those things too.”

The first round, promoted via Orr’s Instagram, sold out in moments, and he’s subsequently launched new releases (including a shiitake XO).

“I've had such an amazing response that I’ve actually more than sold out,” Orr says. “So I need to catch up on making things for everyone [who has] already emailed, and after that I’ll probably do another release.”

Find out about new releases here.