Gardener turned American barbeque cook, Tim Odom started Smokey’s O’s as an underground food pop-up, hosting unofficial barbeques down at local parks. We visit him out at Parramatta one smoky afternoon and sit down to chat barbeque. 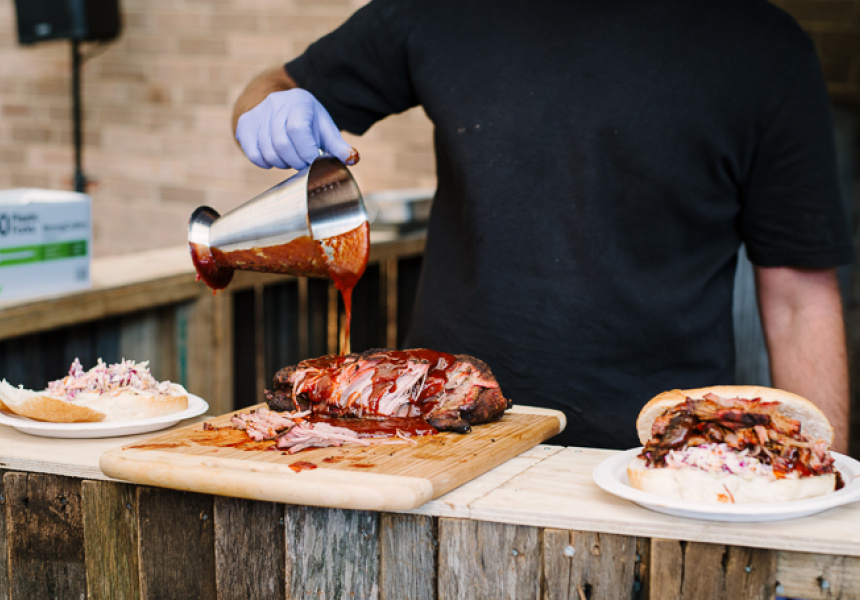 Cooking meat outdoors has long been one of our favourite pastimes, and we've developed our own tried-and-tested practices when it comes to barbeque. And we're not the only ones. Through our explorations of American barbeque with Bulleit Bourbon, we’ve been lucky enough to stumble across some pioneers of this low and slow style of cooking meat outdoors in Australia.

In the Deep South of America, they're equally passionate about searing meat in the open air as us Aussies. And now with the advent of Smokey O's – a pop-up caterer based in Sydney's west – we’re really beginning to find out what this Southern American barbeque is all about.

The man behind Smokey O's is Tim Odom. His interest in American barbeque stems from his grandfather, a native of the Florida/Alabama border area, who was famous for his legendary cookouts. “He was larger than life, a true Southern gentleman, and he loved large gatherings of family and friends,” says Odom. After moving to New Zealand (where Odom grew up), his grandfather continued to barbeque, and it was from these cookouts that Odom caught the bug for Southern cooking.

“It's become a bit of an obsession for me,” Odom says. He previously made a living as a gardener and now describes himself as a dad, husband and cook - and a very serious American barbeque enthusiast to boot. He talks passionately about the subject, animatedly describing spending hours and hours trying to get his flavours and techniques just right.

Odom is also a keen student of the long history of Southern cooking. “Barbeque in America has its roots among poor people, which means the equipment and things you need to make it are simple and the practices are simple. But it still requires hours of practice to get it right,” Odom explains.

Smokey O's started out as an underground pop-up, where Odom would take his gear to a local park and host unofficial barbeques. He'd ask for donations instead of charging customers to get around the fact that he was unlicensed by local authorities. He's now invited to cook at farmers' markets, festivals, cafes and restaurants. On the day we caught up with Odom he was prepping for the Parramatta Lanes festival, which sees the backstreets of Sydney's second CBD playing host to food trucks, pop-up bars and art exhibitions.

Smokey O's signature dish is pulled pork. “Pulled pork is everywhere these days,” says Odom, “but not many people are doing it well.” Odom uses Byron Bay Berkshire pork which is rubbed down with his own blend of salt, paprika, chilli, cumin and sugar. The pork is then smoked over red gum chips for 12 hours, until it can be gently pried apart. He adds a smear of fiery homemade barbeque sauce and then serves chunks of the pork on a roll with homemade slaw.

Another popular dish is Texan-style smoked beef brisket - made by cooking Cape Grim beef at low temperatures for about 14 hours until the exterior of the meat is blackened, and the meat inside is tender and moist. Smokey O's also does a good trade in baby beef back ribs which are glazed in a sticky, sweet barbeque sauce. At markets, Odom also sells his own apple-smoked bacon, which is dry cured with salt, pepper, garlic and maple syrup for two weeks, before it is hot smoked with apple wood and hand-cut into thick slices.

Odom will soon be launching the Smokey O's food truck. A 1975 Dodge truck is currently being fitted out and should be hitting the streets by November. In the meantime, there will be more appearances at farmers' markets and festivals around the city, as well as some special events to celebrate Thanksgiving at the end of November.

Broadsheet and Bulleit Bourbon have partnered to explore the underground culture of American BBQ together over the next few months. Smokey O’s will be working with us to cook barbeque at some events during this partnership. The first one is coming up this week, stay tuned.