By the team who founded Betty’s Burgers, it’s offering a bargain meal without compromising on quality: fries are hand-cut, and ice-cream for milkshakes and sundaes is churned on-site each day. 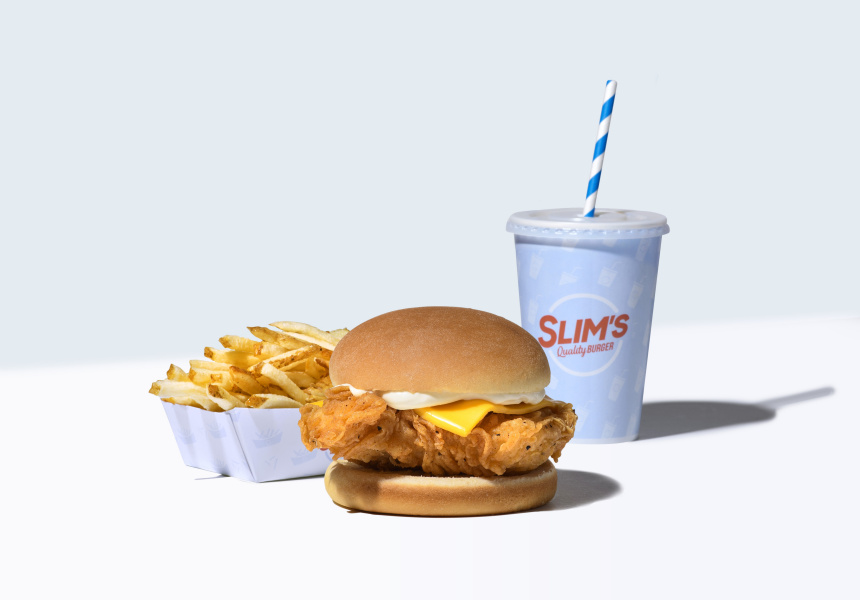 Slim’s Quality Burger is an appropriate name for a venue that’s straight to the point with its purpose: to serve affordable and simple burgers that are also delicious.

The Marrickville eatery is inspired by ’50s and ’60s American diner-style joints, and comes from a trio that knows burgers: Betty’s Burgers founders Nik Rollison, Michael Tripp, and David Hales (they’re no longer involved in Betty’s).

The main difference between Slim’s and other burger eateries, which you’ll immediately notice, is the price. Roll up to Marrickville Metro and order any of the 11 burgers on the menu board without spending more than $10. In Sydney nowadays that’s almost unheard of – unless you’re settling for Macca’s or the Colonel.

“With Betty’s, we could reach most people. With Slim’s, we can reach everyone,” Rollison, a southern California native who grew up around iconic American chain In-N-Out Burger, tells Broadsheet. “That’s the biggest difference.”

A classic cheeseburger with an Angus beef patty, grilled onion, cheese and ketchup on a potato bun will only set you back $6.50. The most expensive burger, “the works”, with beef, grilled onion, maple-smoked bacon, cheese, lettuce, tomato, pickles and special “drive-in sauce” is just $9.50. Extras such as jalapenos or beetroot are 50 cents, and an extra patty is $2.50.

Between buns you’ll also find grilled chicken and cheese; a plant-based patty with vegan garlic mayo; and fried chicken with smoked bacon, tomatoes and lettuce. Just don’t go confusing low-cost with taking shortcuts. Potatoes are hand-cut into fries, and ice-cream is churned on-site each day for sundaes and milkshakes.

Sydney’s burger scene has evolved over the last decade. And although we’ve adopted plenty of American influence, many eateries have veered from the classic smash cheeseburger into serving skyscrapers held together by skewers.

Slim’s is looking to press rewind on that trend. “We think keeping it simple is the only formula and, frankly, you can’t reinvent the wheel,” Rollison says.

“I mean, it’s meat between bread, and if you’re trying to evolve it to a fish deck with a beef stack, with chicken, Nutella, and doughnuts – it’s not a hamburger anymore.”

The Marrickville eatery – with its diner-style counter, bright red banquette seating, outdoor courtyard and open kitchen – is the first of what will eventually be many locations around the country. There are already two other Sydney venues under construction, and the five Queensland stores under development will each be built as drive-ins.

“We’re bringing an old school drive-in style experience where you pull up to the front in your car, order and pay from your car, someone brings it to you, then eat and go at your convenience,” Rollison says – think the drive-in diners of classic American high-school films Dazed and Confused and American Graffiti.

Slim’s Marrickville might not do roller-skate service, but convenience and a sense of nostalgia will definitely be there. We’re just jealous Sydney isn’t getting drive-ins – yet.