Simplicity is key at Dumplings & Beer, a tiny new venue that recently opened very discretely in the backstreets of Potts Point. The venue seats just 25, with only 14 items on the food menu, which is shorter than the beer list.

“The space is small, so in the kitchen we can have only one chef,” says co-owner Alex Ly. “We keep everything very simple, with a focus on freshness.”

“We try to steam or very lightly stir fry most of our dishes,” says Ly. “We want to promote healthy, home-style eating.” Ly opened Dumplings & Beer with his sister, Rose, after managing restaurants and working as a wine supplier in Europe and Asia. “Rose had a brainwave. She said, ‘Why don’t we just do something like dumplings with beer?’” says Ly. “It made sense. So we designed a neighbourhood bar where you can relax and stay late into the night mixed with the more traditional dining options of a Chinese tearoom.”

While a liquor licence is pending, there are several varieties of tea on offer, and it wouldn’t be a Chinese cuisine if you couldn’t order a can of Sunkist. Ly plans to start serving his extensive beer list within a couple of weeks. “Aussies love their craft beer, it’s all part of having a relaxing evening.” He says. There’ll be around 20 beers on offer, all selected to complement the flavour profile of the food, from Monteith’s Black Beer to Schöfferhofer longnecks. Dessert offerings are also in the works. 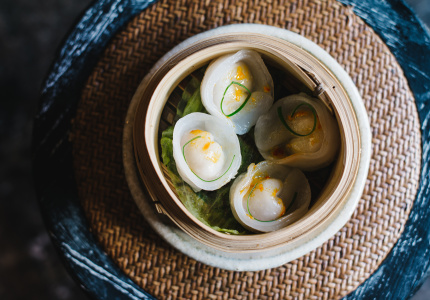