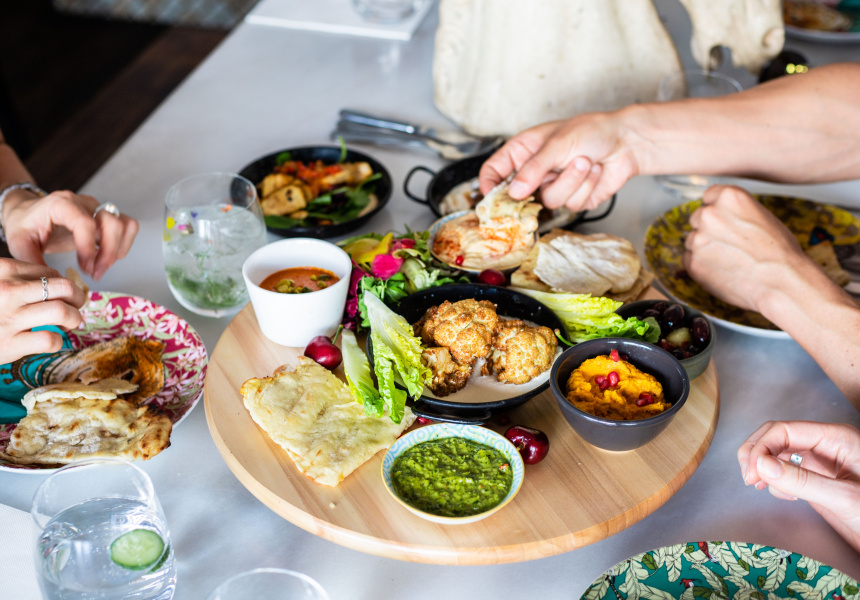 The first thing you notice when you take a seat for lunch at the lovely, light-filled Sefa Kitchen is the tables are now covered with newspaper.

“The idea is we serve a large sharing platter of food and you use your hands to wrap it up in bread and if it drips, that’s okay, it can go on the newspaper. At the end we roll it up and take it away; that’s how it’s done in Egypt,” says Utku Ayhan, the owner of the bustling Bondi Road diner.

Now on weekends it’s serving Egyptian lunches – a spread that includes fluffy house-made lafah (flatbread you find in the Middle East), and a selection of bowls that can include a mix of slow-cooked lamb, fish, spiced chicken or Israeli salad. There are also North African dips, clove-spiced house-made pickles and other produce from Sefa’s garden out the back.

Juice will inevitably burst out of your savoury bread package and run down your wrist. You can request a plate if you prefer, and cutlery is also optional, but Ayhan is hoping people just tuck in with their hands and use plenty of napkins to mop up the delicious mess.

Sefa is a Bondi mainstay, and serves food from the Levant – an ancient region that includes parts of the Middle East, such as Jordan, Lebanon, Israel, Palestine, Syria, Cyprus and the south-east corner of Turkey.

The idea to introduce the Egyptian lunches came after the restaurant got a new chef. Mohamed Kharboush hails from Egypt and has worked in a couple of Sydney hotels such as the Marriot and the Hyatt, and before that Balmain’s Kazbah, and places in Cairo. He says the lunches in that city always bring people together, no matter their backgrounds, and that’s what Sefa hopes these will do too.

There are some easy-drinking cocktails to match the lunch – the Egyptian Hibiscus Spritz (hibiscus tea, vodka, ginger, prosecco) and the Musky Istanbul (house-made limonata, mescal and mint) – and there are desserts of deconstructed baklava with rose jelly, or rhubarb made three ways and served with halva cream (the Turkish equivalent of crème brûlée).

Sefa Kitchen’s Egyptian lunches launch on Saturday December 8 and are available every weekend.