The Secret is in the Stock at Bar Pho

We stop by Bondi Farmers’ Markets to ask Tina Do about the secret to perfect pho. 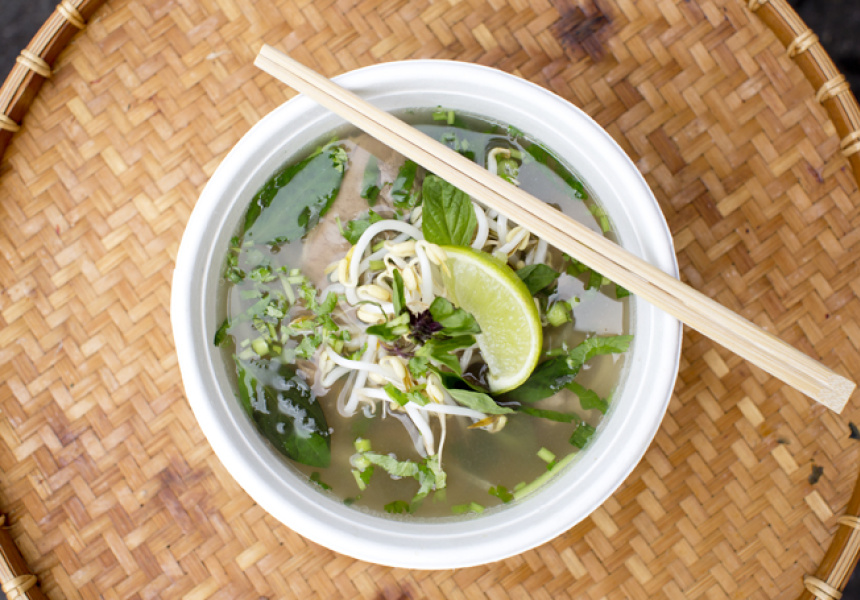 “It’s the clarity of the stock that’s really important,” says Tina Do, the culinary force behind the Bar Pho stall that you’ll find each weekend at Bondi Farmers’ Markets. “There are two different types of pho stock, from the north and south of Vietnam. My mum is northern and my dad is southern, so I mix it, but in the end it’s mum’s recipe. You really need to clean the bones and the bones are the key to a good stock.”

Do is explaining the secrets of perfect pho on a Saturday at the markets as regulars and friends – all fans of her lovingly prepared Vietnamese soup made from a stock that has been simmered for 14 hours – perch on tiny stools around the little Bar Pho tent. [fold]

“You also have to make sure that the spices are balanced. But it’s the clarity of the stock and the bones that give you the flavour.”

Do is passionate about her favourite national dish and her enthusiasm spills out into cheerful greetings. She’s happy to answer questions and explain exactly what goes into the dish, as well as the best way to put it all together. There’s a box of spices sitting on the counter with deep pockets of cassia bark, star anise and cloves, and their beguiling perfume mingles with the smell of spiced broth and fresh coriander.

She picks up a fat, fibrous pod and peels back the layers to uncover the dark seeds tucked within. “It’s black cardamom from Southeast Asia,” she says. “When you grind it up, all the little seeds come out of the pods.”

The counter comprises a giant portable stockpot (inspiration from a recent trip to Vietnam) and trays of mouth-watering additions to complete a bowl of pho. “We blanch the rice noodles in the stock pot and there are two types of meat that go in: fillet beef, thinly sliced, which cooks when the broth is poured on, and brisket. I cook the brisket in the stock, so all the flavour gets right into the meat. It just melts in your mouth.”

Do, who was born in C?n Th? on the Mekong Delta of Vietnam, before arriving in Australia as a refugee at the age of one and growing up in Cabramatta, believes that it's pho’s potential for variation and interpretation that is winning people’s hearts. With a vibrant selection of dressings that include fresh lime, bean shoots, basil, extra fish sauce and some hoisin for sweetness, you’re not quite done until you’ve finished with a flourish of chilli sauce. “I call it the pot of gold,” laughs Do, pointing to the fat jar of fire-engine red chilli oil on the counter, made by her mum and so popular that Do is now selling it in little pots.

“Some people like to really drown it in chilli and some people make little pictures with the sauce,” she says with a big grin. “I think the personalisation is one of the things people love most about pho. We love to play with our food.”

Bar Pho has only been up and running since March, but its creation was a long time in the making and included trips back to her birthplace in Vietnam since she originally left in 1980. “Mum taught me how to cook at the age of 11…she taught me all her recipes...I remember my hands always smelled of garlic,” she laughs.

Do has recently partnered up with Alma Beef (Wellington, NSW) in support of a paddock-to-plate (or paddock-to-bowl) philosophy and she has plans to set up at other markets around Sydney.

But for now, she’s just happy to be spreading the love by feeding the people. “We even have pho families!” she says. “Mum, dad and the kids all come and have pho together! It’s such a lovely atmosphere.”