Seafood as it should be at Flanagans Dining Room

Situated 10 minutes from Wollongong, the seaside town of Thirroul is home to a restaurant touting local, fresh and elegantly handled seafood and produce, right on the sand. 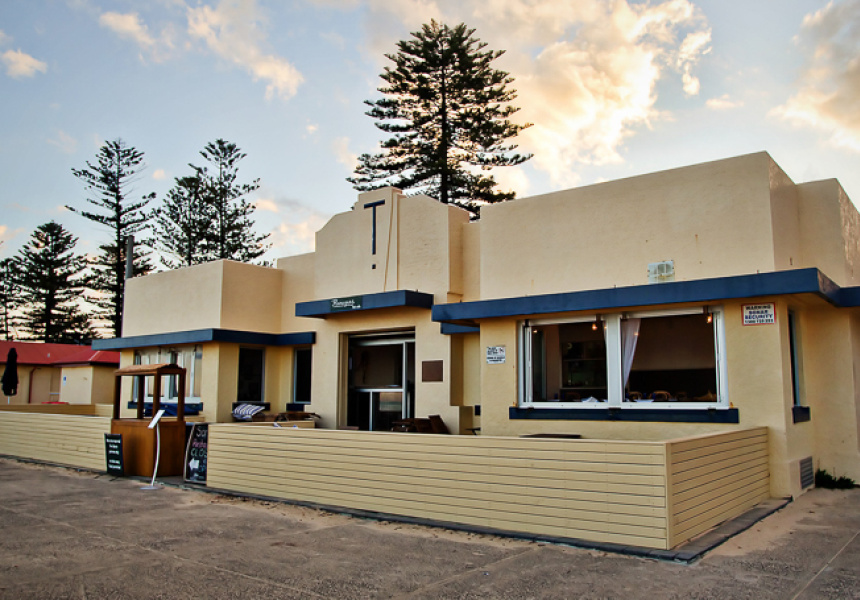 It’s hard to ignore the spectacular view of waves breaking on Thirroul beach; but at Flanagans Dining it’s more difficult to tear yourself away from the food.[fold]

Just over an hour from Sydney, a swift turn off the M1 before reaching the thick of Wollongong will see you in Thirroul. If you have a little more time, however, indulge in a drive down the densely forested road through the Royal National Park, which twists and turns along the cliff face.

The restaurant’s previous incarnation was a no-frills fish and chipper, despite its striking 1940s art-deco style building. But in the last year, Flanagans has stepped things up. Thirroul local John Connolly has partnered with ex-Efendy chef Arman Uz to rejig the space, committing to a menu of locally caught seafood, previously unavailable (or ignored) in the area. “Some people, they don’t know what to do when they’re served a whole fish for lunch,” says chef Uz, who’s sipping tea at a table overlooking the white stretch of beach. “For a while, they just wanted ordinary battered fish and chips, salmon or steak; they didn’t really understand what we were doing here.”

Just over a year down the track, the restaurant is spilling with locals and visitors from the big smoke. The menu, which changes weekly, incorporates hints of Turkish influence thanks to Uz’s background. While delicately plated, the food’s relaxed during the day, and transforms into a seven-course degustation on Saturday nights.

A Pigs Fly cider or Pale Ale from Bowral, or even a chardonnay of the same region makes a neat match to a dish of whole-fried salt and pepper rock cod, the flesh succulent beneath a crisp shell.

Plump scallops come pan-seared atop dabs of ruby-red chilli sambal and a scattering of micro herbs, grown in the gardens of Uz and Connolly. Monkfish, a monstrous-looking thing in the wild and an oft-overlooked fish in kitchens, arrives at the table moulded into spiced and herby kofte, and also as a pan-roasted fillet with fried florets of cauliflower and spoonfuls of citrusy gremolata.

Uz’s Turkish background also rears its head on the dessert menu, where a dusting of sumac can be seen over creamy, piped white chocolate, strawberries, dried and powdered coconut and raspberry pearls. Each dish is dazzlingly rich in colour, micro herbs, edible flowers and greens that are used wisely. A diligence and delicacy with plating is an evident passion for the chefs here, elevating the experience to one that easily matches a much bigger kitchen in the city. The inclusion of a take-away kiosk to the side of the building keeps the sand-dwellers fed and happy, and maintains a close connection to the humble roots of this place. If that view doesn’t cap things off, maybe a post-lunch swim will, but we’re willing to bet you’ll be back soon.