Sydney’s first raw-food cafe has since grown into a small empire. Sadhana Kitchen, an organic-wholefoods and raw-food cafe, has expanded slowly. It opened in 2012 in a shared space in a Newtown yoga studio, then it moved to Enmore. Now it has set up a second cafe in Bondi.

It took two years to find the ideal beachside spot. The one the team found used to be a Thai restaurant. Founder Maz Valcorza has kept the space’s existing exposed brick. Every light hangs off the end of a copper pipe, as though the plumbing’s been pulled straight out from the walls. It seats 60 and can now offer a dinner service.

The plant-based, ethically sourced fare, sprinkled with the latest “superfoods” (activated grains, nuts and seeds), has attracted a strong following.

Everything is prepared at temperatures below 40 degrees Celsius. “We wanted the least amount of refinement to our ingredients, as long as it’s still hearty, familiar and indulgent,” says Valcorza.

Choose from a selection of nutrient-dense smoothies such as The Warrior with berries, banana, chia seeds and sprouted-brown-rice powder. There are also breakfast bowls of cacao nibs and a popular Cheezeburger, a vegetarian patty topped with homemade vegan cheddar.

“I don’t want people to feel like they’re just going out for a salad,” says Valcorza. “When people leave here, they’re going to feel full.”

The cafe plans to serve pulled-jackfruit tacos and barbecue fries topped with mesquite powder – a sweet Central American superfood made from the ground seeds of the mesquite plant.

Sadhana Kitchen also intends to serve organic picnic hampers it calls “Bondi baskets”. Customers will be able to order them online, pick them up and take them to the beach. 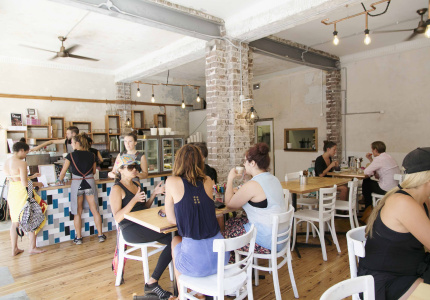