Try dishes from Hubert, LuMi, Stanbuli, The Dolphin Hotel, Salaryman and the Continental Deli at the Broadsheet Restaurant. We’ve spent the past year scouring Sydney for the restaurants and dishes that best represent our city: what’s new, what’s great and what we love. Last month it all came together at Broadsheet Restaurant. It's almost over - this is the last week, and we're going out with a bang with a European feast on Sunday.

From Hubert, we’ve borrowed the dashi-based clams Normande. It’s an example of what it and Sydney does best: classic – almost nostalgic – European food mixed with a subtle expression of East Asian techniques and ingredients. It’s simple and intensely rich, so we recommend sharing it, or pairing with a textural salad of pickled octopus strands, crunchy celeriac, black-eyed peas and a sprinkle of dried chilli from Stanbuli. And Nomad’s spice-encrusted barbequed spatchcock. It’s incredibly juicy and has a powerful flavour but is served with chermoula yoghurt to balance the punch.

If you’re heading in solo, look for the Dolphin’s classic Italian-sea-side dish of spaghetti Puttanesca or The Unicorn's cheesy eggplant parmigiana which comes with a dusting of crunchy bread crumbs. For pre- or post-dinner snacking we’ve sourced a very local option; a charcuterie board by Mercado’s do-everything-yourself butcher-chef-cheesemaker Nathan Sasi. We’re also trying a transitional dinner-to-dessert snack with LuMi’s mini meringue with straciatella, honey and rosemary powder. Use it to get your tastebuds primed for one of the softest, creamiest cakes in Sydney – Fratelli Paradiso’s tiramisu.

That’s just the dinner menu (well, some of it). The morning options move between some of Sydney’s more experimental ideas to comforting, familiar meals. On one end of the scale there’s a campfire-style cheese toastie from Mary’s, and from The Boathouse, a hefty toast stack with bacon, avocado, Persian feta and tomato. On the other end there’s a genre-bending salad from Venus Wholefoods with lettuce, mango, pickled jalapenos, broad beans, black sesame and maple. For somewhere between, shoot for PCP’s scotch-egg-like crumbed egg with kale and rich mustard-braised ham hock. Or Edition Coffee Roaster’s dense pumpernickel smørrebrød with custom smoked salmon (he only makes it for three venues in Sydney), salmon roe and crème fraiche.

Whether you’re looking for a breakfast or dinner date we’re still sticking with the same guns that fired the first drinks menu: cocktails from the master mixologists at Bulletin Place, coffee from Mecca and a wine list from Nomad’s Samantha Payne.

To try the rest of menu (with dishes from Kensington Street Social, Porteno, Master and Dead Ringer book here). You have three more days to try it. The best option 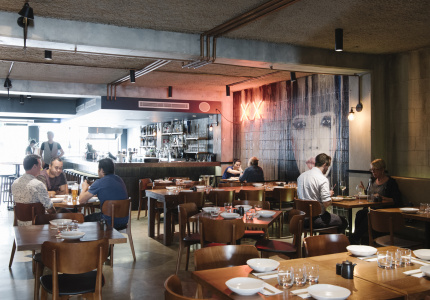