With twilight parties, a whole spit-roasted cow, orange wine and raw-cheese masterclasses, Rootstock Sydney is not a typical wine festival. It's returning to Carriageworks in November. Broadsheet looks forward to partnering with grassroots, boundary-pushing food-and-wine festival Rootstock Sydney when it returns to Carriageworks later this year.

Launched in 2013 by a team that includes wine writer Mike Bennie, restauranteur James Hird (ex Buzo and Vincent), Giorgio de Maria (ex 121BC) and Linda and Matt Young of Black Market Sake, the sustainable, biodynamic and organic-focused food and wine festival has grown year on year into one of Australia's most interesting, in more ways than one.

Firstly, wine is just one facet of the entire not-for-profit Rootstock Sydney experience. Under the Food Market umbrella this year there'll be entire pavilions dedicated to raw cheese, indigenous food, slow food and "Every different style of coffee you can think of," says de Maria, who's working with Paul Geshos from Mecca Espresso to put the coffee pavilion together. "We've got 11 roasters from Sydney, Melbourne and Byron Bay, including Proud Mary, Small Batch and Seven Seeds," he says. "It's very collaborative. All the roasters will be rotating all day, working together on tutorials and masterclasses covering everything from Aeropress and filter to espresso." For Bennie, "It's not going to be just a couple of baristas turning up with their coffee carts and showing off their roasts, this is much more comprehensive, detailed and fun."

"Comprehensive, detailed and fun" are three words that are spot-on to describe what you'll find at Rootstock Sydney. The team has searched widely to curate a roster of young and exciting chefs and restaurants that are, "Sympathetic to farmers," says Bennie. "We're bringing the farmers to work with the restaurants, side by side in the food market. Visitors can experience the raw product from the farmer, and discuss its origins."

More are to be announced, but stalls in the market will include Bird Cow Fish working with Martin Boetz from Cook's Co-Op; the team from Pinbone, which will put together a stall featuring entirely foraged produce; Hartsyard with Breakout River Cowra Lamb; Marrickville's Cornersmith; Brickfields, Flour & Stone, Cafe Paci; Sagra; MoVida Sydney; and Ester.

A big influence on the festival and Mike Bennie has been author Bruce Pascoe and his book Dark Emu. It undermines the misconception that Indigenous Australian communities, in particular the Yuin people, were solely hunter-gatherers, and highlights various farming and agricultural systems that were actually in place pre-settlement. For Bennie, this is groundbreaking, and Rootstock Sydney will raise funds for the Yuin farming community and tell the story of what the scope of agriculture and farming was like pre-settlement. Though a few restaurants and chefs are starting to dabble in native ingredients, for Bennie, "It's not a twee thing, we think it's important. Sustainability starts from what was here first, we want to get that message out. If we're careful and clever enough, Australian native produce can become mainstream. We want more people to be involved so that it can grow, and motivate more chefs and restaurants to look toward communities like this to help sustain the growing of indigenous products." Pascoe will appear at the Indigenous pavilion and will also be the feature of a talk on supporting this unique farming community.

There will of course, be wine to try and buy. "We've unearthed some younger generation producers trying their hand at natural winemaking," says Bennie. "They're delicious wines that thrill because they show an alternate personality of Australian wine." Some legends of the international wine scene will also descend on Australia from places such as Georgia, South Africa and Italy. One major difference you'll find at Rootstock Sydney is that only wine producers themselves will pour their juice. "Not a sales person," confirms Bennie.

The tone will change drastically into a real celebration when the sun goes down. "We'll be shifting away from the daytime program's more educational feel to just immersing ourselves and visitors in amazing wine from amazing people. There'll be sour beer, an orange wine bar, breweries that are banging out interesting beers – it will crank up into a total party. It's bacchanalian, with no wank or preciousness, an all-in good time." There'll also be surprises in terms of music, too.

Tickets are on sale now, we suggest buying now, and buying many. 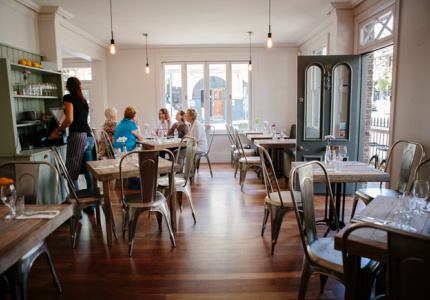