Visit the diner – formerly home to vegan pasta place Peppe’s – for pizzas like the New Yorker (buffalo mozzarella, fior di latte, double pepperoni and parmesan), and a confit-mushroom number with taleggio cream. There are also two square-pizza options, including an homage to one of NYC’s most famous pizzerias. 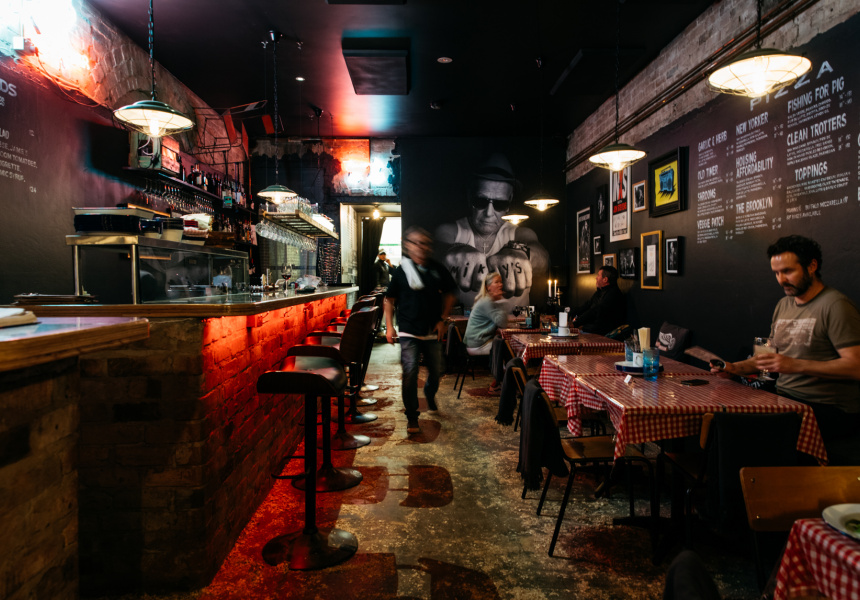 Upon landing in Sydney after living in the US, one of the first things Mikey Greenhalgh did was install a pizza oven. The UK-born chef and pizza enthusiast built his back-garden oven in 2016 and within a year had established Mikey’s Pizza, a New York-inspired diner in the quiet northern beaches suburb of Killarney Heights. Five years later, and his family-run, rock’n’roll-influenced pizzeria has found a new home on Bondi Road. The reimagined Mikey’s Pizza is an all-out ode to NYC’s pizza joints.

Greenhalgh’s interest in the art of pizza was born in Italy, where he spent two years working as a chef before he turned 20. The time he spent in New York compounded his passion and sparked an appreciation for New Yorkers’ flexible approach to the genre.

“Sometimes you want to come with friends, order 10 pizzas and rounds of mozzarella sticks for the table, other times you just want a quiet slice by yourself at the bar,” Greenhalgh tells Broadsheet.

The New York influence is evident long before you enter the new Bondi diner: warm light filters onto the street through retro net curtains, and a flashing light box hangs above the door with “Mikey’s Pizza Bar” illuminated in neon red. Inside, there’s exposed brickwork and copper pipes, as well as gingham vinyl tablecloths and a hearty dose of rock’n’roll memorabilia. Greenhalgh’s hand can be seen throughout; the refurbishment of the space, formerly home to vegan pasta joint Peppe’s, is his own handiwork.

The new menu is a simplified version of the Killarney Heights original; there’s a focus on high-quality ingredients, and staples done well. “We’re in Bondi, and here less is more,” Greenhalgh says.

Stone-baked pizzas dominate the menu. Options range from the New Yorker (buffalo mozzarella, fior di latte, double pepperoni and parmesan) to a confit-mushroom option on a taleggio-cream base. The classic round pizzas come in 14-inch or 18-inch sizes, with rotating flavours by the slice. And Mikey’s also serves up two square options: the Grandma Square (a focaccia-based pizza recipe credited to the Italian grandmas of Long Island), and the Di Fara Square (an homage to Dom DeMarco, the late owner of Brooklyn’s famous Di Fara Pizza; it’s topped with pepperoni, three cheeses and capsicum).

Non-pizza options include a salad made with micro-leaves from a Terrey Hills farm owned by Greenhalgh’s friend; crunchy fried chicken; and an heirloom tomato and burrata salad in a tomato vinaigrette. The Soprano board is loaded with a rotating selection of cuts from Vic’s Meat, house-made pickles, olives warmed in lemon oil, Iggy’s bread and stracciatella from Marrickville’s Vannella Cheese.

“People don’t want big menus anymore, and with the price of goods coming in and out of the country, you can’t have an extensive menu. There’s nothing worse than wasting food, so we’re just keeping it simple – I want to be known for doing really good pizzas,” says Greenhalgh.

The drinks menu is similarly streamlined, with a selection of wines, and a few local and international beers on draught. One of Greenhalgh’s favourite beers back in NYC was the Italian lager Birra Moretti, so that’s on the list alongside brews from Bondi’s Curly Lewis.

Despite his name dominating, Mikey’s is a family affair, and guests will likely be greeted by Greenhalgh’s partner if the eponymous owner is in the kitchen. “We’ve all got a role to play, and it’s a hard industry to work in, so my ethos is, let’s make this as fun as possible.” 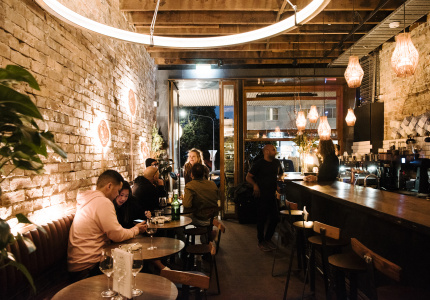