The Rise and Rise of Wine Festivals

Are wine and food festivals the new music festival? 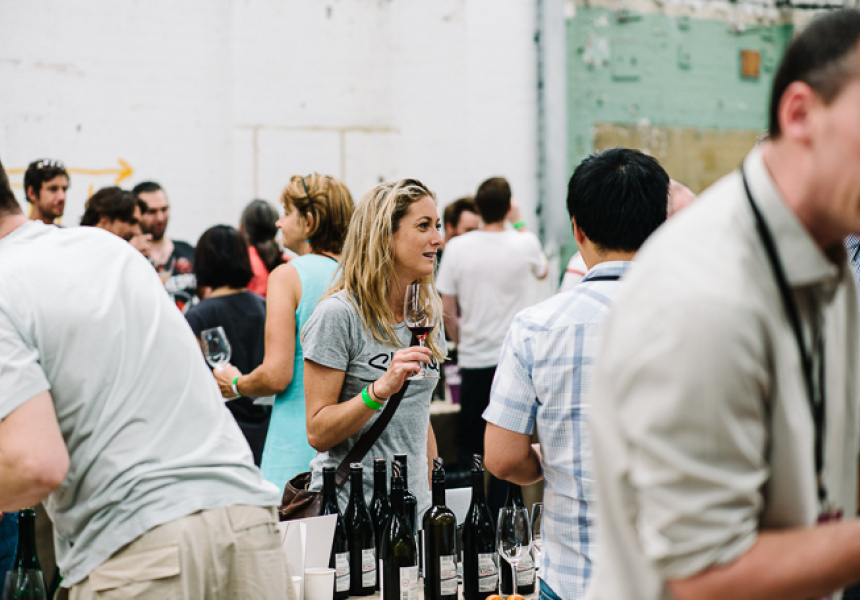 While sweating off body paint in the Boiler Room at Big Day Out and navigating mudslides in plastic ponchos at Splendour in the Grass has its charms – another breed of festival in Sydney is covering something else entirely – wine. A bounty of festivals showcasing various drops is set to appear throughout the city over coming weeks.

“Sydney is one of the great cities in the world to drink in,” says Mike Bennie, co-founder of Rootstock Sydney and a freelance wine writer. Rootstock Sydney is a sustainable food and wine festival at Carriageworks at the end of November. It champions organic, biodynamic, sustainable and artisan producers, all under the broader umbrella of natural wine. In its third year, Rootstock has expanded in 2015 to include more new artisan producers, a paddock-to-bottle whisky producer and a host of new international participants, including wine producers from the US, South Africa and Georgia.

Dan Sims started Pinot Palooza, which is coming up this long weekend, because he saw a growing market of people who wanted to know more about wine. “Never before have people been more interested in what they consume,” he says. Pinot Palooza is touring east-coast cities throughout early October. A sister festival to Sims’ other red celebration, Game of Rhones, Pinot Palooza sounds just like an indie-rock festival with a line-up, sideshows and backstage passes. For Sims, appreciating wine needs to be more fun than factual, not so dissimilar to appreciating the reverberating bass of your favourite band live. “If you like music, you go out and consume it, download it, listen to it, see live bands. You don’t wake up and decide to go to a masterclass! [Wine] festivals are a way to get to know a whole range of styles of wine in a social environment.”

“In Sydney, being the biggest wine market in Australia, we are fortunate to have access to so many wonderful wines,” says Kieran Tanner, co-founder of the Vino Paradiso festival. “This is driving a culture of discovery and learning, all with the undercurrent of consuming amazing products in distinctive and enjoyable environments.” At Vino Paradiso in November, punters can try varietals from 32 of the country’s iconic wine regions while meandering through the historic alleyways of The Rocks. Creators and cousins Tanner and Matt Williams have been watching the change in Sydney’s spring and summer festival line-up, and have considered whether food and wine festivals are perhaps the new music festival. While we’ve lost Harvest, Peats Ridge, Big Day Out and Future Music, the Vino Paradiso team notes the increasing popularity of events such as Taste of Sydney, and the arrival of newcomers such as this year’s Wine Island, taking place in November.

Set on a tiny island in Sydney Harbour, ticket holders to the completely sold-out Wine Island festival will be able to taste more than 100 Australian and New Zealand made wines, and all at an entirely enviable outdoor island setting. “Sydney has a playground of beautiful little islands scattered about the harbour that are underutilised, so I thought it was about time we made a big deal about them,” says Wine Island founder, Kristen Francis. As for why Australian wine festivals are on the rise, Francis says it's our blissful outdoors. “Sydney's outdoor culture lends itself well to drinking, or should I say, experiencing wine.”

So is this an evolution in our national drinking culture that just makes sense considering our vineyards, warm weather and curiosity for new and fun experiences? Whatever the reason, according to Rootstock’s Bennie, we are in a good spot when it comes to wine and experiencing wine. “[We are] unfettered from imposing local wine regions immediately on our doorstep, which is a benefit and a loss. Sydney can pave its own way with how people eat and drink,” he says. “There’s more variety of wine in Australia than ever, with young, artisan producers creating beautiful wine, but also a raft of incredible importers who work tirelessly in Europe and beyond to fill our cellars with amazing things to drink.”

Broadsheet is the proud media partner of Rootstock Sydney 2015.