Wilson’s menu is all about Aussie pub classics with contemporary twists – rissole sandwiches with beetroot jam, potato-scallop butties with curry sauce, and those ’90s stalwarts: potato wedges (but with labneh and fermented chilli in place of sour cream and sweet chilli). 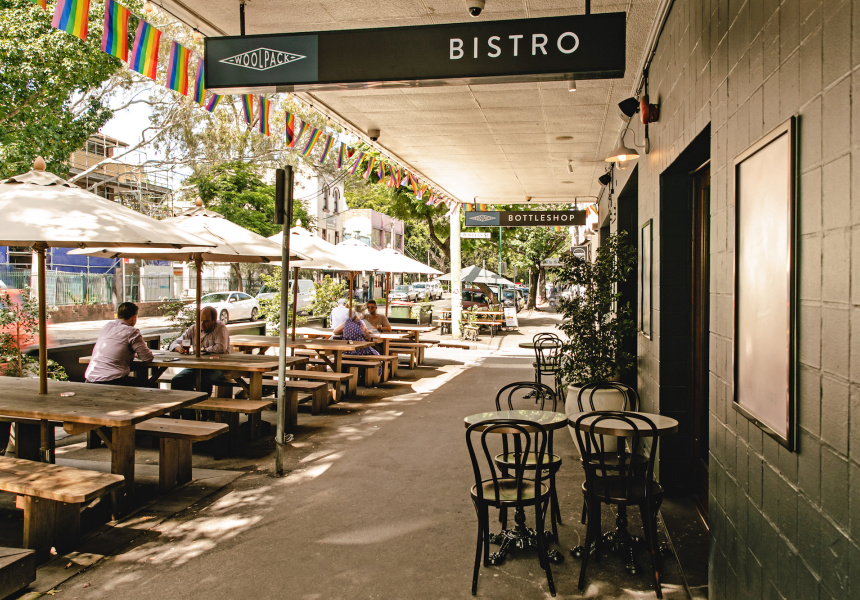 Taking over an old-school neighbourhood pub involves toeing a fine line. Change too much, and long-time locals might walk away. But keep things the same and you run the risk of becoming stagnant and not drawing in new customers. Aaron Crinis – who owns Glorietta and Glory Days in North Sydney – has recently taken over The Woolpack in Redfern, a Federation-style terrace boozer that’s been keeping Redfernians in beer and rib eye for decades. And by all accounts, he’s successfully walked that line.

Crinis quietly took over the pub last year, but used the ups and downs of the pandemic to his advantage, taking time to see what did and didn’t work in the space.

“I stepped lightly,” Crinis tells Broadsheet. “I changed the menu, which was received well … then started stripping it back, seeing where I needed to change the direction of the pub. It needs to attract the locals, but then to bring in a new [crowd].”

Now he’s got a better idea of what will work, he’s enlisted Jaime Wirth – who was integral in recent revitalisations of beloved community pubs The George Hotel, The Old Fitz and The Duke of Enmore – to bring his creative touch to The Woolpack. Toby Wilson, of Ricos Tacos, who’s worked with Wirth on menus at The George and The Duke (both pubs have since changed hands) was also brought in to overhaul the menu.

“I love [Toby’s] food,” says Crinis. “He does delicious food without trying to trick things up too much. He really hit that that brief of classic English pub and milk-bar vibes. And that works really well with our existing chef. It’s a really nice marriage.”

Wilson’s menu features recognisable pub classics with a few contemporary twists. Schnitties come with gravy and lemon – but a rissole sandwich is smeared with beetroot jam, while a potato-scallop butty comes with curry sauce. That ’90s pub classic, the potato wedge, is on the menu – but its daggy former friends sour cream and sweet chilli have been ditched in favour of labneh and fermented chilli. Onion rings come with malt vinegar for dousing, while potato chips and French onion dip tick nostalgia boxes. While Wilson has masterminded the menu, head chef Alberto Facci will execute it day to day.

Crinis says they’ve also had to find a balance when it comes to the drinks menu – there’s the minimal-intervention wines that younger crowds are drawn to, but a lot of classic drops remain. “I think having a real mix of clientele coming in, it’s nice to be able to keep a lot of those [classics].”

Meanwhile, the interiors have been slightly de-grittified – but don’t expect a perfectly polished pub experience. Wirth has taken as his inspiration the eclecticism of old-school boozers. Walls are hung with old photos, while vintage tchotchkes sourced from the surrounding area (and the upper levels of the pub) decorate the room. The old wooden bar remains, but has been inlaid with shiny white tiles to tone down the grunge.

After years of lockouts, then lockdowns, Crinis is feeling optimistic about the future of drinking and dining in Sydney.

“When Jaime and I were first chatting, it was about this feeling of rebirth in Sydney,” says Crinis. “There’s so much to be excited about right now.” 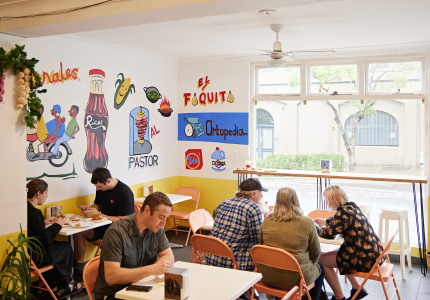