From the furniture (made from pineapple-leaf fibre and recycled milk bottles) to the drinks (crafted with produce destined for landfill), it’s pioneering a new mode of hospitality without losing focus on smashable drinks. 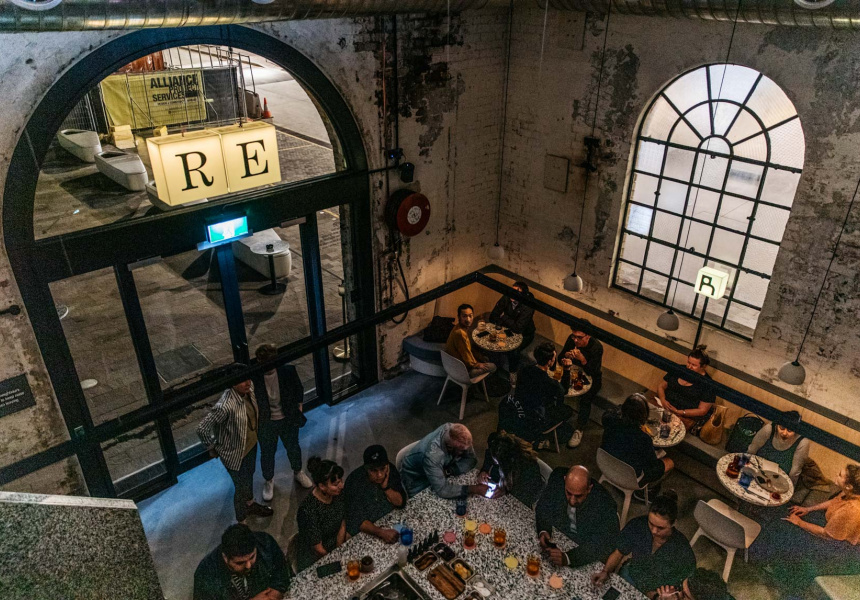 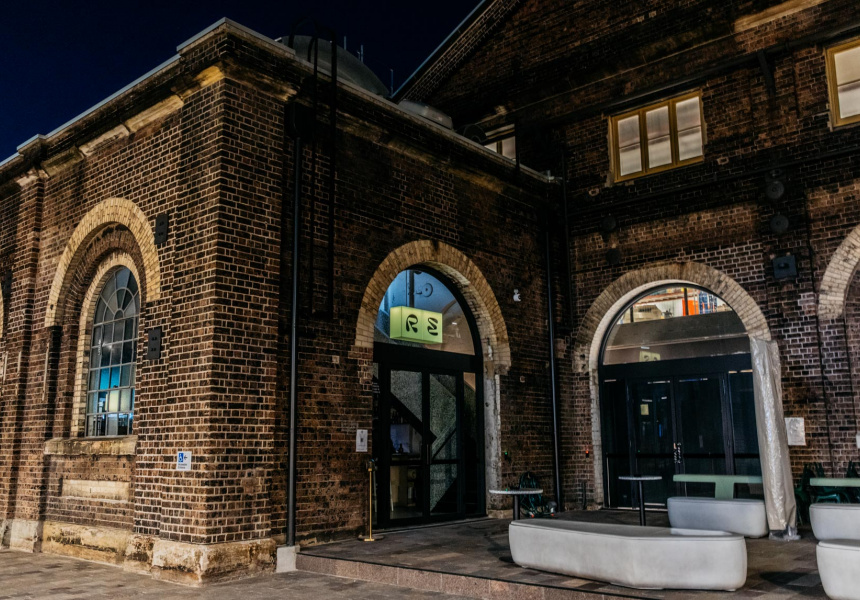 When Matt Whiley first stepped into what would become Re– in South Eveleigh – the sprawling Mirvac development near Redfern station – all he was going off was the former locomotive workshop’s potential. As he and his team dug into the walls and poked through the ceiling, the bones of the heritage-listed building revealed themselves: raw brick, a tin roof, arched windows with a patchwork of panes. Months later and the building’s restoration is complete – fusing old and new, and wedding it to a concept that couldn’t be more forward thinking.

A leading international figure in the bar world for his pioneering London bar Scout and its now-closed Sydney spin-off, launched in partnership with Maurice Terzini (the Icebergs and Cicciabella restaurateur, who also has a stake in Re–) at the top of The Dolphin Hotel in 2019, Whiley approached Re– as the next step in a career that’s always aimed higher. He’s interrogated every aspect of the opening process to build a bar that rethinks the wasteful practices so prevalent in hospitality: from the materials and the supply chain, all the way down to the drinks themselves. It’s waste-focused, sure – just don’t call it that.

“We call it a regenerative drinks program,” Whiley tells Broadsheet, “because really what we’re looking to do is to give something a new life. And the produce we’re getting is really good – it’s not like we’re getting mouldy stuff from the bin; we’re getting produce that you’d happily pay for.” He speaks of peppers going unsold due to their size, and punnets of strawberries destined for the garbage because one or two had turned soft; both will grace his menu.

For Whiley, Re– is a way to start a conversation about waste, but it’s also an opportunity to build sustainability into the very fabric of a venue. And he has, literally. The “leather” on the banquettes is made from pineapple-leaf fibre. The tabletops, the staircase and the bar look like terrazzo, but are made from recycled milk bottles.

Committing to these materials was a risk, Whiley says – there was limited opportunity to touch or feel many of them before ordering – but the space speaks for itself.

“It was a massive gamble, and there was a time where it seemed like it was very plastic everywhere,” he says. “It wasn’t until soft furnishings started going in that it started to soften down a bit – I think the result is pretty epic.”

Any reservations are put to bed by the details: the Maison Balzac glassware with minor imperfections diverted from the scrapheap, the Mud ceramics made from excess clay, the coasters – puck-like things in pastel shades – made by Defy Design from post-consumer plastic. Whiley points out a tiny metal box behind the bar – a bin – then moves to the snacks menu.

Designed by Icebergs head chef Alex Prichard using market surplus and trim from the Icebergs menu, the list of small dishes hits hard. There’s the sorbet, made with fermented pineapple skins and plum, and topped with salt and olive oil. And the puffed beef tendons sprinkled with togarashi. But there’s no posturing.

“We’re just trying to serve some delicious food that we’re saving from somewhere, and showing that you can make tasty food out of something that is deemed surplus or often thrown away,” says Whiley. Low-waste doesn’t mean virtuous, either: one cheesy flatbread holds ’nduja and a soft egg, the other pays tribute to the Welsh rarebit at London’s St John – itself a pioneer in reducing waste, via its nose-to-tail philosophy.

Whiley’s team, meanwhile, is a who’s-who of the Sydney bar scene, with Ho Song (Cantina Ok), Evan Stroeve (Bulletin Place) and Jake Down (This Must Be The Place, Scout London) on the tools. And while they’re fermenting banana skins and running rotary evaporators à la Scout, the drinks tread a line between familiar and novel.

In the Margarita, the twist is a hint of rockmelon and a jolt of chilli; in the Sbagliato, it’s a splash of rhubarb liqueur. There’s a section of spritzes (in anticipation of a Ketel One terrace opening in May), while the signatures go harder with ingredients such as ant tamari and peanut butter. The “Re– search” drinks are as ambitious as it gets, with three cocktails mimicking elements found in our galaxy (“Mars”, for example, does it with rice syrup, pepitas and the compound used to coagulate tofu). Anyone wanting to keep things simple can order Wildflower beers, Empirical Spirits tinned cocktails and Latta wines poured from casks.

As for Whiley’s aims? “My hopes are that we’re really busy from day one and that people love what we do, then the agenda we have behind the scenes, we’ll handle on our own,” he says. “We’ll document it, and it’ll be there for people to see, but if you’re not interested, and you just want to have fun, we’ll be here to do that.”