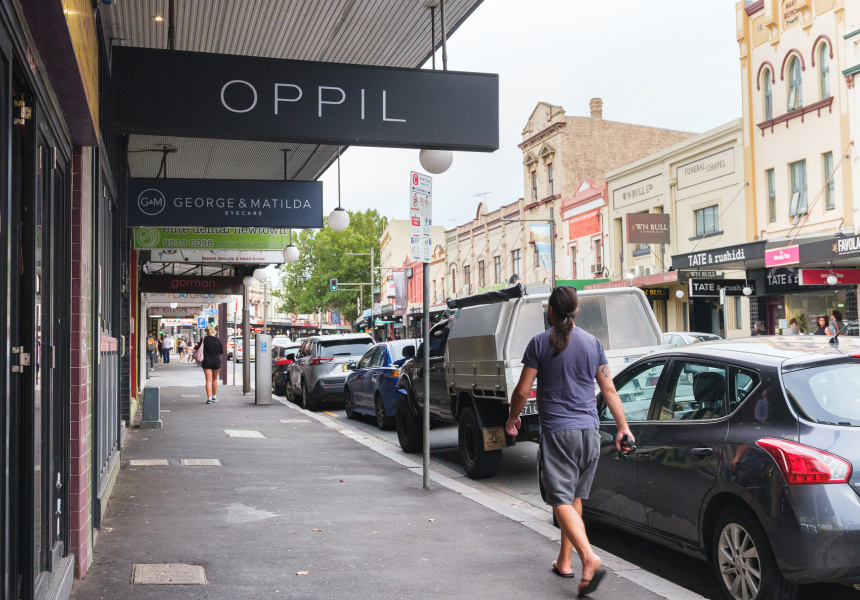 We all have our hangover cures – mine’s a bottle of lemon-lime Gatorade and a ham-and-cheese toastie. But what if you didn’t actually need a day-after salve? What if after a few drinks you actually felt okay the next day? Colin Dahl, who studied engineering, reckons he’s hacked the hangover with the grape-infused spirits he’s serving at his new Newtown bar, Oppil.

Oppil looks like a normal Newtown bar. The walls are exposed brick, the stools at the front windows look out on King Street and its walls are lined with work by local artists. What’s different is the small number of unlabelled bottles behind the bar. They’re all filled with liquids in various shades of pink and red.

“This is our theory: the antioxidants from the grape infusion [balance] the toxicity of the alcohol as it breaks down,” Dahl tells Broadsheet. “When the ethanol breaks down into other things, they’re the things that cause hangover symptoms.”

Oppil began with a Hunter shiraz, which he bolstered with extra antioxidants from grapes (he won’t divulge how). He served a sample group either Oppil’s shiraz or another brand’s, and asked them to rate their hangovers the following day. Those who consumed the Oppil shiraz overall rated their hangover symptoms as 300 per cent less severe than those who had consumed the standard shiraz.

The new bar is serving that shiraz – which is surprisingly drinkable – as well as cocktails made with spirits also infused with the high-antioxidant grapes. All the classics are there: Old Fashioneds, Margaritas, Mojitos and even spritzes. They’re tasty and virtually indistinguishable from cocktails made with standard spirits. (Whether they’re drinkable on their own remains to be seen.)

Broadsheet samples several cocktails, a spritz and sangria, as well as a glass of the shiraz, and we certainly aren’t sober after our session (these aren’t watered-down cocktails). It’s an amount of alcohol that would typically lead to – at the very least – a dusty head and a craving for fried food. But we wake up as fresh as if we’d been on the waters all night.

Dahl says he hasn’t undertaken any scientific research into his creation – his claims are based on small-sample observations (12 people at a time). “We’d like to measure at some stage what [antioxidants are] being transferred across from this grape infusion,” he says. “But right now we’re happy with the end result, and maybe we’ll work back from that later.”

Oppil is currently is soft-launch phase, and officially opens on March 4, 2021.