Plus muffuletta, bagels from Small Talk, smoked meats from LP’s and pastries from Tuga. 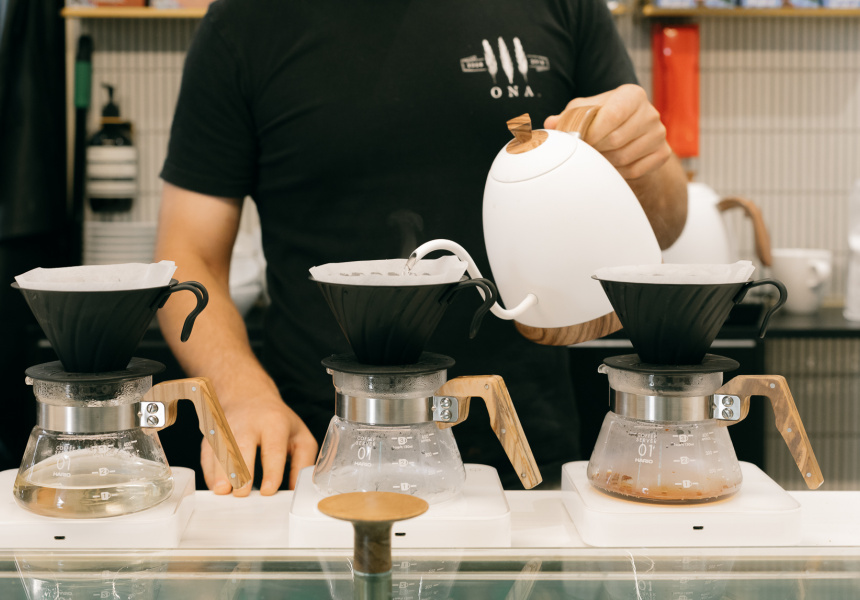 If anything could make us ditch our working-from-home set-ups to return to the office, it’s the thought of getting lunch every day from Sevens Specialty Coffee – a tiny new CBD eatery and coffee house that’s just opened on the corner of King and George streets.

Caroline Olah from Reddie Design transformed the space from a gloomy office-building lobby into a light-filled haven.

“I wanted a timeless feel. Nothing minimalistic,” owner Zach Hiotis tells Broadsheet. “It’s a beautiful lobby. I want it to feel sophisticated and elegant.” And it does, with black-marble tables, elements of rattan and brass, and sustainable timbers.

The same discerning approach Hiotis used to great success when he opened nearby diminutive, much-loved cafe Regiment in 2017 has been applied at Sevens. He uses coffee beans from Canberra’s Ona; bagels from Small Talk in Dulwich Hill piled high with smoked deli meats from LP’s Quality Meats and Lucas Meats; and pastries from Tuga in Clovelly.

“I like to do stuff in-house, but I also like to bring in amazing suppliers, too,” Hiotis says as he places the cafe’s signature “fish bowl” on the table – the bowl itself is crafted from the same sustainable timber as the furniture, and it’s filled with house-pickled green tomato, edamame beans, dry salted cod with capers and dill, green slaw with smoked corn, crushed avocado, pickled onions, Vietnamese eggplants, black barley, and dehydrated lime slice.

And that’s before we venture over to the coffee bar.

“It’s not just another lobby cafe where you grab a coffee and run,” Hiotis says. “You can sit down and have a space in the middle of the city to have a coffee experience. We feel that brings another level of elegance and sophistication to the coffee world.”

Ona coffee beans are frozen at their peak and stored in test tubes in a temperature-controlled environment to lock in the flavours. At Sevens’ brew bar, the reserve-menu beans are displayed in a first-of its-kind, custom-built hydraulic-lift freezer with a glass table top so visitors can see it all – it’s like a jewellery store for coffee geeks. The reserve-coffee menu reads like a cocktail list and showcases some of the world’s rarest and highest-scoring coffees, which are served as espresso from the elegant La Marzocco mod-bar, or as a pour-over filter coffee.

Like Regiment, Sevens uses Übermilks – gadgets that pour pre-steamed milk – and enthusiasts will note the four Anfim grinders; a Fetco machine for batch filter; a customised Sanremo 3 Group espresso machine; and the first Quinspin (a device that removes the need to bang empty your coffee puck) in Australia. The baristas who oversee the lab include Cameron Tape, who came over from Regiment, and ex-Ona baristas Roy Nguyen and Jeremy Smith.

But it’s not all about the coffee. There’s kombucha and cold-pressed juice available on tap, and a strawberry and rose house soda. And the muffuletta is sure to become a destination dish – with two slices of focaccia encasing ricotta-filled zucchini flowers, salami, mortadella, truffle salami, leg ham, artichoke, parmesan, mozzarella, provolone, olive tapenade and ’nduja – just listing the ingredients is exhausting. The wild-mushroom truffle toastie is made with three cheeses, and the bagels – vegan, chicken, Wagyu or fish – are all served with a side of crisps.

“Being such a busy lunch spot, everything comes out within less than five minutes and everything is available to take away,” Hiotis says