There’s macarons, obviously. But you can also expect a twist on the classic scone, and Zumbo’s famous “V8” cake, as well as savouries such as lobster rolls and goat’s cheese tarts. Plus, a roaming champagne trolley. 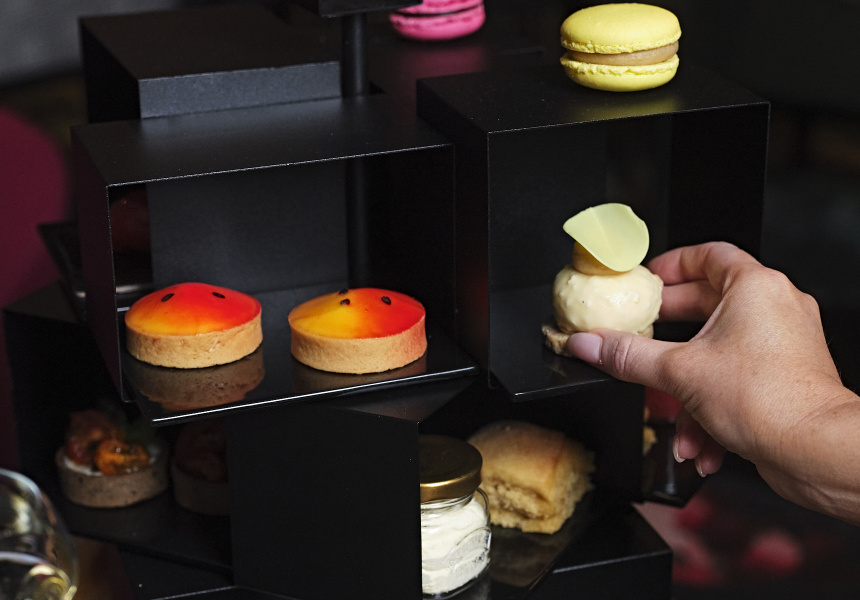 The man once described as “Australia’s answer to Willy Wonka”, master patissier Adriano Zumbo, has partnered with QT Sydney to launch a theatrical high tea.

The QTea, much like the quirky brand and dessert chef, is far from traditional. Held in the luxe lobby of the hotel every weekend, the tables look like they’ve been set for the Madhatter’s tea party. And they kind of have been.

“QT wanted to do something different and fun,” Zumbo says. “My brand has been quirky and different from the start – whether it was the flavours I used or the names I gave my cakes. I think QT is like that too; it’s quirky and a little bit mysterious. We are a great match.”

The hotel blends gothic, art deco and Italianate-influenced architecture and has long been loved by Sydneysiders and visitors for breaking the stuffy mould of more traditional hotels. Zumbo, known to some as the “sweet assassin”, is one of Australia’s most recognised patissiers, a regular Masterchef guest judge, and co-host of the Netflix series Just Desserts. His collaboration with the hotel follows the recent appointment of veteran chef Sean Connolly, who now oversees QT Sydney’s Italian-leaning restaurant, Gowings.

The high tea arrives in a black, three-tiered cubist-inspired tower, with each dish hiding inside its own black square. Zumbo says that he has started with dishes that fans will recognise, along with some new creations.

“We’ll start off with the classics like macarons and the passionfruit tart, and then drop the V8 a month or so in,” he says, referring to his famous cake that features eight layers, each with a different vanilla texture.

Bespoke dishes crafted especially for the high tea include a savoury twist on the classic scone, served with strawberry and lemon myrtle jam; a heart-shaped cake with a red glaze and pistachio and raspberry centre; and a white-glazed yuzu and sesame vanilla cake.

On the savoury side, expect champagne lobster rolls with coconut, chilli and lime mayonnaise; goat’s cheese tarts with asparagus and caramelised tomato; and a play on a caesar salad (spoiler: it’s like san choi bao). To drink, Perrier-Jouet leads a selection of 60 champagnes from QT’s award-winning wine list, and the tea menu includes a bespoke blueberry macaron blend designed by Zumbo.

“I want to have a lot of fun with this,” says Zumbo. “And QT is the perfect setting for that. There’s going to be a DJ and a champagne cart – it’s a great place to spend the weekend.”

The QTea experience is available on Saturdays and Sundays, and starts at $95 per person.