We ask the man behind the plush Victor Churchill butcher experience about opening a luxury store at a time when everyone else was tightening their belts. 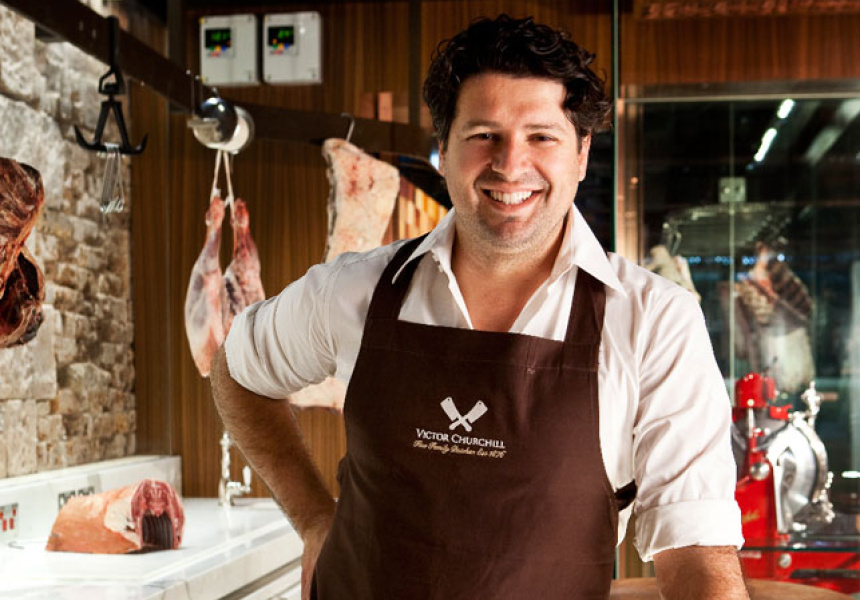 In his offices above Vic's Premium Quality Meat in Mascot, Anthony Puharich is leaning back in his chair to think. When asked why he opened Victor Churchill, his plush butcher store in Woollahra, right at the time when everyone else was bracing for the cutbacks of the GFC, he needs a moment or two to contemplate.

“It’s a great question,” he smiles, pausing to break down the answer into manageable bites.

“Really, all the GFC stuff was all only starting to get flushed out towards the end of 2008 and here I am at the beginning of 2009, embarking on a project that was basically a spare-no-expense butcher and retail experience,” he chuckles at his audaciousness, nodding as if to indicate how mad it sounds.

For anyone who has perused the lush offerings of the theatrical retail space, with a much-discussed fit-out price of over $2 million, it’s easy to think that, yes, a stroke of madness behind the venture.

Everything in Victor Churchill speaks of quality, abundance, theatre, luxury and indulgence – the antithesis of the retail restraint that was to come. Bronzed sausages act as door handles, mirrored cabinets house dressed veal racks and forests of upright lamb shanks, while huge sides of meat rotate on a suspended conveyor belt in a glass dry-age room, all finished with a backlit wall of Himalayan salt bricks. Each aspect of a Victor Churchill visit is designed to be more than just a trip to the butcher. It’s an experience – one that takes shopping far from the realms of the ordinary. You won’t find any ‘quick sale’ or ‘discount’ flags here.

So considering the appalling timing, and with consumers looking down the barrel of austerity measures, how did Victor Churchill not only open, but also survive to be the iconic foodie destination that it has become? For Phuarich, the answer has many facets and taking the time to hear them unrolls a story of passion, determination and strong family ties.

Puharich points out that Victor Churchill was only possible due to the family’s primary business, Vic’s Premium Quality Meat, wholesalers supplying the top restaurants in Sydney and Melbourne.

“[It’s] our core business...what we’re very good at. That’s what the industry knows us for. Because of that success it’s given me an incredible ability to be able to travel around the world.”

It was Puharich’s extensive travels that eventually gave him the itch to create a retail space celebrating quality and drawing on global influences and inspirations. “Whether it’s the Tsukiji markets in Japan, or Harrods in London, or walking through the Boqueria in Spain, Barcelona.”

But despite his wealth of experience and a desire to share it all in a retail space, this is not what Puharich would call the raison d’être for Victor Churchill. The real reason is family, and more specifically, his dad, Victor.

“He’s an incredible role model for me and an amazing inspiration,” he says. “He’s spent the last 40 years of his life getting out of bed at 2.30am in the morning for conditions that are cold and wet and full of meat and flesh. I’ve tried for a long time now to get my father to slow down, pull back and take it easy.”

But with a passion for his job and a work ethic that Puharich believes is characteristic of so many immigrant families of the 60s and 70s, he eventually gave up trying to convince dad to retire, instead developing Victor Churchill as a way for him to take a step back but still be involved in the industry that he loves.

“That was the main motivation behind Victor Churchill for me. It was a very personal one. It was about my dad and giving him something special, as well as my way of giving something back to him for all the hard work that he’s put in.”

But even with the potent mix of worldly experience, family expertise, passion and (yes) money that has gone into Victor Churchill, was it enough to make it float?

Puharich believes it’s about more than that. Location was always a key aspect and you can’t visit Victor Churchill without feeling its heritage – all 135 years of it. It’s the longest continually running butcher shop in Australia, albeit under different names and proprietors, and it was this heritage, along with the well recognised affluence of the area that convinced Puharich he’d found the right spot.

“You obviously have to be very careful about the location and where you put it to make it work. Woollahra just ticked all the boxes for me. It has a very European feel, down Queen Street with all the beautiful trees, and it has a beautiful community, village feel about it. That’s what I love about it.”

But being in the right place at the (questionably) right time was just another ingredient in the success recipe, followed by quality of product and attention to detail in everything from staffing to wrapping, according to Puharich. “It was about getting it right in every detail.”

But there is one final reason that Puharich thinks Victor Churchill has succeeded in a time when it certainly could have failed, and that was in the timing itself. “People are placing more importance on quality food, on eating good food at home and showing kids what fresh food is,” he says. “There’s been this groundswell interest in food. Because of that I felt that a beautiful, traditional, good quality butcher would be something that people would appreciate,” he continues, noting that he sensed growing discontent with the lack of quality and variety provided by big supermarket chains and a fatigue with the ‘get-it-all-under-one-roof’ attitude.

The GFC itself also played somewhat of a part in Victor Churchill’s success, creating a void in the market for a place where quality and luxury were the exception rather than the rule.

“There’s your point of difference and there’s your advantage straight away,” says Puharich. “There’s no guarantees in anything and I never ever thought that just because I am spending X amount of dollars that this thing was going to work or be amazing. No way in the world. Money doesn’t solve everything. If it’s not right and it misses the mark, it doesn’t matter how beautiful Victor Churchill is, you’re not going to be able to pay the wages.”

So, has dad settled gracefully into retail semi-retirement?

“I’m still working on that.”