The Power of Flowers 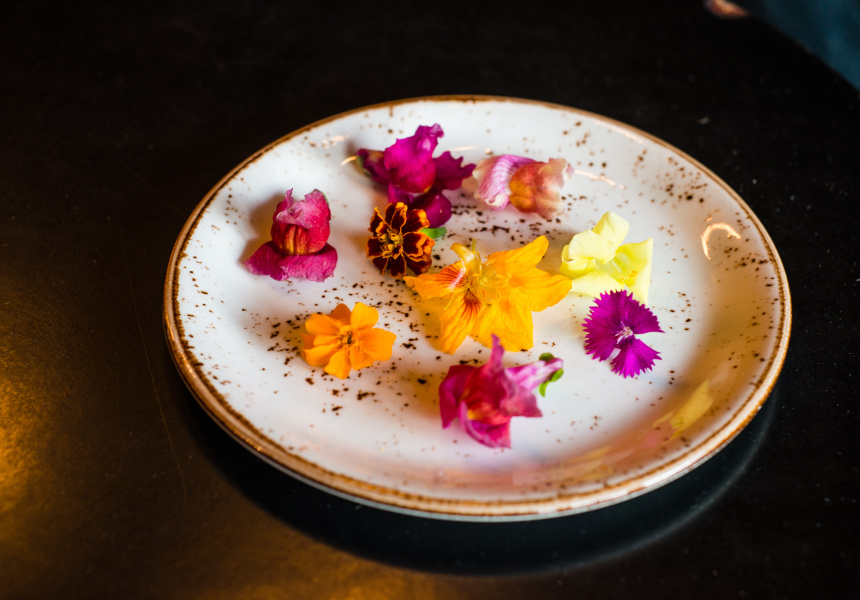 Despite what your Instagram feed might have you believe, flowers have been used in food and drink for at least 2000 years. The Romans were fond of flavouring their wine with rose petals; the Chinese used – and still use – dried flowers in tea; and orange blossom has always been popular in the Middle East and North Africa.

Edible flowers may be commonplace, but their visibility has been increasing due to their popularity as a garnish. Partly, it’s an increased focus on foraging (thanks to restaurants such as Copenhagen’s Noma), as well as social media’s quest for the perfect food photo. Edible flowers are everywhere: on cereal, pancakes, burgers and cocktails.

During World Class Cocktail Week, Bloodwood in Newtown is offering a three-course edible-flower-based food and cocktail match. But unlike venues that use flowers purely for ornamental purposes, Bloodwood’s chef and owner, Claire van Vuuren, is taking it further. “I’ve been trying to use more than just the pretty parts,” she says. “Using the roots, stems and leaves is a really good way to get a more interesting, herbaceous flavour.”

Van Vuuren uses dried flowers to build the base and structure of a dish or drink, such as Bloodwood’s rose-petal jam. “It doesn’t resemble a flower at all, but has a really striking rose flavour through it,” she says. Also on the menu are fried ba wong flowers – a type of flowering cactus that only blooms once a year, at night. Eating fried ba wong flowers is similar to eating fried zucchini flowers, although ba wong taste more like globe artichokes. “We deep fry them in a crispy batter, and pair them with a tamarind sauce,” says van Vurren. “It’s really quite nice as a snack to go with a cocktail.”

Bloodwood uses flower-infused spirits as a base for many of its drinks, such as lavender-infused Tanqueray gin and tonic, and a chrysanthemum-vodka iced tea. The latter is made by rehydrating dried chrysanthemum and adding rock sugar, Ketel One vodka and lemon. “We leave all the flowers in there, so it’s visually really striking,” says Van Vuuren. “Then we wedge one of the feathery leaves in, too. If you eat that, it changes the flavours in the drink quite dramatically.

“Flowers are often used as a token gesture, with no consideration for the influence they have on a dish. People should taste them rather than just look at them. They have really intense flavours that pair really well with certain things.”

That’s not to say they don’t work well as a garnish. Lobo Plantation makes a rose syrup that is used to flavour a few house cocktails, but it also loves flowers for their aesthetic appeal. Paige Aubort from Lobo says, “Flowers are bright, fresh, natural and easy to use. We use everything, from edible flowers, to long leaves, miniature pineapples and just eccentric-looking flora in general.”

“The beautiful thing about this industry is its creativity and diversity. If you were to give a punnet of edible flowers to five top bartenders, I can guarantee that the drinks and garnishes they came up with would not look the same. I love that.”