Taking over the former 121BC site, Wino will be more than just a waiting room, offering seafood and vegetarian share plates. 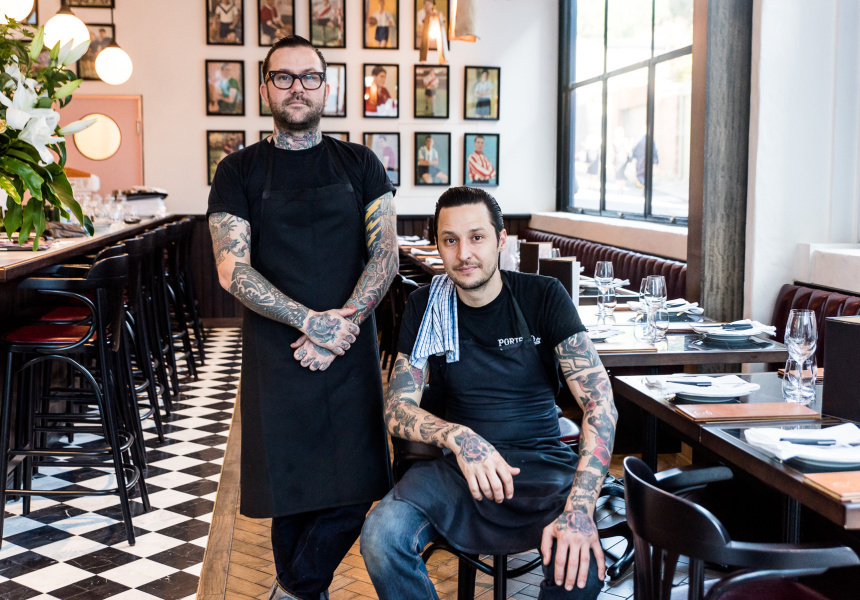 “It was a bit unexpected,” says Elvis Abrahanowicz (a part owner of Surry Hills institution Porteño) of opening a wine bar next door.

After 121BC went to market late last year (alongside co-owned venues by chef and restaurateur Andrew Cibej, Vini and Berta) , it was only a matter of time before Porteño pounced.

“It just made sense. It’s right nextdoor. When the offer came up, naturally we took it. It wasn’t something we were looking to do, it just seemed right,” says Abrahanowicz.

Ben Milgate and Joe Valore are also behind the project, which has been sensibly named Wino. It won’t be another Porteño, though. Despite the fact it will arrive with its own identity, the boys are adamant they won’t be changing very much when it comes to the design. “We really loved it,” says Abrahanowicz. “It’s a very simple space with one big table that sits 24 people. There’s not much you can change,” he says.

There’s something special about opening a venue with few seats. With less room comes more flexibility on food and drink, attention to detail, and a rule book that can be thrown to the wind. “It’s a very small kitchen. Very, very small,” says Abrahanowicz. “And it’s just easier. You just get some produce in and come up with eight dishes that day. The fact you can do what you want, cook what you want … availability is a lot easier, you don’t have to buy fish for 140 covers, you just have to worry about 30 to 45 covers.”

The ink is still wet on the food menu, but it will change daily and will revolve around seafood and vegetarian share plates. “It’s lighter. We’ve [already] got Porteño, we don’t feel like cooking up steaks,” he says.

There will also be a retail element, with an on-site bottle shop selling wine served in the restaurant. “It’s going to be the tasty stuff we like to drink. You can go in there and if you like something, you can get it take away.” Expect natural wines alongside the classics, with international and local varietals. “We never focus on one thing,” says Abrahanowicz. Digestives and aperitivos will also get a look in.

Is the wine bar a way to redirect excess traffic headed for Porteño? “I guess it will be used however people want. We’re always pretty loose with what we do, we let them evolve,” he says.

The idea is to open from 5pm until midnight to begin, although the bottle shop will be open earlier, and lunch service planned for down the track. “People can come in, have a drink and take some wine home.”

Wino is slated to open on July 17.