David Tsirekas Pops Up at Plunge

In a warm-up for his highly anticipated new restaurant in the CBD, Greek chef David Tsirekas takes over the kitchen at Plunge No.46 cafe in Summer Hill. 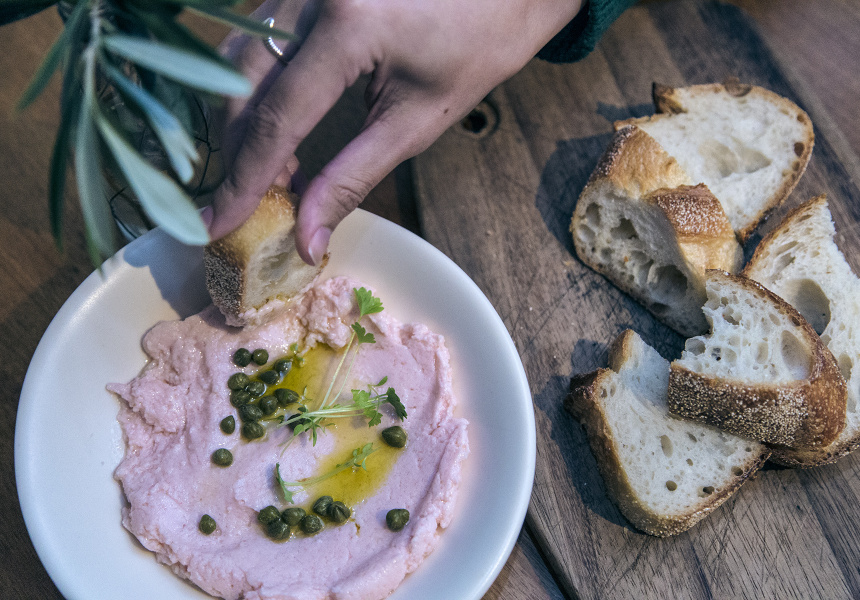 By day, Plunge No.46 cafe on Summer Hill’s main strip serves Middle Eastern-inspired breakfasts and mezze-style lunches. But on Friday nights until June, the kitchen will be turned over to a top chef for pop-up dinners.

David Tsirekas, the Greek heavyweight behind popular Petersham restaurant Perama and later Xanthi, Westfield City will be taking over. He’s at Plunge on secondment until the end of June, after which he’ll join a cracking team to open Greek restaurant 1821 in Martin Place.

“David has been cooking some of his classic dishes from his previous two restaurants and a surprise course from his coming restaurant, 1821,” says Plunge No.46 owner, Hesham El Masry.

The six-course set menu at Perama@Plunge changes weekly, but could include a succulent seafood mezze with pickled octopus, ouzo scallops and salmon dip, mushroom truffle mousaka or veal and pork meatballs with roasted potatoes. Pace yourself for a dessert of caramel baklava ice cream with semolina halva and sour cherries (or similar).

Food is complemented by a succinct wine list. Choose a pinot grigio from Italy or a South Australian shiraz. Or go all Greek with options from the well-regarded winery, Skouras.

“The pop-up is giving me a chance to re-focus my love of cooking and passion for maintaining a status quo of great Greek cuisine in Australia,” says Tsirekas.

1821 is a highly anticipated addition to Sydney’s dining scene due to Tsirekas’ cooking credentials and the company he’s in. The restaurant will be launched by Bill Drakopoulos of Sydney Restaurant Group (LuMi, Chiosco, Ormeggio), Jim Kospetas of the Civic Hotel and Jye Hong, current restaurant manager of Aqua Dining.

“1821 is a fantastic project. It’s going to be an amazing restaurant connected with the Russian Vodka Room Odessa downstairs. Like all restaurants should be, it will have a story and a soul, which will be filled with a love of Greek food and philoxenia [an act of hospitableness and welcome]. We want it to be a temple of Greek food that’s grown-up and mature but not modernised, where it loses its essence.”

In the meantime, there’s one item on the revolving Perama@Plunge menu in particular that embodies this essence: the best stuffed vine leaf you’ve ever tasted, which transpires to be made by Tsirekas’ 80 year-old mother, Jenny.

With this precious lineage in mind, Tsirekas plans to create a platform to protect and promote his heritage for the future. “To my mum and the women who grew up in the villages, the knowledge was passed from one generation to the next,” he says. “Bill Drakopoulos and I are working on forming a Council of Greek Chefs and Restaurateurs to hold seminars and workshops with the next generation, so we can pass the on knowledge about the palate, traditions and methods.”

Perama@Plunge runs every Friday night until the end of June. Bookings can be made by emailing bookings@plunge46.com.au.