A new cafe in Randwick that doesn’t take itself too seriously. Many of us will have fond childhood memories of playing duck, duck, goose. Nicholas Porter aimed to conjure that same sense of fun by naming his Randwick cafe after the game.

Open since April, the eatery occupies the old T’s Book Shop site on Avoca Street. Now, jars of chutney and jams line the exposed-brick walls, instead of second-hand textbooks. Before opening Duck Duck Goose, Porter worked, “more on the money-making than the creative side of hospitality,” including stints as a fine-dining chef in Australia and London, and running a sandwich shop in the CBD for eight years.

It wasn’t until Porter moved to Randwick with his family four years ago that he realised the demand for family friendly cafes. “There’s a lot of younger families in the area as of the last few years, so we’re trying to recreate the kind of cafes you’d find in Surry Hills or Bondi,” he says. “The kids can be occupied while the parents get a meal in.”

The back of the cafe is dedicated to child’s entertainment, with a wooden play table, toys and a chalkboard mounted on a patch of faux-grass. Kid-friendly menu items include muffins studded with pieces of brownie or Coco Pops.

True to the cafe’s kid-friendly philosophy, Porter already has eco-friendly projects in the works. He’s collaborating with Randwick Public. “They’re collecting our old coffee grounds, and hopefully, down the line, they’ll start growing some fruit and veg for us.” 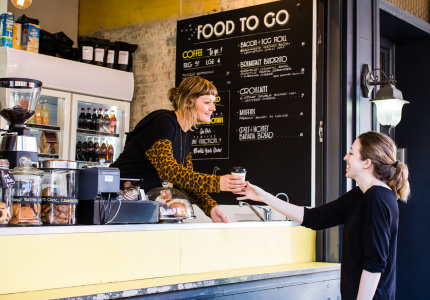