The owners of Xage have transformed the popular Crown Street eatery into a no-rules fusion joint serving spicy noodles and voluminous cocktails. The battle over who invented pasta – the Italians or the Chinese – has long plagued food historians. Some believe that Marco Polo, the Venetian merchant, brought pasta from China to Italy in the 13th century. While this rather romantic theory has been widely debunked, the jury is still out on whether or not the noodle is the ancestor of Italian pasta.

Fast forward a few centuries to a plant-festooned indoor-outdoor terrace on Crown Street in Surry Hills, where husband and wife team Nhu and Minh Nguyen sit in Bar Pesta, their newly opened Asian pasta joint. It’s on the site of the duo’s former Vietnamese restaurant Xage, which closed on the eve of its 10th birthday and reopened as the new mod-Asian eatery in December.

“While Asian pasta is not yet a common culinary term, it is an appropriate term,” says chef-owner Nhu, who also runs three Vietnamese Madame Nhu eateries in Surry Hills, Chatswood and Hornsby.

Bar Pesta’s owners drew on their uni days when coming up with the idea for their new venture. “When we were uni students everyone ate pasta,” says Nhu. “It didn’t matter if they were Australian, Asian or Italian. So we thought about which food people enjoy the most and what kind of food brings people together no matter what their culture.

“And this is how I like to cook at home, to blend the strong flavours of Asian cuisine with other ingredients, from Thai-[inspired] spaghetti, to Vietnamese nui [pork and noodle soup], to wafu pasta [wafu is the Japanese reinvention of Western recipes]. There has been a trend in recent decades to adapt Italian food to local tastes.”

On the menu is miso carbonara (spaghetti, plump pieces of chicken, a soft egg, cream, caramelised onion and nori) and aglio e olio (spaghetti, garlic, olive oil and Lao sausage). The Mushroom Wafu is an umami party of Asian mushrooms, nori and a dashi butter sauce served with linguine, while the XO penne is a jumble of sliced squid, mussels, prawns and house-made chilli XO. “Chilli is an important ingredient in most Asian cooking, and Bar Pesta's signature Asian pasta dishes are no different,” says Nhu. “Eight out of 10 of our pastas are spicy.”

But the standout dish is the Tiger Prawn Tom Yum, where linguine is served in a pool of galangal lime sauce with Asian mushrooms and tomato. The barbeque duck salad is refreshing and has a good amount of heat through the mix of cabbage, herbs and lime dressing. Snacks and sides include crunchy Vietnamese pickles, pork crackling with sriracha mayo and arancini balls. The cocktail list is classic and the pours voluminous.

Xage devotees will be happy to know that some signature dishes from the old days have remained on the menu, as well as its welcoming BYO policy. “Our regulars were so upset that our spicy beef curry was off the menu that we brought it back,” says Nhu. “We’ve mixed it up a little to make it into a pasta dish.”

This article first appeared on Broadsheet on January 28, 2020. Menu items may have changed since publication. 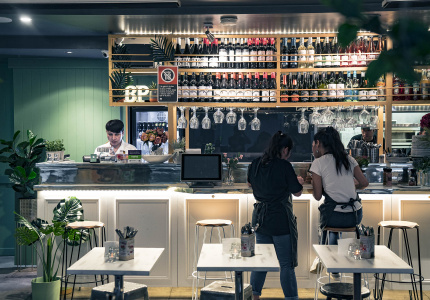