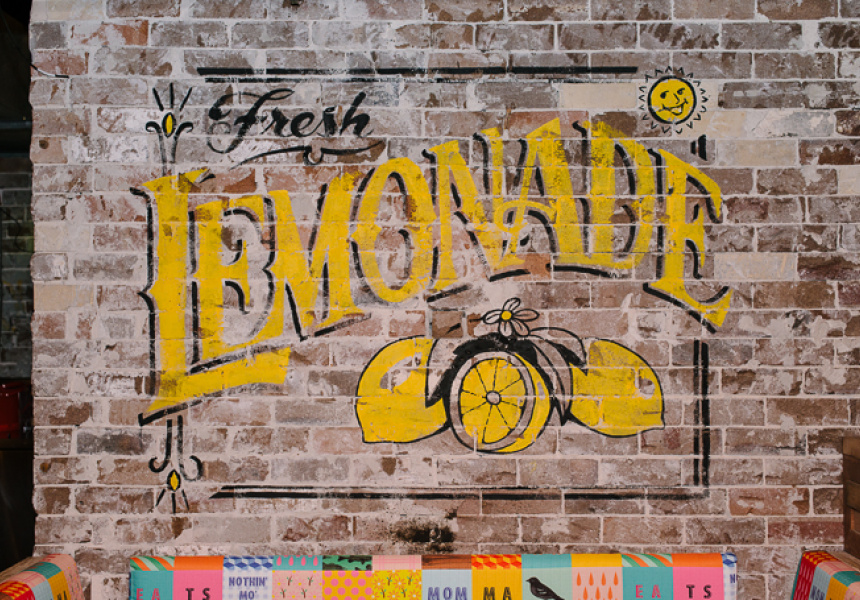 Newtown's Marlborough Hotel has been refurbished. Its back bar has been gussied up and now sports astroturf on the floor, hanging pot plants and elegant bar stools. The top floor has also been gutted and transformed, and it's now home to Miss Peaches, a lively new bar dishing up eats from America's southern reaches.

Enter through a dedicated doorway alongside the Marlborough, climb the steep stairs from the street and you'll be met with wood panelling on the walls, concrete floors and a collection of colourful, patterned booths snug up against stripped-back brick walls. A mellow, bluesy soundtrack drifts around the room and seeps out onto the bar's balcony. The old wooden fence that serves as the railing is a nice touch (and hopefully meets all relevant building codes).

At the bar, you'll find Young Henry’s, Reschs and Cascade on tap. By the bottle, you can sample tasty American brews like Sierra Nevada, Brooklyn Lager and Anchor Steam. The cocktail list includes things like an Atlanta Fanta (which has Jack Daniel’s, lemon and Fanta) and a Mississippi Sour made with Laird's applejack, lemon, bitters and a spicy honey ginger syrup. If you've got to drive home, you can sip homemade sarsaparilla, lemonade or ginger beer.

For eats, start out with some tater tots (accompanied by maple bacon ketchup), cornbread sliders (that come in mac ‘n’ cheese, fried chicken, chicken fried steak or beef short rib varieties), or some crawfish pies. Heartier feeds include blackened fish, fried catfish with hot sauce and crisp-skinned turkey drumsticks. Or you could just go all out with grits and gravy beef, gumbo or okra jambalaya. Finish the gluttony off with a slice of pumpkin pie.

Yep, the Marly's moved on from its days as a raucous uni boozer. Miss Peaches is slick and good fun, with just that right amount of silly. For a taste of the Deep South, head west to Newtown.