Patrick Friesen Pops Up with Fried Chicken and Noodles

Papi Chulo’s head chef is cooking the food he loves to eat. 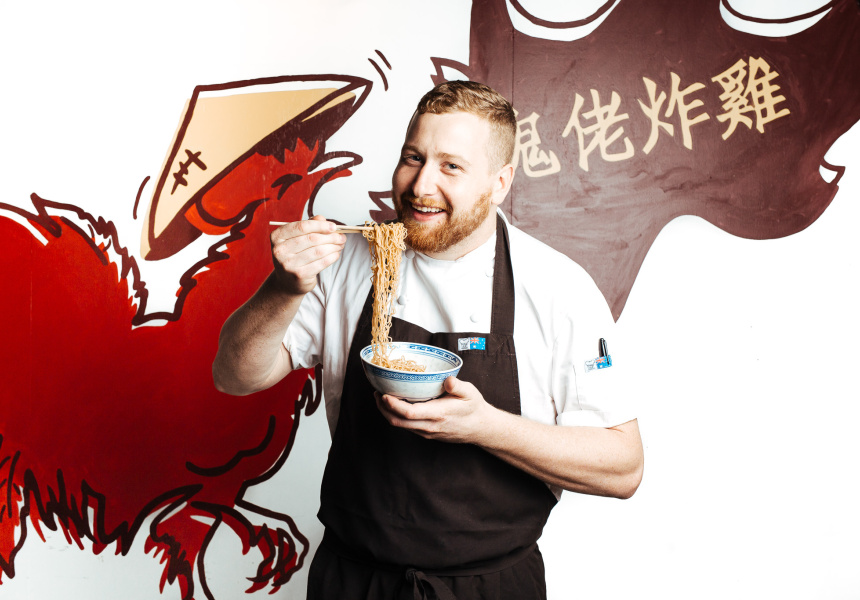 During March into Merivale, a pop-up by the head chef of Papi Chulo, Patrick Friesen proved to be very popular. The Work In Progress kitchen for Work In Progress @PatrickFriesen will stay open until further notice, giving diners who didn't have time in March a chance to try it.

Inspired by Friesen’s favourite late-night hangouts after a busy restaurant service, the pop-art-themed bar offers a menu of Asian fried chicken and Hong Kong-style noddles. “Who doesn’t like fried chicken and noodles?” asks the head chef, laughing. “I like to cook things that I like to eat. If I don’t like it, I don’t serve it. Like raw green capsicum,” he jokes.

Expect to try fried chilli chicken with peanuts; Phnom Penh wings with lime and white pepper; Sichuan duck; and tofu lo mein noodles on the menu. All chicken dishes will come with kimchi, pickled daikon and garlic cucumbers. But it’s the agedashi-ish tofu that sounds really unusual. “It’s like a cross between takoyaki and okonomiyaki,” he explains.

Friesen will be splitting his time between Papi Chulo and Work In Progress. “I think it’ll be nice to be back in the city cooking Asian food again. The beaches are nice, but sometimes you miss the city.”

There are cocktails like the Shaky Pete (Beefeater 24 gin, ginger and 150 lashes pale ale), Down the Stairs (Zubrowka, pressed apple, lemon and cinnamon) and Rapaska (Absolut Elyx, raspberry, passion fruit and apple) with beer and wine at the bar, too.