Paramount Coffee Project Ready for its Close-up in Hollywood

It’s even put a Vegemite milkshake on its menu. 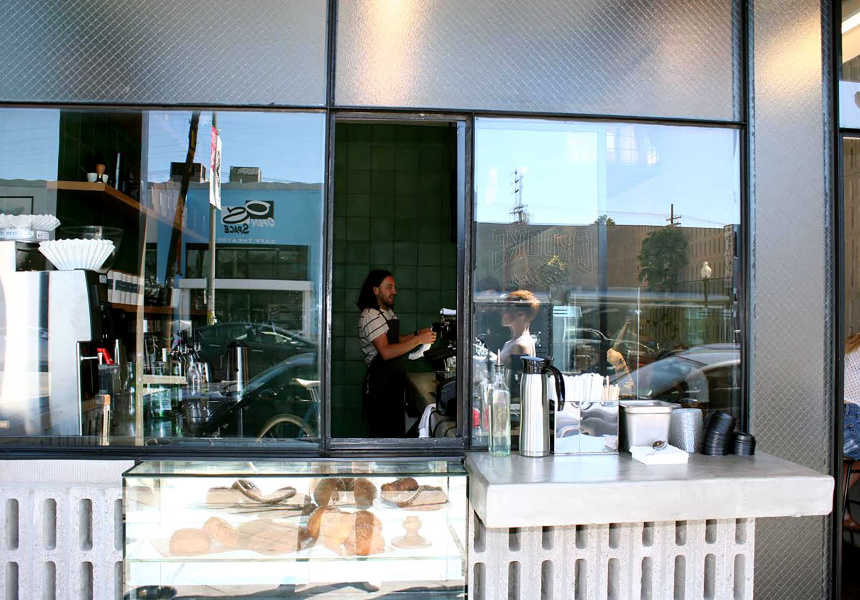 Paramount Coffee Project launched in Surry Hills in 2013, the fruits of a collaboration between four coffee-obsessed friends, Mark Dundon of Melbourne’s Seven Seeds, Russell Beard of Reuben Hills in Sydney, Melbourne Construction Company, Ficus and Jin Ng of Paramount House, also in Sydney. The group envisaged a space that would showcase a variety of styles and approaches to quality coffee, so it extended its offering to include regular, large-scale pop-ups, profiling roasters and baristas from all around the world.

Last weekend the Australian specialist-coffee purveyors went a step further, opening a high-concept cafe in Los Angeles. It’s a smart and slick-looking operation, across the road from the iconic Canter’s Deli on North Fairfax. Not bound by any one culture, PCP is a creative and collaborative environment. It offers something new, humble, approachable and interesting, utilising the varied strengths in Australian and American cafe culture.

Featuring top roasters from around the world, and the best that Australia and the US have to offer at breakfast, it’s got a lot to keep you coming back for. Espressos and flat whites are served side-by-side with fetco (filter) and Americanos. For opening weekend coffee was from either Australia’s Small Batch or Portland’s renowned Heart Roasters, all served in stylish Heath Ceramics. More into tea? San Francisco’s Song Tea, a specialty loose-leaf brand, who’s small-batch operation fits in just right alongside the coffee at PCP, provides a daily special.

There’s a comprehensive and very tasty all-day, sit-down menu from Will Majano, who’s spent time everywhere from Thomas Keller’s influential French Laundry to Petit Trois and Hollywood’s La Poubelle. Classics such as “avo on toast” and “scram” are available in addition to a lamington-stuffed French toast and a Vegemite and butterscotch shake that’ll rival any salted caramel in the city. There is also mescal-cured salmon, khao neow dam black sticky rice and frijoles y queso.

The team has created a thoughtful offering all the way through; from the signage and menu illustration created by We Buy Your Kids, to the fit-out designed by Sydney-based architect, Alana Cooke. There is also a considered retail shelf for those looking to take a little something home with them.

The space is long and narrow, bookended by an espresso machine and an open kitchen. There is lots of functional seating, plenty of natural light, hanging plants and a small courtyard space out the back. If you’re in a hurry, there’s a convenient takeaway window for ordering drinks and pastries to go.

This is not just a Pumpkin Spice-hating, flat-white touting, Australian-style cafe experience in the City of Angels. There’s an emphasis on the quality of the coffee, paying tribute to all the hard work it takes to get the coffee to the cup. Education and exploring coffee and cafes is the aim, so in addition to weekly cuppings and learning sessions, the team will include residencies, takeovers and events. These will include a series that invites multiple roasters to put their spin on a single lot of green beans.

Dundon, Beard, and Ng have built a clever, cross-cultural program that gives patrons an insight into how different producers approach and handle coffee. It showcases a creative-concept coffee experience, and lets its audience sample the best roasting styles and brew methods along the way. There’s an unwavering appreciation for the people, producers, roasters, farmers and brewers in the biz, and exceptional service from the staff members themselves. Go check it out next time you're in Hollywood.