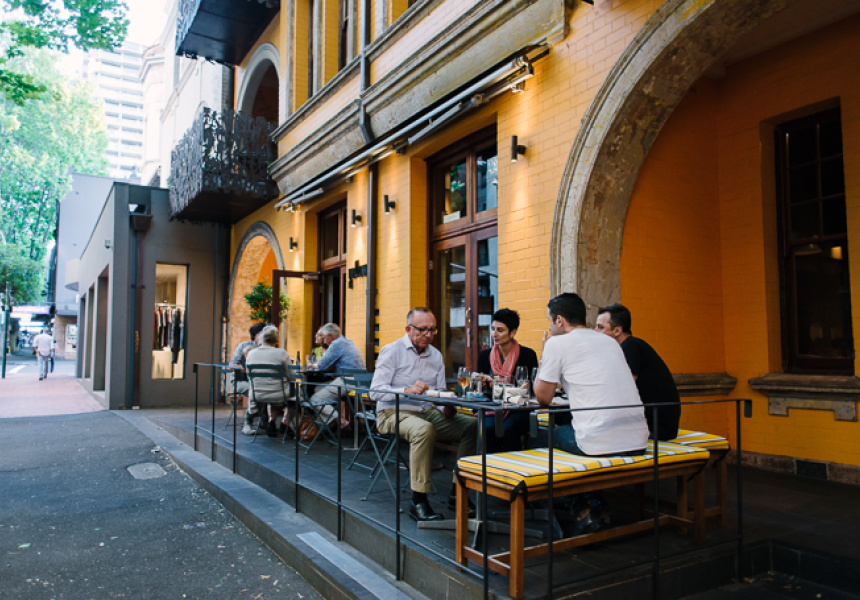 In the 1930s, a hungry Picasso traded brushstrokes for bread at La Colombe d’Or in the South of France. These days, though, diners feast their eyes on technicolour abstractions between eating lobster bisque and bites of foie gras in the same spot. Last year, London’s Pied a Tierre commissioned a series of artists to turn the Michelin-starred restaurant into a gallery space, creating everything from sculptures spun out of quail bones to paintings that unfold on porcelain plates. And when a modern-day bistro took shape inside Potts Point’s historic Yellow House, it was Sydney’s turn to reap the magic that’s sparked when good food collides with contemporary art.

“We’re really proud of the history behind Yellow House,” says Brent Savage, who established Yellow, an inventive restaurant that takes cues from French bistronomy, with sommelier Nick Hildebrandt in October last year. “It has a special place in the hearts of locals and they feel toward it a real sense of ownership.”

Although Yellow House – an elegant, mustard-coloured terrace designed by 19th- century architect Maurice Halligan and corseted by Roman arches and striking gables – has always been part of Macleay Street’s fabric, this sense of ownership stems from the way it marked Potts Point out as a nexus of creativity. The house, which once served as an exhibition space and haven for icons such as Robert Hughes, John Olsen and Robert Klippel, played host to a series of electrifying live art shows during the ’70s and helped to shape the careers of art stars such as Albie Thomas, Brett Whitely, Bruce Goold and Martin Sharp.

For Savage, who also operates white-hatted CBD eatery The Bentley and Monopole, a moody wine bar a few blocks down, Yellow presented an opportunity to create a restaurant that could serve as a neighbourhood focal point. It also afforded him the chance to experiment with bistronomy, a Parisian culinary movement that aimed to tackle elitism in the French dining world by serving up thoughtful food in a laid-back setting. “Nick and I felt that there was real need for a local bistro with a modern offering,” says Savage. “I was inspired by the trips that I’ve taken to Paris – I was driven to offer a market- driven menu that changes frequently and appeals to locals at an affordable price point.”

Savage might be onto something. At Yellow, dishes such as crisped-to-perfection pork belly topped with cavalo nero, Italy’s nod to kale, are a study in flavour and texture, while left-field creations such as tender lamb’s tongue crowned with raisins and puffed rice is a elegant and delicious tribute to Savage’s commitment to often-discarded cuts of meat. Here, the wine list includes a well-curated line up of small producers including South Australia’s Lucy Margeaux.

“I’m really passionate about using simple ingredients that have almost been forgotten about,” Savage explains. “Things like kohlrabi, which is a large type of radish, as well as secondary cuts. To me, that’s what a bistro is all about – using cuts you wouldn’t necessarily get the chance to taste. But we also try to mix it up with classic dishes using ingredients such as snapper and beef sirloin.”

Unsurprisingly, seasonality plays a starring role in Savage’s culinary mission while creating the sense of the unexpected that’s a legacy of the space.

“A lot of the menu is driven by what I see on a Saturday morning at Eveleigh Markets,” Savage says. “During the week I drive to the market and have a look around. We see new things every fortnight or so and jump on them.”

“We really want to keep people interested in what we serve and make sure that it’s surprising,” says Savage. “We’re well aware of the space’s history and conscious of what we’re doing with it. It’s really important that Yellow is part of the Potts Point community, somewhere that locals can enjoy at any time.”