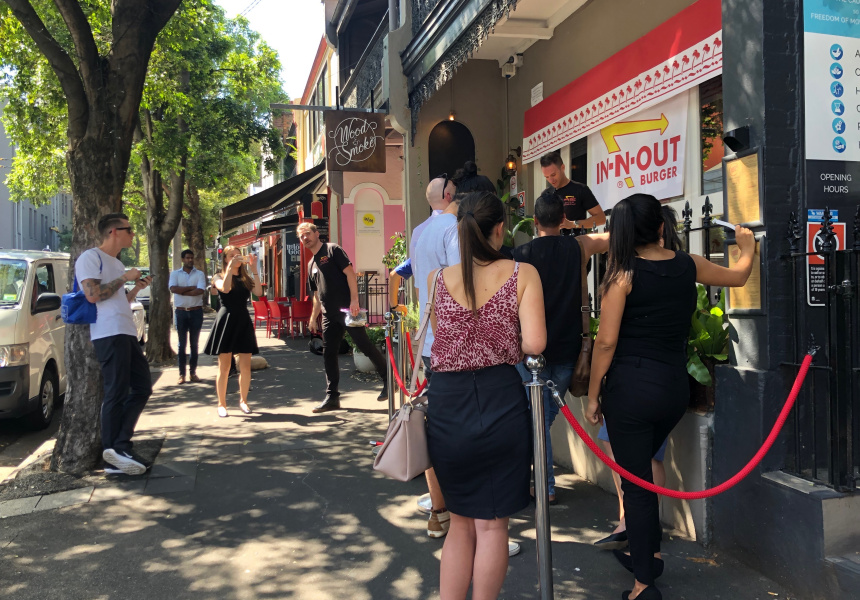 This morning in Darlinghurst, burger fans lined up – and continue to line up – to get their taste of American cult fast food chain In-N-Out. At 11am the line stretched for more than 100 metres from the pop-up location, a bar called Wood and Smoke on Stanley Street, around the corner onto Riley Street. Wristbands were handed out for crowd control.

The queue didn’t seem to be as long as queues at previous In-N-Out Sydney pop-ups (there have been three others, at Love Tilly Devine, Dead Ringer and Parramatta Mixology Lounge), although punters still waited for more than half an hour to get served.

Burger bloggers Scott Gordon and Jesse Freeman were both wearing their best burger socks and were placed towards the end of the line when Broadsheet arrived. They had been in line for 15 minutes, and when we asked how long they were prepared to queue they said they’d happily wait for 30 to 45 minutes.

“I haven’t actually tried them before,” says Gordon, who runs The Wolf of Eat Street Instagram account. “There’s a lot of hype around it, so it’s worth trying.”

“For our Instagram engagement, it’s worth lining up,” says Freeman, of Food Coma Eats. “It’s a recognisable product.”

Inside, the bar has been decked out with the fast food outlet’s traditional red, yellow and white branding. The compact menu features just three burgers: the double-double (double meat and double cheese), a cheeseburger and a hamburger. Punters have the choice of adding grilled onions, mustard, extra Thousand Island dressing and pickles to make their burgers “animal style”, or replacing the bun with lettuce for a “protein-style” burger.

Fries, Coke and Diet Coke are also on the menu; pricepoints for all items reflect American pricing. That means between $3 to $5 for a burger, $1 to $2 for fries, $1 for drinks and T-shirts for $4.

“I’m thinking [I’ll get] a couple of the double-double burgers,” says Freeman.

(Unfortunately that won’t be possible – In-N-Out has confirmed a limit of one burger per customer.) And, given they’re burger aficionados, we couldn’t help but ask them: what makes a good burger?

“I think a lot of it for me is the whole balance of it all,” says Freeman. “I think if you’ve got a really flavoursome crust on the outside of the beef, where they’ve really heated it up to a high level and caramelised the fat, that crunch is one of the best things in a burger.

“And I think a good cheese melt; if the cheese isn’t melted it’s a weird texture. You’ve got to have the right flavours, even just a classic mustard and ketchup with a bun and cheese and meat is one of the best burgers you can have. It’s just about the whole experience together.”

The In-N-Out pop-up is at 77 Stanley Street, Darlinghurst from 11am to 3pm today (or until sold out).

Like burgers? Here are some of our Sydney favourites.