Opening This Week: Avi’s Kantini, a Middle Eastern-Inspired Eatery Inside Newtown’s the Bank

It’s got drinks by Acme co-founder Ed Loveday, and dishes that flirt with the various cuisines of the Mediterranean and the Middle East, including gooey saganaki cheese with honey, pita stuffed with fried chicken, and chickpea falafels. 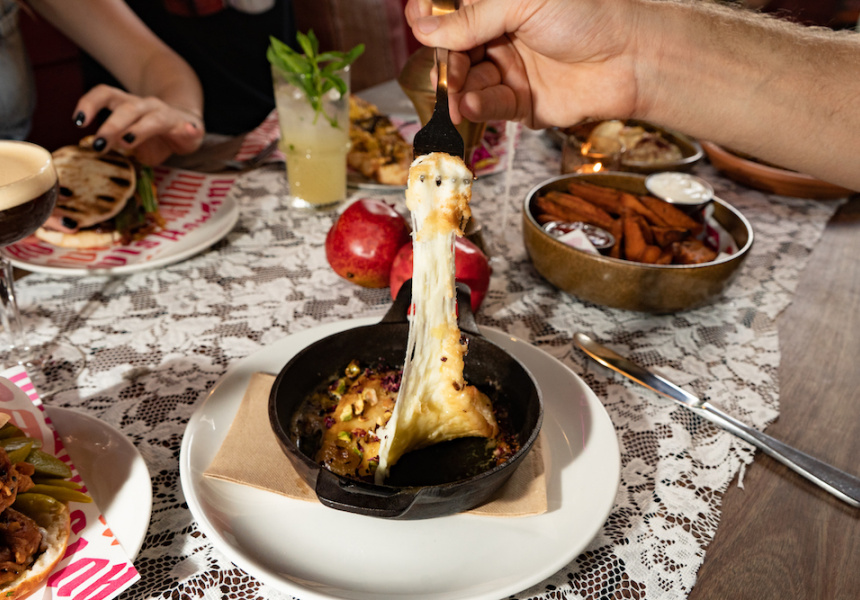 Newtown pub The Bank is many things to many people – a beer bar, live music venue and perfect Sunday-afternoon drinking spot. And from this Thursday May 6, the Solotel-owned venue will also become a dining destination with the launch of Avi’s Kantini, a Middle Eastern-inspired diner – with drinks by Acme co-founder Ed Loveday – in the pub’s leafy courtyard. (The menu will be available anywhere in the three-level boozer.)

Avi’s incorporates flavours from the varied cuisines of the Medditeranean and Middle East into a range of large and small dishes. The meze menu includes dishes such as gooey baked saganaki cheese with honey, pistachio and rose; a spicy Turkish-style lamb flatbread with baba ganoush; and chickpea falafel with muhammara (hot capsicum dip).

“Middle Eastern and Turkish food has always been popular in Newtown, and the Avi’s concept is building on that legacy and love in a great outdoor space at The Bank,” Solotel CEO Elliot Solomon tells Broadsheet. “The great thing about the menu is that it works really well as a group shared feasting experience, but can easily adapt to a quick pint and pide or pita if you’re dropping in for a casual bite. There’s also options for a range of eaters – vegetarian, flexitarian, pescatarian, vegan.”

“We wanted to take people on a little journey around the outskirts of Europe and so had a lot of fun playing with distinct flavours from the region like arak, sumac, pomegranate, saffron and bergamot, that really help to dial up the food flavours,” Loveday tells Broadsheet. “Sumac is [an] ingredient that you don’t see used all that often, but it can add a really mouth-watering quality.”

The courtyard has been overhauled to channel psychedelic ’60s and ’70s vibes, with an enormous, vibrant mural by sign-writing company El Oso Negro popping against the pastels and tans of the refreshed bar and seating.

Avis Kantini opens May 6 at The Bank, Newtown.