Built in a former bottle-shop drive-through. 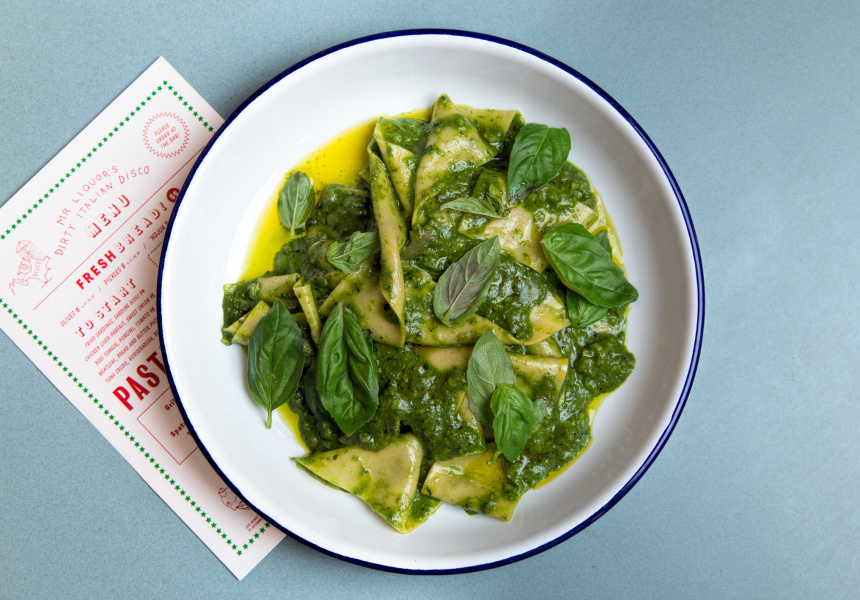 We’ll excuse you for never having heard of the Tennyson Hotel. It’s one of those locals-only pubs; commercial tap beers, $10 specials, dull purple carpets. Pretty unremarkable. Its drive-through bottle shop is now home to one of Sydney’s bravest and most inventive venues, Mr Liquor's Dirty Italian Disco.

Essentially, it’s an Italian restaurant. But what makes it different and fun is how it’s been put together. At 6pm every day the roller doors open to a set of 96 seats strewn across the road where cars would usually drive through. On one side there’s a huge mural of cartoons by tattooist Rick Vaughn, and on the other there’s a chequered dance floor, karaoke, a cocktail bar, a bottle shop curated by Franck Moreau and a wood-fired oven and grill run by the Pinbone team. You’ll be hearing ,’90s R’n’B, trap and a lot of disco and funk from speakers, which were recently extracted from Tank Nightclub. How many venues do you know that feel as much like a night club as they do an old-school Italian joint?

“The whole idea is around just having a good time. Justin [Hemmes, Merivale’s CEO] just wants everyone to have a party, and he throws pretty good parties,” says Mike Eggert, one-third of the Pinbone team along with Berri Eggert and Jemma Whiteman. Eggert says it was inspired by old-school American-Italian diners. “When we saw this, we thought it was really Roberta’s, really grungy New York,” he says.

Rather than directly copy the cheese-drenched pizza and meatballs template, there are two house-made pastas (the opening menu has a pesto-style green ragu over pappardelle, and mini gnocchi with braised lamb and rosemary); four grilled meats (a one-kilogram rib eye finished in the wood-fired oven and a full spatchcock, lemony and buttered up); and a handful of bar snacks, including a classic chicken-liver parfait, wood-fired ciabatta, handmade ‘nduja and four bruschettas.

Before you eat, walk through the remnants of the drive through, now a walk-through wine store, and choose what you’ll be sipping for the night or taking home afterwards. “This is literally one of the best wine lists in Sydney and it's not even written down … you just walk in like a bottle shop,” says Eggert. If you’re staying until late, opt for a jug of Negroni or a late-night Sgroppino with lemon sorbet and prosecco.

Technically, this is a pop-up, but there’s certainly a feeling that if this goes off, it’ll be around for longer than six months.