One of the World’s Best Bartenders Has Opened Scout, a Bar You Need a Code to Get Into

Drinks are created in a lab, fermentation is a big deal and the wine is made with banana. 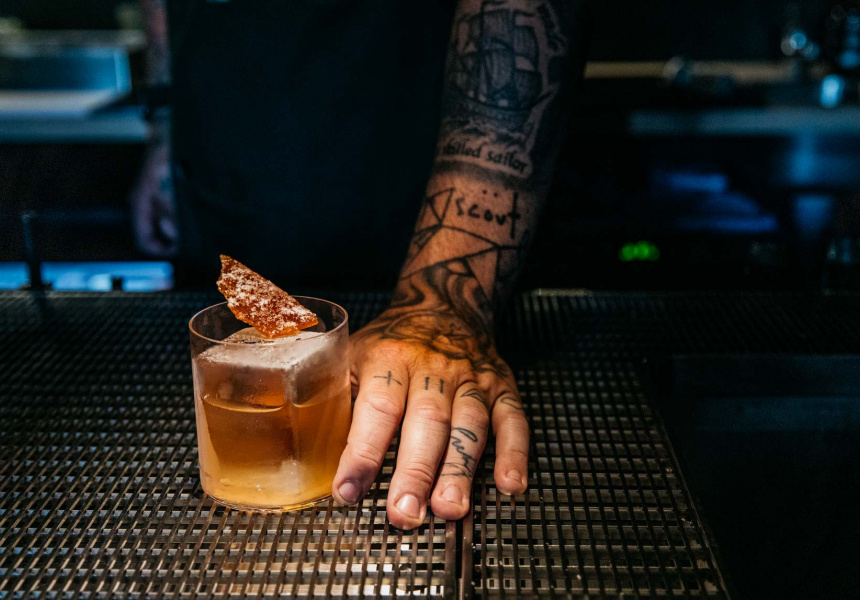 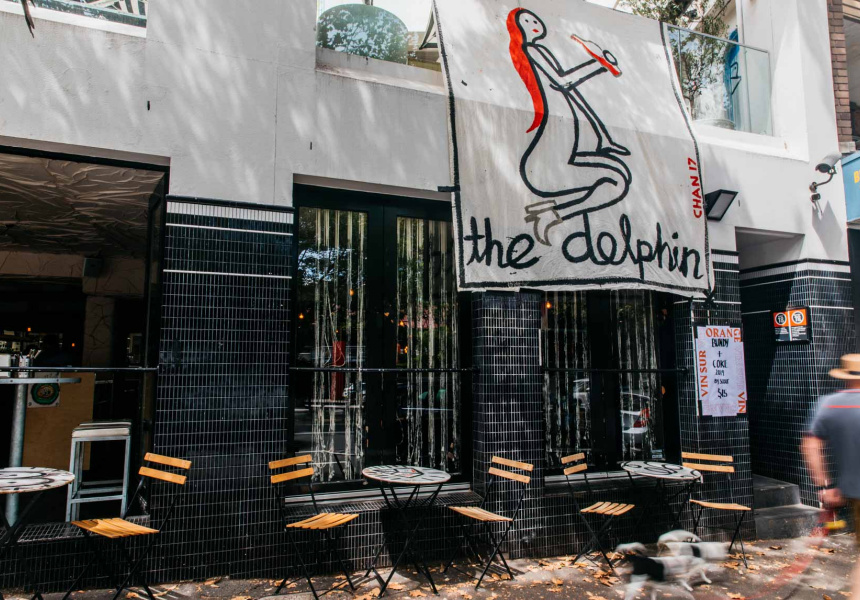 When Broadsheet visited Scout bar in the lead up to its opening, we found the bar-in-progress missing the door which opens to the steep flight of stairs that leads to the top floor of The Dolphin Hotel. It’s since been installed and has a keypad where punters enter a code sent to them when they book (the bar downstairs will tell walk-ins what it is). But this little bit of drama doesn’t have a patch on the magic going on behind the bar.

Scout is from the creative mind of Matt Whiley, whose Scout bar in London currently ranks at number 28 on the World’s Best Bars list. Whiley is known for a mad-scientist approach to drinks; Scout London’s basement is a lab, and he’s also installed one in The Dolphin, though, “it’s not as big as the one we’ve got in London”, he tells Broadsheet. “We’ll try and move into a bigger space once we figure out [how to] steal some space from Maurice [Terzini, The Dolphin’s owner].”

His lab is serious stuff. It’s stocked with the sort of equipment usually used by those in lab coats with “Dr” before their names: there’s a centrifuge “to separate solids out of liquids”, and an evaporator Whiley uses for distillation, which he says leads to a fresher, cleaner flavour. For example, he ferments bananas, watermelon and citrus to make wine, and distils peaches to make gin.

Whiley’s been teaching himself how to use these machines since 2011 – “it’s easier now to look stuff up online than it was back then”. But that’s not to say a visit to Scout will be akin to a science lesson. “We do the science-y stuff and want people to have fun and enjoy it,” he says. “If someone’s interested, we’ll geek out with them for as long as they want, but we focus on people having a good time.”

Despite the geekery, Whiley’s attention is on the ingredients he uses to make his drinks, not the fancy gear. “We always start with an ingredient because we’re a produce-led cocktail bar, rather than spirit-focused,” he says. “We generally use vodka for distillation because it’s a neutral spirit. We start with the produce, analyse the flavour profile and then do research … and go back from there. We look at the compounds in the produce and try to match the compounds.”

At Scout Sydney, those ingredients include native wax leaf foraged in Marrickville, pepper berry, lemon myrtle and geranium, which he uses to perfume drinks. But don’t go thinking it’s tokenistic.

“I’ve been conscious of not arriving into the country and going crazy with native stuff, because I want to understand it a bit better first, but it’s definitely an Australian menu. It was 100 per cent the intention to make it Australian – we don’t use produce from outside the border in our UK Scout either – the border in Australia, is much bigger, though. Australia grows pretty much everything.”

That means that alongside the native ingredients he’s making the most of produce that may seem mundane to Australians but is exciting to someone from a place where parsnips and sprouts are more common than tropical fruits.

The Hall Street Fizz is made with matcha green tea rum, lychee, fermented oats and coconut oil; the Haymarket with a spicy-sounding combo of vodka, ginger, chilli, Thai basil, lime leaf, lemongrass and lime; and a vodka soda with strawberry gum vodka and green ant soda, which has been brewed in collaboration with local bar PS40. He tells Broadsheet they’re some of the best drinks he’s ever made.

The drinks list changes regularly, depending not only on seasons, but on how much of each they can realistically make.

“If something’s popular, we’ll run out very quickly,” Whiley says. “We’ve got seven litres of wax flower drink and once that’s gone we don’t get more wax flowers till the next season. It will evolve and change. Part of our job is to plan, to have the next drink.”

Whiley has made sure to keep wine drinkers happy too. Western Australian winemaker Ben Gould will be one of the suppliers, and Scout is also calling in orange wine from South Australia.

In London, the bar is highly regarded for its food, which often uses produce left over from the drinks-making process. Whiley is working with Monty Koludrovic (The Dolphin, Icebergs) on a menu he says will change as they get settled in. At the moment it includes celery blue cheese with smoked almond, peach with tomato and lemon balm, and chicken Waldorf finger sandwiches.

Whiley says the space is the “complete opposite” of London. His UK bar is bright and airy, with plenty of light woods and Scandi minimalism to compensate for the gloom outside; his Sydney venue is all about contrasting with the sunshine. Designed by his wife, it’s all dark timbers, forest greens and trees spread throughout to create nooks and crannies to hide in.

Despite the imaginative drinks and ultra-intense method, Whiley says he isn’t here to change the Sydney bar game or fill a hole.

“We just want to come and join in with a slightly different approach to making drinks. We’re not here to change perceptions, it’s about having the confidence and the delivery of how we do things in London.”

This article first appeared on Broadsheet on March 1, 2019. Menu items may have changed since publication.