The fifth storey open-air bar has prime views of Darlinghurst and the CBD, a respectable natural-wine list and a hefty schnitty. The Burdekin Hotel is best known as a destination for after-hours techno raves and queer club nights. A pub has presided over the corner of Oxford and Liverpool Streets since the 1880s, with the current art-deco establishment constructed as early as 1917. But little did we know, the enormous, five-storey pub has been guarding a lucrative rooftop space for more than 100 years.

The sky-high reveal came as The Burdekin was granted approval to open the rooftop to the public after lockout laws were repealed in January 2020, and the area finally opened this summer. Exit the elevator to find a laid-back space that plays on the historically fun and all-inclusive nature of the pub. Hand-built timber booths and rustic-chic white stools populate the open-air terrace, which retains its industrial concrete exterior. One side of the small, roller-doored bar has optimum views of Darlinghurst and Kings Cross, while the other looks across the CBD.

General manager Aran Tanaka Van de Ven says the bar embodies an “all-encompassing, unpretentious atmosphere … we like to create a space for all different pockets of the community”, including Sydney’s LBGTQIA+ community, music fans (from emo to electronic), and the casual after-work crowd.

As for the wine, there’s natural, organic and vegan Australian drops aplenty, as well as French champagne and Italian pét-nat. The house tap beers – nicknamed Burdie’s Refreshing Ale and Pale Ale – are made in collaboration with Marrickville’s Stockade Brew Co, and there are two other craft beers on rotation. Better yet, happy hour beer, wine and spirits – served from 4pm to 6pm on weekdays – will only set you back $5.

The pub’s food menu has been revamped too, with a focus on modern pub classics with an Italian-ish touch. Snacks include cheese and charcuterie boards with gorgonzola and fennel salami; truffle and porcini arancini; and creamy burrata. Pizzas come on crisp house-made bases. And of course there’s the pub staple, the schnitty, which comes in both chicken and portobello mushroom versions for good measure.

Since operations were taken over by Adam Celestino (St Jude, Angry Tony’s Pizza) five years ago, the venue has gradually evolved from its party-only reputation, thanks to the addition of more live bands and collaborations with the likes of electronic party hosts Something Else, and frequent AM/PM Emo Nights. The rooftop will eventually also host live DJs and acoustic sets.

“The music that we offer is an essential part of who we are as a venue, as well as Sydney’s nightlife,” says Tanaka Van de Ven. “Music has always been a big part of the pub lifestyle, so we’re trying to put on gigs as safely as possible but as regularly as possible.” 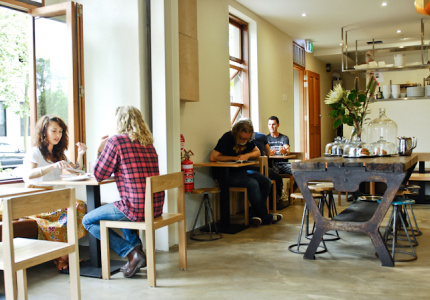