An Oasis in the CBD

As Sydneysiders continue to hone their tastes for great food and coffee, CBD cafes are rising to the challenge. Times are changing in Sydney’s CBD; cafes you’d go out of your way to visit are popping up left and right, following in the footsteps of their suburban and inner-city counterparts. The city’s always had great restaurants but you don’t just bump into good coffee.

Cross Eatery is the lobby cafe in Clarence Street’s heritage Red Cross building. After years as the barista at Mecca, Marcelo Soto decided to start something of his own that would reach beyond the tired coffee spots squeezed into tiny spaces scattered around the city. Although he’s not the first to open the kind of cafe that puts that extra bit of thought in to the quality and creativity of its offering, it is still a welcome oasis among the (decreasing number of) bland cafe options.

“People wander in because it’s such a big open space,” says Soto, something he’s been witnessing since the moment the doors opened. The bright open lobby is a stark contrast to the standard hole-in-the wall coffee windows in the area.

The menu is all seasonal and locally sourced; many ingredients come from friends Soto has made through the hospitality business, such as the gluten-free bread from Nonni’s Fine Food and meats from Feather and Bone.

The chalk-board menu is full of fresh combinations such as a ciabatta roll stuffed with Maffra cheddar, ricotta, cauliflower and zucchini pickles, or bio-dynamic lamb kofta served with spicy tomato salsa alongside two salads of your choice. Breakfast ranges from grab-and-go Brickfields sourdough toast to heartier dine-in options such as baked eggs with pine mushrooms cooked in garlic butter with kale, labneh and manchego. There is even an all-day breakfast salad of probiotic cabbage, kale and topped with a poached egg.

Beyond the menu, Soto is taking his passion for great produce one step further. Everything used in the cafe is easily traceable back to their producers, and he hopes to share those stories with customers through photographs in the lobby.

“Once the cafe is settled,” Soto says, “we want to bring the connection to the farmers back to the city and use this space to tell their stories.” 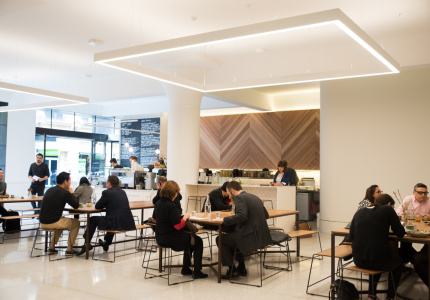