Nutie Opens a Dessert Bar in the CBD Nutie Donuts, Balmain’s vegan-doughnut specialist, has opened its second outpost in the CBD in the Hunter Arcade. All of the sweets on the menu are vegetarian and gluten-free, and everything is baked in-house daily.

Self-taught baker Sina Klug and her business partner Jacques Dumont can be seen in-store baking doughnuts and running the business daily – a promising sign of quality. Together they’ve developed allergy-friendly and vegan treats, which originally found success at the Bondi Farmers Market.

“We used to stay up all night trying to create our doughnut recipe. So many batches ended up in the bin,” says Klug, laughing.

Many of Klug’s creations came about by accident. The popularity of Nutie’s cookie-monster doughnut was a result of an afternoon messing about in the kitchen. “I was bored … I was playing around, and I posted this photo of (what I thought was) a boring blue doughnut. That afternoon I was flooded with overwhelming orders.”

“Gluten-free baking can be incredibly complicated until you find out which nuts, flours and starches react which way,” says Klug. Substitute ingredients include almond meal and almond milk (which is made in-house), while cookies are made with chickpea flour, and brownies with black beans.

“One of our biggest challenges is tasting as good as the original,” says Klug. “We don’t settle for second best.” Success is measured by its demand, with 12 cafes in Sydney currently stocking fresh goods from the Balmain store.

“Even though we are growing bigger, quality always comes first for us.”

This article first appeared on Broadsheet on June 1, 2018. Menu items may have changed since publication. 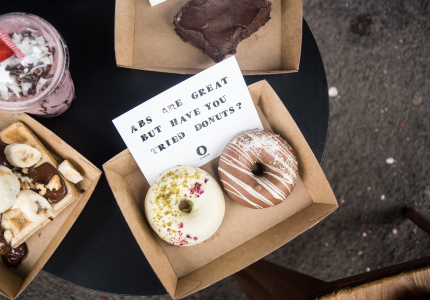