This Surry Hills diner is channelling typical kebab joints but with a few improvements. Everything’s made in-house, there's booze, fancy instant coffee and not a fluorescent light to be seen. 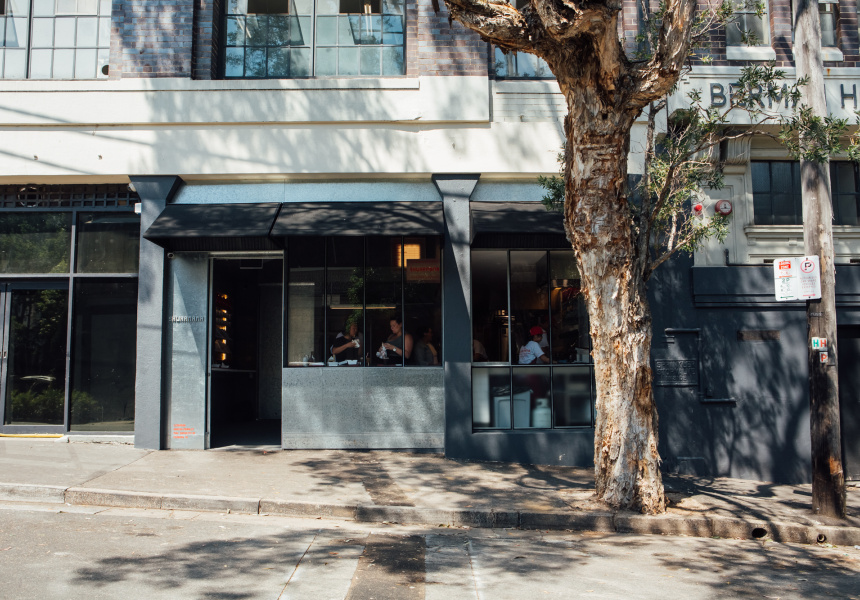 About a year ago, Russell Beard of Paramount Coffee Project and Reuben Hills asked chef Mat Lindsay if he had any ideas for a space Beard had acquired on Commonwealth Street in Surry Hills. Lindsay said he did: a shawarma. He probably could have said anything at that moment – meat-flavoured soft serve, curry-spiced ice-cream or just asparagus – and Beard would have said yes. Lindsay, the owner of Ester and Poly, is one of the best chefs in Sydney.

Lindsay told us in June the idea for a Middle Eastern kebab shop was a bit of a joke, partly inspired by Ester’s brief phase of serving “shawarma-style things” for Sunday lunch. Joke it might have been, but Shwarmama is now a reality and is serving delicious, firmly wrapped bundles of goodness.

Hardly anyone walking past is going to assume it’s a kebab shop, though. Think of the hallmarks of a kebabery – fluorescent lights, a glass display cabinet stocked with sauces and salad bits, a fridge full of soft drinks and cheap furniture for the few who eat in – Shwarmama has none of that.

Instead, you’re greeted by a shopfront of galvanised steel (a reference to the heritage buildings in the area) with glass windows that show off what’s happening inside. There’s an instant coffee machine (that uses Paramount Coffee, Reuben Hills and Seven Seeds beans), a bar without stools (the idea is it’s a place to stand around), and a few shelves set into a polished concrete wall stocked with red and white merch (caps, T-shirts, mugs, bandanas). Behind the counter three staff members are shaving off the spiced rotisserie chicken, making kebabs and serving punters. It's tiny – exactly like a kebab shop.

“I guess it’s a little like a swimming pool with all the rendered finish,” Beard says about the Anthony Gill design (who worked on Ester and Poly). “It’s only small, it needed to be a space that would be comfortable to wait, have a takeaway component. It needed to have good efficiency and an aesthetic we all like. It’s pretty pared-back.”

The six-item menu is listed on a single, neon-lit box. There’s the Shawarma (spiced rotisserie chicken stuffed in a toasted flatbread with tahini, hummus, harissa, cucumber, onions and pickles); the Falafel Pita pocket (chickpea-based falafel with the extras as above); the Sabich (a sandwich with boiled egg and eggplant, lathered with tahini and hummus); a Hummus Plate (hummus, chickpeas, tahini, pickles and pita); and a salted chocolate-chip cookie. In addition to the coffee, there’s beer (Wildflower’s Good as Gold is on tap) and two vinos (currently a local fiano and a Victorian nebbiolo).

Considering the names attached to the venue, none of the food is particularly cheffy. The chicken roasting and spinning behind the counter (boneless Marylands stacked on top of each other) might be heavily spiced and herby, but these aren’t kebabs made with koji ferments, uni or dry-aged meat. They’re just good-quality kebabs, under $16, made in-house and simply.

This article first appeared on Broadsheet on October 29, 2019. Menu items may have changed since publication. 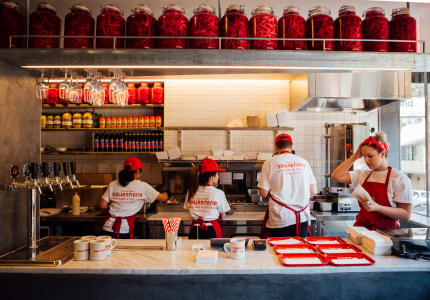