The handsome space has 26 tapped beers, as well as cocktails on tap, a well-priced wine list and a menu of pub classics – including “secret” pasta. For more than 100 years until 1990, 106 George Street in Redfern was home to a neighbourhood pub. Since then, the building has seen other bars come and go, and during the ’90s it served as a retail space. (Most recently it was home to a Domino’s Pizza.) But when W Short Hospitality (The Glenmore, The Australian Heritage Hotel and The Tudor Hotel) purchased the corner building about five years ago, it had grand plans to restore it to its original form.

“We bought it with a view to transform it back into a pub, but we knew that we needed to do that in stages,” W Short Hospitality CEO Jen Russell tells Broadsheet.

The first stage of the restoration project was the 2017 opening of retro-inspired favourite Misfits, on the building’s top floor. Now, the team has opened The Redfern, a warm and casual street-level public bar. Russell describes it as the “bigger brother or sister” of the upstairs cocktail restaurant and bar.

The exterior has also had a facelift, with teal-coloured tiles and stained-timber window frames, while the inside shows off the history of the building with its exposed brickwork and timber beams. It’s also been fitted with all the trappings you want from your local boozer: a selection of low and high seating, TVs airing live sports, plus a well-stocked bar with a mix of 26 mainstream and craft beers on tap, and a quality, well-priced wine list (most bottles sit around the $50 mark). There’s also a small selection of cocktails on tap.

You can still access Misfits directly from outside the building; otherwise, Russell’s suggestion is to “come downstairs to enjoy a couple of drinks, and if you feel like having a more sit-down table service experience you can head upstairs” via one of two staircases located in The Redfern.

On the food front, expect the same menu as upstairs at Misfits – the two share a kitchen. The only difference is there’s no table service in the public bar; in true pub form, all orders are made at the bar.

Expect pub classics, such as a chicken parmi and Scotch fillet, alongside a selection of burgers and pasta dishes, including a “secret” pasta that changes weekly. For those after something lighter, the kitchen will happily swap out pasta for zucchini noodles and burger buns for lettuce cups. And be sure to leave room for some pie served by the slice. 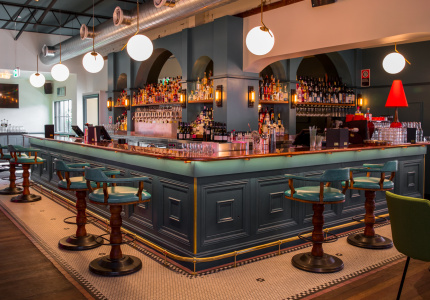