And the plants hanging from the ceiling are for sale. 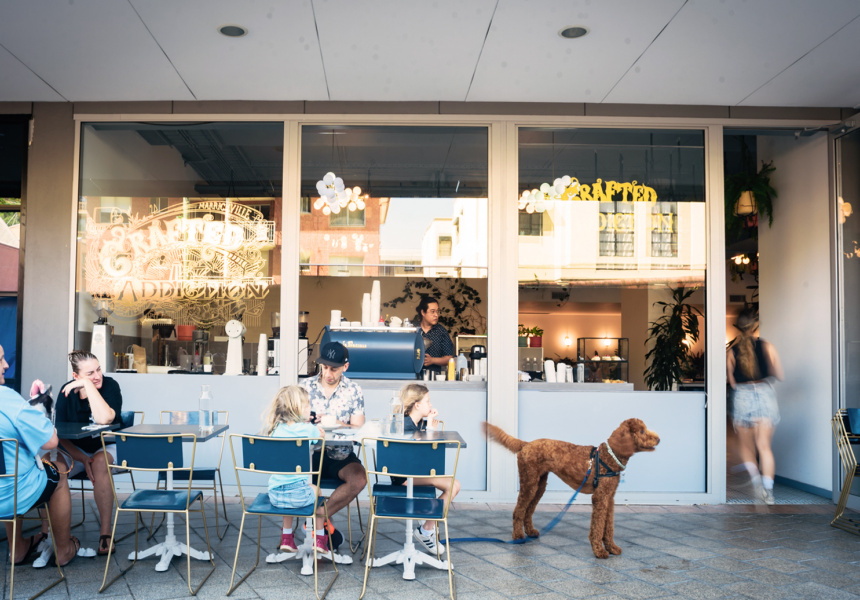 There are traces of Yianni Papaioannou’s Filipino heritage all over the menu at Crafted Addiction: the bananas caramelised to the max for the milkshakes, and also the warm, comforting ginataan-inspired coconut-milk rice pudding topped with lychees. His Greek heritage is represented too, in the elaborate saganaki prawns and the flaky filo-pastry scrolls filled with the perfect balance of caramelised onion, olives and vegan cheese.

The cafe feels like a microcosm of today’s Marrickville. It’s multicultural and has a neighbourly feel – with the addition of excellent coffee and creative but familiar food. There’s even a spot out front for Marrickville’s new guard of toddlers and dogs to muck about.

The venue is on the ground floor of a new block of units near Marrickville station but inside, between the navy, white and gold tessellated tiles and light fixtures that echo those on the high street outside, it has the warmth of a place that’s been here for years. Next to the cafe is a wall that blocks the noisy Illawarra Road traffic, and passers-by, catching a glimpse of the cafe’s plants (which are for sale) and its white cockatoo mural, crane their necks and even jump to see what’s there.

When Papaioannou was growing up in Greece, his Filipina mum did the food for a number of local cafes. “She was always mixing it up, cooking adobo chicken with baked potatoes, adding five spice to Greek kokkinisto [red lentil and tomato] stew. She’d make chicken wings stuffed with Greek sausages for local businesses, and we five kids used to gather around the table to help debone the wings. Our household was fusion; food was fusion.”

Papaioannou has taken the same approach here, and will eventually incorporate more of his mum’s dishes. For now he’s focusing on editing what he admits is an unwieldy number of ideas. “I love testing and pushing my limits with food or drink. We started the milkshake menu with 20 shakes; we whittled that down to six, and now just three are on the menu,” he says.

The strongest dishes are the simple ones, such as the fried-chicken burger. The tender meat is marinated in yeeros spice (often used to flavour kebab meat) and yoghurt, which when breadcrumbed and fried makes a substantial, crunchy batter. In a tribute to Marrickville’s Vietnamese heritage, instead of pickles, the burger has banh mi-style pickled carrots and cucumbers.

Papaioannou has long dreamed of opening his own place, and the cafe has the blessing of his number-one fan. “My mum is so enthusiastic,” he says. “She nearly cried when she saw the place. She’s always told me not to get into something just for the money; she said I should do what I love.”

This article first appeared on Broadsheet on November 19, 2018. Menu items may have changed since publication.