The super-popular restaurant from Melbourne and NYC lands in Surry Hills. It’s serving naan pizza and butter chicken without the butter, and there’s a help-your-self bar fridge. 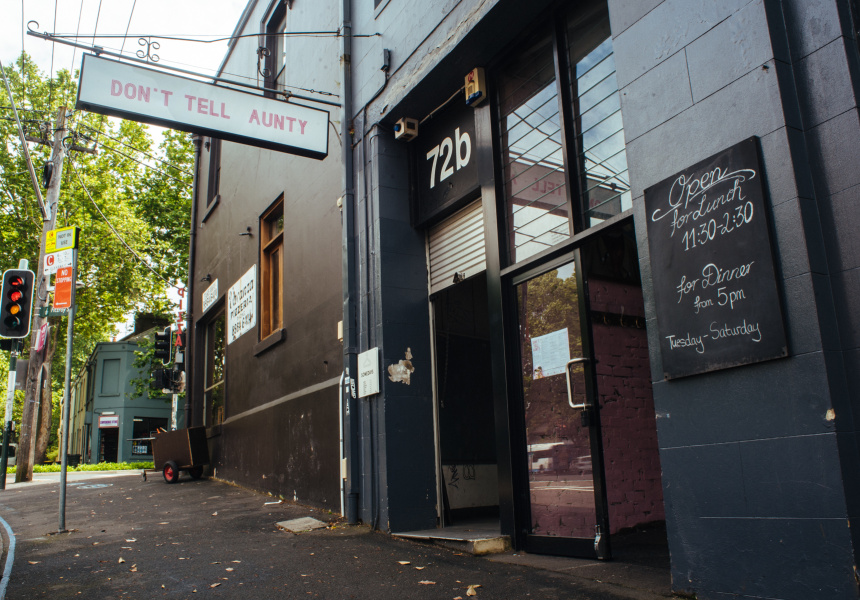 At Jessi Singh’s Surry Hills restaurant Don’t Tell Aunty, the chef is channelling the kitsch and kooky style preferred by his mother and many aunts. The inner-city venue has a higher-than-usual representation of peacock-blue velvet compared with your average Sydney restaurant – it’s there on the long banquets and cushions – which clash endearingly with the polished-brass dining chairs. It seems his aunties also love gold, copper and sherbet-pink walls, which is what, during service, Bollywood movies are projected onto.

Most chefs usually assign paint-swatch responsibilities to a third party, but Singh was more than happy to design the space himself. “A lot of chefs miss out on this part; this is what I love to do,” he says.

When Broadsheet first revealed Singh’s plans to open Don’t Tell Aunty in Colin Fassnidge’s former 4Fourteen space, Singh said his restaurant would share the atmosphere of his other mod-Indian restaurants: Melbourne’s Horn Please (where he’s consultant and executive chef), and the original Babu Ji in St Kilda; the Babu Ji he has also opened in New York; and Bibi Ji in Santa Barbara, California.

When he was growing up the restaurant scene in India was virtually non-existent he says. Meals were eaten at home, or in extended families’ dining rooms. Singh says what is served in many eateries in the United Kingdom (where there is a thriving Indian community), and what diners are generally accustomed to, is actually British-Indian fare.

So, what of Sydney-Indian food? It’s even more complex, he says, considering the city’s international dining scene and access to high-quality seafood.

The latter inspired his uni [sea urchin] biryani – a mixed-rice dish made with dates, turmeric, shallots, ginger and topped with salmon roe and uni “tongues”, the fleshy, sac-like parts of the sea urchin. He cooks the rice in sea-urchin juice and sea-urchin bladder. “It’s the most flavourful part … a lot of places only want to use the tongue, but we buy whole sea urchin,” he says. “Australia has the best sea urchins.”

He also pays homage to India’s well-loved “fusion” street food. The Colonel Tso cauliflower is a play on the Sino-American dish General Tso chicken, which you find in North American Chinese restaurants. This is his version of gobi Manchurian, an Indian-Chinese dish found in Kolkata, a city with a large Chinese community. The cauliflower is deep-fried using a top-secret frying technique that results in super-crisp florets. It’s then served with a smooth Manchurian sauce of tomato, ginger, garlic and chilli.

He tips his hat to his homeland’s popular Indian-Italian cuisine with a naan pizza. He takes a thin pizza base, spreads on spiced tomato sauce and tops it with fontina cheese and green-mango pickle-butter. “I did this at Babu Ji [in New York] because pizza is a big deal there,” says Singh.

And the quintessential butter chicken? It’s a dish Singh is most proud of. He cooks the curry sans butter, ghee and oil yet it has a butter-y flavour, which is achieved through judicious use of dried fenugreek leaves and seeds.

As for drinks, there’s a self-serve beer fridge and wine shelf, which is a reference to the “very much Australian” habit of dropping off a six-pack at a friend’s dinner party, and then helping yourself to drinks throughout the night. The wine list – compiled by sommelier Rajat Parr – features some $100-plus bottles. Singh says the stuffed blue peacock, installed above the shelf, keeps a watchful eye on any dishonest diners.

This article first appeared on Broadsheet on October 22, 2018. Menu items may have changed since publication.