Flavours run the gamut from salted caramel to black-sesame custard to Japanese curry. The texture of Comeco Foods’ sourdough doughnut is its own category. It’s not a light-as-air convenience-store number, nor does it resemble the hefty fresh doughnuts from Donut Papi, Shortstop or Grumpy Donuts. Made with brown-rice sourdough starter, Comeco’s doughnuts are satisfyingly chewy and slightly tart.

“Our sourdoughnuts don’t have a fluffy texture. They’re crispy outside with a slightly chewy crumb,” co-owner Yu Ozone tells Broadsheet.

Ozone and her husband Masa Haga started Comeco in 2017, running stalls at Marrickville Organic Markets and the monthly Sydney Vegan Market at Moore Park. In May, they opened a shop on Newtown's King Street with large windows, simple timber benches and a couple tables. Instead of being shown off in a conventional display case, proved doughnuts sit in stacked plastic tubs in the open kitchen awaiting the fryer. Rice-flour doughnuts don’t have a long shelf life, so the team fries them to order.

The process of making the doughnuts is also unconventional. It begins with the sourdough starter that’s fed with freshly ground organic brown rice. “Altogether it takes three days to ferment,” Haga says. “We mix the flour and starter with oil, do two fermentations and then shape the doughnuts.”

Some flavours, such as stewed apples or Japanese vegan curry, are filled before frying. “It’s the same technique as traditional mochi,” says Haga. “We make the dough a bit flat, put filling in the middle and then wrap the sides up and roll it into a ball.”

Other flavours, such as passionfruit custard, are filled with a piping bag after frying. Comeco’s menu changes regularly, with fillings such as salted caramel, raspberry custard, matcha, black-sesame custard and adzuki (red bean) on rotation.

The doughnuts and fillings are vegan, GMO-free, organic and gluten-free – pretty special for a snack that’s traditionally made with flour, eggs and dairy. It took Ozone hundreds of attempts to achieve the right texture and harness the unpredictability of sourdough, but she was motivated by a friend’s young son. “He saw our baked doughnuts, but he couldn’t eat [them] due to his allergies. His sad face stuck in my mind,” she says.

Around the same time, she was also plagued by her own allergies. “I was always tired, my stomach wasn’t feeling well, sometimes I even vomited. I found I had allergic reactions to gluten, dairy and eggs.”

A new diet was easy enough to follow, but she didn’t like that it isolated her from her husband. “We love eating. With the new diet, joyful dinnertime became melancholy. My husband saw me and felt pity. He thought I could create recipes that both of us could eat and I was encouraged to try.”

The couple became vegan, finding healthy alternatives to the Japanese food they loved. Spurred by customer curiosity about the vegan food they eat at home, Ozone and Haga have added gluten-free vegan sushi to the menu, using tamari as an alternative to soy sauce and ingredients such as flame-grilled eggplant to approximate eel. Even the breadcrumbs on the fried tofu are gluten-free, made from rice bread they bake in-house.

Ozone acknowledges that it’s a tough time to open a bricks-and-mortar store – when Broadsheet visits, empty shopfronts pepper the retail strip – but because they had already signed a lease before coronavirus lockdown, they went ahead. The community surprised them. “People came,” says Ozone. “There were so many people in the queue outside, regular customers coming to support us.” 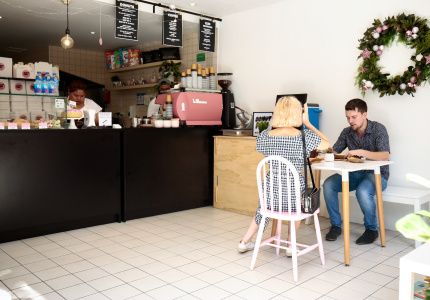