At the end of the laneway there are Margaritas, rare Mexican spirits and good times at Cantina Ok! – by the guys who brought us Tio’s. 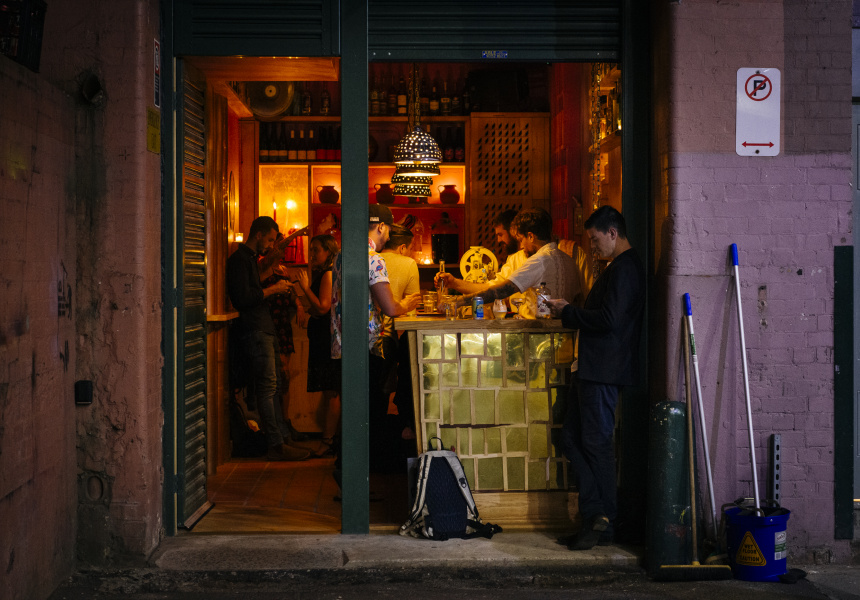 Cantina Ok!’s first potential customer of the day walks in. He’s a middle-aged dude in a stripy pink shirt and business pants. “What are you guys doing here?” he asks.

It’s a fair question – it’s not entirely clear what’s going on inside this tiny garage at the end of a delivery laneway manned by three jovial and variously bearded barmen in white aprons.

To passersby, it was once nothing more than a closed roller shutter. Now there’s an earthy-pink and pine-lined room adorned on almost all sides with bottles of clear spirits, an ornate Nepalese ice-carving machine, a few tubs of homebrew liqueurs and not a single stool or chair. The soundtrack? Afrobeats. And all of it squeezed into a space that would struggle to accommodate a football team.

“I told him we’re a 20-seater cocktail bar specialising in the rare spirits of Mexico, a micro mezcal Mecca. He said, ‘Oh cool, I’m coming back’, but he had his AirPods in so I don't know if he was on the phone and just saying, ‘Ah cool’ to his friend’,” says Alex Dowd, the white-aproned barman who responded.

That guy probably will come back, as will a lot of other people, even if they don’t really know or love mezcal. There’s something special about this place. And, once they order a drink they’ll realise this is a venue run by people who not only love what they’re serving, but know how to distil that love into fun.

The team is Alex Dowd and Jeremy Blackmore, who own another Mexican-spirit-loving bar, Tio’s Cerveceria, and the venue manager, former casual distiller and mezcal PhD student Alex Gilmour (who goes by Happy and is also a former Tio’s manager).

Last year the three of them traversed three Mexico states to sample, document and eventually import the land’s most interesting mezcals. These make up the Cantina Ok! menu, which is represented with an astoundingly well-designed, film-shot booklet that lists just one mezcal per page and features works and images detailing how they’re made, who made them and where they’re from.

Dowd understands that for many people this might be intimidating, particularly considering many people don’t even know what mezcal is let alone raicilla (a distilled spirit from the south-western portion of the Mexican state of Jalisco), or the difference between Puebla and Oaxaca styles.

Dowd, Blackmore or Gilmour will talk you through it all when you’re at Cantina Ok!, but for now, with their help, we’ve put together a quick mezcal explainer.

What is mezcal?
It’s a Mexican clear spirit made from the agave plant. Or, as they all say at Cantina Ok!, “It's the roastey-toastey, wild, earthy expressive spirit of Mexico.” It can be made from more than 50 different agave species and is, still to this day, primarily made by small producers the same way it was done 200 years ago. Generally, the process involves roasting the plants’ hearts in a pit oven, mashing what’s left and letting it ferment. The liquid collected is double distilled and bottled.

What’s the difference between tequila and mezcal?
They’re both agave-based spirits but they come from different varieties of the plant. Tequila is from the blue agave and mezcal is from up to 50 different other kinds.

Confusingly, tequila was once considered a variety of mezcal. “Mezcal used to be the catch all for all agave-based spirits, but once mezcal become DO protected [denomination of origin means it can’t be called mezcal unless it’s made in specific Mexican states] … now tequila is not a mezcal,” says Blackmore.

There are a lot more agave spirits. Cantina Ok! even serves one, raicilla, a spirit from Jalisco.

How do you drink it?
Traditionally, straight. If you order one that way, they’ll serve it with a cube of fresh watermelon dressed in larb spices. “As a way to extend generosity and as a bit of a palette cleanser as well,” Dowd says.

What does it taste like?
That’s a hard one to answer. Mezcal can be made from 50 different plants and even more production methods. The trio says it can be radically different even in neighbouring towns. “It's such a guerrilla way to make spirits. A lot of these guys are making alcohol by any means necessary; a lot of them operating with a home economy,” says Dowd. “When we ask them why they make it that way, they say, ‘I don’t know, that’s how my dad did it’.”

On top of that it is one of the most complicated food or drinks on earth. Like wine, coffee and chocolate, mezcals can have very different flavour and aroma compounds. “Every time we go deeper in, it’s like we know nothing, and we've been working on this for 10 years and we fucking barely know anything,” says Blackmore.

If you Google it, you’ll see a lot of people say it’s smoky, and lots of them are, but not all of them. Some are floral, some are sour and some taste like rolls of sun-dried Korean squid. We tasted a few with Dowd, Blackmore and Gilmour and we’re all the more confused, and excited, by it.

This is what they say:
Wahaka Mezcal Espadín: “Peppery, dusty, smooth; a bit like warm toast.”
Derrumbes San Luis Potosí: “It’s like green capsicum. Very plant-y.” “A bit hoppy.”
Avelino Soto Colin Michoacan: “Sour, pithy, a ferment vibe, like a yeasty vibe.” “There’s something I had as a kid like this, a Roll Up?” “It’s dry.”
Lobo de la Sierra Raicilla: “Highly perfumed, almost musk stick, lavender.” “Very women’s bathroom.” “Very soft bag in the cigarette ash tray, you know when you’re in your nan’s car?” “Like a bottle from your mum’s cupboard that’s been in there for a few months, years.”

What’s the alcohol content?
“Legally it needs to be between 35 and 55 per cent, we think most mezcal is best expressed at over 45. Alcohol carries flavour, much like fat and acid. The higher the octane, the more expressive they tend to be,” says Dowd.

Is there anything else I should know?
Mezcal isn’t the only thing offered here. There are four cocktails, including one of the city’s best Margaritas – it’s made with shaved ice and is smoky and superbly balanced. There’s also a tightly curated list of beers and a few wines. “We don't want this to be a tasting room where it’s all serious and Happy takes you through eight shots of rare mezcal. If you want to come in for a Margarita, you can. There's no pressure to try something weird, but if you want to try a mezcal you've never seen before then every person here will be able to tell you everything about it,” says Blackmore.

There’s no food (there’s no kitchen) but getting food from any delivery service is welcomed. And, rare for a CBD bar, it’s open late for all of the above.

Oh and, mezcal isn’t a stimulant, neither is tequila – that’s a myth. It’s all alcohol. “I've never seen a study that says tequila is not a depressant. I would love that to be the case, I always have a great time on it,” says Happy.

This article first appeared on Broadsheet on March 8, 2019. Menu items may have changed since publication.