The Next Evolution in a Fine-Diner-Turned-Neighbourhood Wine Bar Photography: Courtesy of The Bishop
1/15 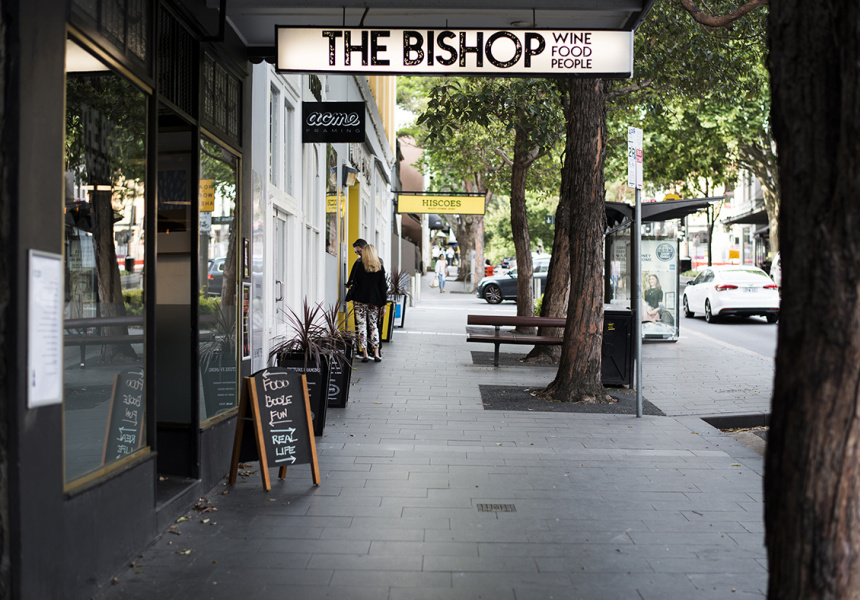 Last year Surry Hills’s Bishop Sessa had a metamorphosis, transforming from a fancy restaurant into a more casual wine bar. After six years owner Ezra Gordon thought it was time to try something different. “I didn’t shut Bishop Sessa down because I got bored; I shut it down because it just wasn’t commercially viable anymore,” he says.

He renamed it The Bishop, replacing the space’s elegant velvet banquette seating with plush emerald green bar stools and timber tables to match the more relaxed and intimate experience. Also out was the degustation and three-course menus, and in came small share plates.

Former head chef Troy Spencer was given the freedom to create a seasonally changing menu using locally sourced produce. Spencer, who was the former co-owner of Newtown’s Spencer Guthrie, was lured back from Yarra Valley’s TarraWarra Estate where he was executive chef.

Dishes might be potato gnocchi with octopus, crab butter and ’nduja, or hot-smoked trout with a celeriac and apple remoulade. There’s also daily fish and meat dishes, plus a charcuterie and cheese selection. “We want there to be the same care and attention to detail, the same quality service, but we need to dress it up in a way that’s affordable and repeatable,” Gordon says.

They’ve nailed that with dishes such as the kumato wedges served with stracciatella, which is nuzzled into basil oil and scattered with a confit of garlic and thyme.

One thing that has stayed the same though – and is now the star of The Bishop – is Bishop Sessa’s extensive wine list, which features over 200 bottles and 30 wines by the glass. Gordon has expanded that list with more natural wines and less commonly known varietals.

But if wine isn’t your style, there’s a fun cocktail selection. Choose your poison – bourbon, gin, scotch, vodka, or a combination of them – and the bar will mix up a TWAT (triple with a twist).

There's a two-hour bottomless brunch (which includes beer and wine – choose from sparkling, white, rosé and red), with the good times kicking off at 11am. The menu is banquet-style, so you and your fellow diners can graze on granola; tarts with smoked tomato, poached egg and hollandaise; an omelette with salumi and fermented chilli; and sausage, hash browns and mushy peas. Finish off with crumpets spread with maple butter and topped with blood plum.

On Fridays there’s also aperitivo specials from 4pm to 7pm, with complimentary stuzzichini and a range of two-for-one drinks, which includes prosecco, Negronis, Camparis and Aperol Spritz.

The Bishop also hosts wine tastings, with an option to put in a takeaway order through Gordon’s online wine store, Carboots Wine.

This article first appeared on Broadsheet on March 7, 2019. Menu items may have changed since publication.